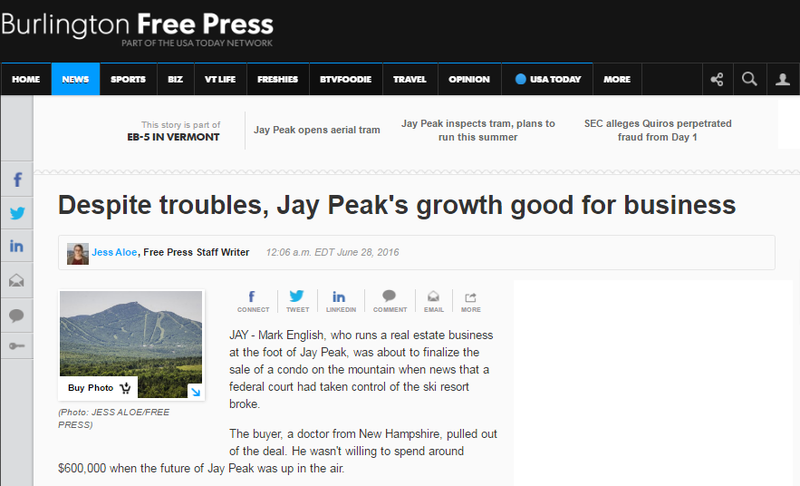 Mark English, who runs a real estate business at the foot of Jay Peak, was about to finalize the sale of a condo on the mountain when news that a federal court had taken control of the ski resort broke.

The buyer, a doctor from New Hampshire, pulled out of the deal. He wasn't willing to spend around $600,000 when the future of Jay Peak was up in the air.

The economic outlook of Orleans County, which contains Jay Peak and multi-million-dollar EB-5 projects like an ice arena and waterpark, is mixed. The county has fewer employed people than it did in 2008, when the EB-5 program began. The county also has fewer people in the labor force overall. Despite this decline, the business owners clustered around Jay Peak say the developments have turned the mountain into a year-round destination and helped them grow.

"The summer months here were an absolute ghost town," English said. Now he sees a steady stream of cars rumbling past his little office, heading to weddings, the golf course and hockey tournaments. Those increased visits, he said, are the result of the improvements former Jay Peak CEO Bill Stenger made on the mountain.

Close to 2,000 people came to the area on June 17 for the Porsche Club of America's annual Porsche Parade, according to Jay Peak's director of communication, JJ Toland. They stayed at the resort for nine nights.

"It was like having the Christmas holiday week in June," Toland said. "It was the best of all possible jump starts to the fiscal year."

"If they hadn't created a world-class resort, they wouldn't have come," English said of the Porsche enthusiasts.

In April, the Securities and Exchange Commission filed a complaint against Ariel Quiros, who bought Jay Peak in 2008 and promptly began raising money through the EB-5 program, and Stenger. The complaint alleged an elaborate fraud that put investors' money in Quiros' pockets. The fraud accusations also concern the improper use of the money, where dollars raised for one project went to another.

While many of Jay Peak's projects were completed, the nearby city of Newport has a hole in the ground along a bustling city street, the site of one of Quiros's EB-5 projects. The future of the site is uncertain.

Stenger and Quiros have denied the allegations in the government’s civil complaint.

Proponents of EB-5 promise more jobs, both directly at the projects and at nearby businesses.

Under the EB-5 program, a foreign national can invest $500,000 in a project in an economically depressed area and get a conditional visa. If that investment can be traced to 10 jobs, the conditions are lifted.

"At our height last season, I believe we tipped over the 1,200 employee mark," Toland said.

Part of the reason is because the county's workforce itself is shrinking. There were 550 more people counted as employed in the state's numbers in 2008 than there were in 2015, despite the lower unemployment rate.

But according to the state's 2014 economic and demographic trends report, Orleans County is one of nine Vermont counties experiencing a declining workforce. The state blamed stagnant population growth and the aging of the state. The state has also spoken highly about the economic impact of Jay Peak, saying in the 2014 report that the EB-5 investment had the potential to transform the region.

The problem, said Holly McKeown, who co-owns the Jay Village Inn and Restaurant with her husband, J.R. Hamel, isn't a lack of available jobs, but available workers.

"I can run an ad for a month," she said. She's been looking for a server to work the breakfast shift at her wood-paneled restaurant for about that long, she said.

After the SEC filed its complaint, a federal court in Miami, where Quiros lives, put the resort into receivership and appointed Michael Goldberg to oversee operations. Goldberg has said he plans to sell the resort as soon as possible.

"Someone will buy it and then we'll come out of the darkness and things will get better," Mark English, the real estate agent, said. When he first moved to Jay, the area was a mom-and-pop ski area, not the well-known resort it is today.

The uncertainty of who will buy the mountain has left local businesses — many of which rely completely on the tourism the resort brings in for survival — in a state of waiting.

"We consider the mountain our big brother," said Hamel.

Both Hamel and his wife, McKeown, said the EB-5 funded projects have led to better business at their restaurant. Stenger and Quiros, said McKeown, put the mountain on the map.

"It is the centerpiece of this area and we need them," Hamel said about the mountain. "We need them to be strong."