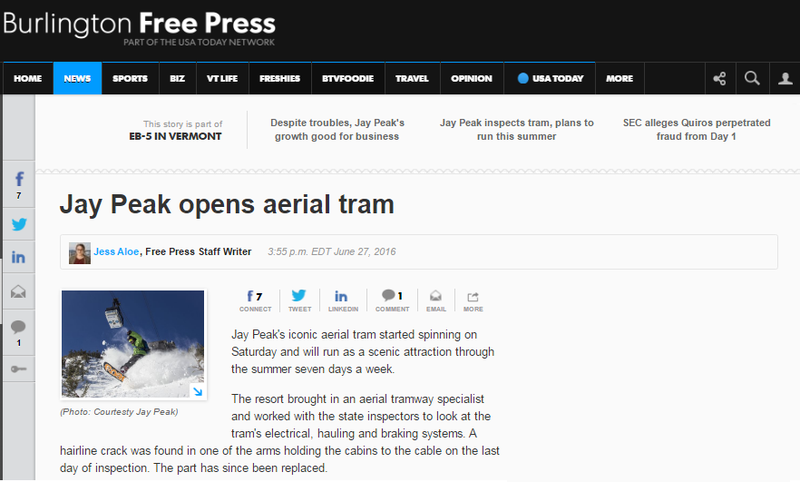 Jay Peak's iconic aerial tram started spinning on Saturday and will run as a scenic attraction through the summer seven days a week.

The resort brought in an aerial tramway specialist and worked with the state inspectors to look at the tram's electrical, hauling and braking systems. A hairline crack was found in one of the arms holding the cabins to the cable on the last day of inspection. The part has since been replaced.

Jay Peak recently signed a $5 million contract with a lift manufacturer, the Doppelmayr Garaventa Group, to make upgrades to the tram's electrical systems. The installation of the upgrades will begin in the spring of 2017.

The needed repairs on the tram became a pressing issue as Jay Peak was placed into federal receivership after the Securities and Exchange Commission alleged the resort's owner, Ariel Quiros, and CEO, Bill Stenger, misused hundreds of millions of dollars raised through the EB-5 program, which allowed foreign nationals to gain U.S. residency after investing half a million dollars into a project in an economically depressed area.

"It was nice to have the tram open when the Porsche Club of America was at the resort," Steve Wright, Jay Peak's general manager, said on Sunday. The resort has spent the last four months preparing for the car club's festival.

Wright said the event was a success and a good start on what he hoped would be a very successful fiscal year.