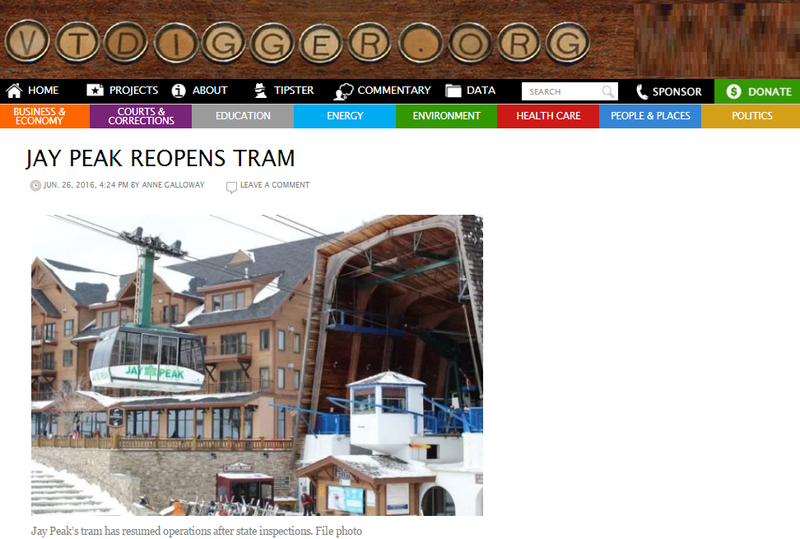 The aerial tram at Jay Peak Resort reopened Saturday. The tram was shut down at the end of the ski season this spring when state officials determined that it needed to be repaired before it could resume operations.

On Friday state inspectors approved operations for the tram, which is the only lift access to the peak of Big Jay. The tram is central to ski operations in the winter and is an important tourist draw in the summer.

Inspectors were on site Friday to examine the replacement of a component in one of the tram carriages that had a hairline crack, according to resort officials. In a previous, two-day inspection by the Vermont Department of Labor, the tram passed an evacuation drill and load tests. Inspectors also found that towers and bolting structures were operating normally.

Inspection reports were not immediately released and will not be available to the press until Monday afternoon or Tuesday morning, according to state officials.

Early this month state officials ordered the resort to stop running the tram and issued “an order for corrective action” requiring the resort to replace key components, including the brake and electrical systems.

The resort brought in an aerial tramway specialist to examine the tram and operating systems, according to a news release from Steve Wright, the general manager of the resort, who formerly served as its marketing director.

“The inspection process went really smoothly,” Wright said. “Our lift maintenance team’s efforts, along with the rigor and responsiveness of the state’s inspectors, allowed the process to move efficiently and get the tram open in June, which historically has been our goal.”

The tram was open for the last few days of the 10-day Porsche Club of America convention, which brought 2,000 Porsche owners to the Northeast Kingdom from June 17 to 27, according to Wright. The group used the Northeast Kingdom International Airport for an autocross race; a 12,000-square-foot tent was erected at Jay Peak for banquets and technical seminars; and the convention headquarters was in the ice arena.

Jay Peak signed an agreement with the Porsche Club of America in August 2013 to host the event, according to the news release. Wright described the event as the biggest single booking in the resort’s history. “When you add a piece of conference business like the Porsche Parade to the busiest summer wedding season on record and throw in three to four concert events all designed at driving lodging compression, you get the best of all possible jump starts on a very hopeful fiscal year,” Wright said.

A federal judge approved a $4.9 million contract with Dopplemayer/Graventis to manufacture and install parts for a new electrical system for the tram. The project will take seven to nine months. The state has now determined that the tram can operate in the interim.

The tram was originally authorized to carry as many as 60 people at a time. After inspectors identified safety concerns last fall, it allowed the resort to load a maximum of 45 people on the tram.

Ariel Quiros and Bill Stenger, the resort’s developers, deferred repairs to the tram. The state told Stenger that repairs had to be made last September, but he did not move ahead with plans to replace older components, and as a result the Department of Labor shut down the tram earlier this month.

In April, the Securities and Exchange Commission brought fraud charges against Quiros and Stenger. The two are accused of misusing more than $200 million that foreign investors in the EB-5 visa program put up for projects at the resort and in Newport.