Report On Jay Peak Tram To Be Released This Week 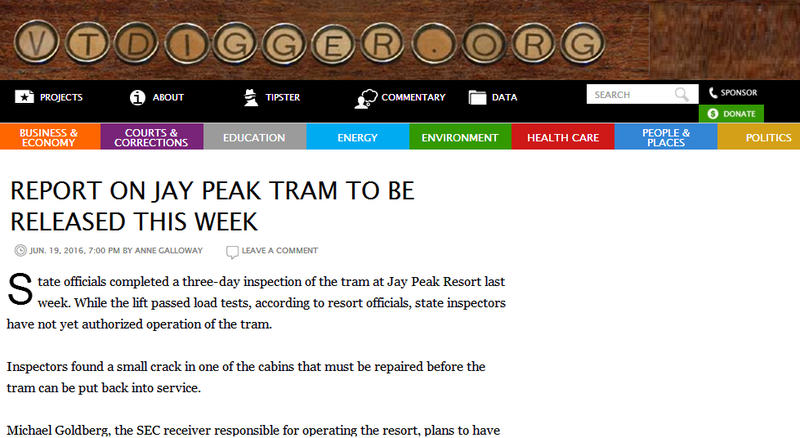 State officials completed a three-day inspection of the tram at Jay Peak Resort last week. While the lift passed load tests, according to resort officials, state inspectors have not yet authorized operation of the tram.

Inspectors found a small crack in one of the cabins that must be repaired before the tram can be put back into service.

Michael Goldberg, the SEC receiver responsible for operating the resort, plans to have the repair, at an estimated cost of $12,000, completed by June 27. “We are confident though it will be open to the public by the time our weddings resume the weekend of July 2,” Goldberg said by email.

“We have completed a successful evacuation drill and passed the required load test,” Goldberg wrote. “The inspectors however, did ask us to complete one repair of the cabins before conducting their final review.”

The lift will not be ready for the Porsche Convention to be held this week.

Earlier this month, state officials ordered the resort to stop running the tram and issued “an order for corrective action” requiring the resort to replace key components, including the brake and electrical system. The tram, which is the only lift that takes visitors to the top of the mountain, hasn’t been used since the end of the ski season.

Steve Wright, the general manager of the resort, said in a press release that the tram passed the load test. The electrical, hauling and brake systems functioned normally “under strenuous conditions,” according to Wright. The tram’s towers and bolting structures were also “operating normally,” he wrote.

An engineer’s report and an inspector’s report from the Vermont Department of Labor is expected to be released by Tuesday or Wednesday. Until then, Stephen Monahan, the director of the Workers Compensation and Safety Division, says he will not comment except to say the “prohibition against operating” the tram remains in place for the time being. Monahan has said it would likely be August before it’s operational.

A federal court judge approved a $4.9 million expenditure for the full cost of the repairs. The electrical system will likely take seven to nine months to complete.

The tram is the only lift system at Jay Peak that carries people to the top of the mountain. It was originally authorized to carry as many as 60 people at a time. After inspectors identified safety concerns last fall, it allowed the resort to load a maximum of 45 people on the tram.

Ariel Quiros and Bill Stenger, the resort’s developers, deferred repairs to the tram. The state told Stenger repairs had to be made last September, but he did not move ahead with plans to replace older components and as a result the Department of Labor issued a plan of corrective action earlier this month.

In April, the Securities and Exchange Commission brought fraud charges against Quiros and Stenger. The two men are accused of misusing more than $200 million that EB-5 foreign investors put up for projects at the resort and in Newport.