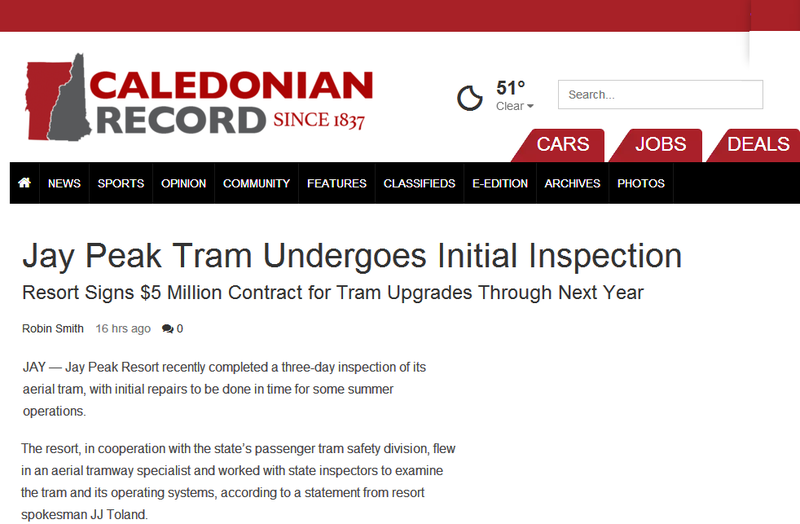 Jay Peak Resort recently completed a three-day inspection of its aerial tram, with initial repairs to be done in time for some summer operations.

The resort, in cooperation with the state’s passenger tram safety division, flew in an aerial tramway specialist and worked with state inspectors to examine the tram and its operating systems, according to a statement from resort spokesman JJ Toland.

Inspectors conducted a successful load test designed to ensure that all of the conveyance’s electrical, hauling and braking systems can function normally under strenuous conditions, Toland stated.

The team also inspected the tram’s towers and its bolting structures. All were found to be operating normally, Toland stated.

Engineers did find on the last day of the inspection a hairline crack to one of the components of one of the tram carriages. That part will be removed and replaced next week.

After that work is complete, state officials will return for a final review before considering whether to allow the tram to operate this summer.

“The resort has a long history of cooperation with the state’s lift inspectors and it’s their rigor and responsiveness that has allowed this process to move so efficiently.”

The resort recently signed a $5 million contract with the Doppelmayr/Garaventa Group to conduct custom upgrades to the tram.

That work isn’t scheduled to begin until the spring of 2017 and is not required for operations this summer or for the coming winter, Wright said.

Wright said Doppelmayr/Garaventa will begin work on the enhancements shortly as the improvements are all customized and will take approximately 12 months to complete. Installation of the upgrades will begin in the spring of 2017.

The state passenger tram safety division issued an order earlier in June to require that the tram not operate after the ski season ended until essential repairs and safety inspections were completed and progress begun on the upgrades required on the 52—year-old tram.

The resort officials had planned to begin the work this spring but that was delayed due to the takeover of the resort by the court-appointed receiver.

A federal court judge named a receiver to run the resort until it can be sold after owners Bill Stenger and Ariel Quiros were named in a lawsuit by the U.S. Securities and Exchange Commission which claims that Stenger facilitated the misuse by Quiros of $200 million in EB-5 foreign investments and fraud involving $50 million.

The receiver had asked for and received permission to invest $5 million plus in the tram to keep it operational.