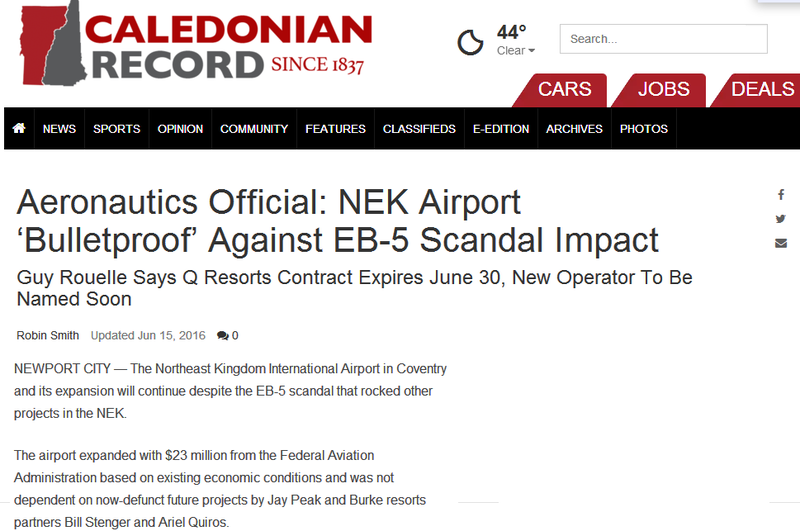 The Northeast Kingdom International Airport in Coventry and its expansion will continue despite the EB-5 scandal that rocked other projects in the NEK.

The airport expanded with $23 million from the Federal Aviation Administration based on existing economic conditions and was not dependent on now-defunct future projects by Jay Peak and Burke resorts partners Bill Stenger and Ariel Quiros.

Guy Rouelle, Vermont aeronautics division administrator, told Newport Rotary Tuesday that the airport is fully operational and not connected to the downfall of the future plans by Stenger and Quiros.

“We are pretty bulletproof at the air field,” Rouelle said.

The state will formally sever ties with Q Resorts and Quiros as of June 30, when an agreement signed by the state and Quiros in 2012 and renewed in 2014 to run the airport ends and will not be renewed, Rouelle said.

A new fixed-based operator of the airport will be named soon, he said.

Meanwhile Dan Gauvin of Lakeview Aviation, who has run the airport for Quiros since 2012, will continue his work, Rouelle said.

“We are invested in ensuring that Dan’s operation continues to tool along,” Rouelle said, with Gauvin, a Rotarian, sitting at his side.

He called Gauvin’s business “one of the best aviation maintenance facilities in New England.”

The state plans to put together a diverse committee of economic and planning representatives from local and regional organizations to identify businesses or groups that would work with the state to build a new terminal, a critical facility to make the airport truly international.

Stenger and Quiros were planning to build a terminal and bonded warehouse at the airport with their own funds, not EB-5 investments. A federal court judge pulled the plug on future EB-5 foreign investment projects by Stenger and Quiros after the U.S. Securities and Exchange Commission filed a lawsuit in April that accuses Stenger of facilitating misuse by Quiros of $200 million in foreign investments and fraud involving $50 million.

The court appointed a receiver to operate the resorts and other properties until they can be sold to repay investors, creditors and contractors.

Rouelle said the state is working almost daily with the receiver and his staff to make sure that obligations at the airport are met by both sides.

The state took over the expansion and operation of the new fuel farm at the airport from Q Resorts, which allows the airport to attract larger planes for refueling at better rates, Rouelle said.

One of the state’s obligations is hosting an event for the 2016 Porsche Parade, which will be held at Jay Peak Resort. By agreement the Porsche Parade will hold a two-day skilled driving event at the airport facility next Wednesday and Thursday. The airport will be closed to the public during that time.

The state is “making good on that promise,” Rouelle said.

Meanwhile, the work underway at the airport will prepare it for anticipated commercial and scheduled air service, Rouelle said.

Some have questioned whether the airport would ever be used to the capacity that Stenger once envisioned of having scheduled passenger flights.

The expansion and FAA investment was the result of economic development that had already occurred and was not based on future projects that are now defunct, Rouelle said.

Growth at Burke showed up several years ago when it went from a quarter million visitors each winter to 2 million two years ago, not counting last year which was a poor ski season, he said.

Rouelle said that another small state airport in Morrisville was recently upgraded and this spring began handling commercial passenger flights by Tradewinds from Morrisville to White Plains, N.Y., with a 20-minute bus connection to Long Island, N.Y.

That’s the kind of service that could develop at the NEK International Airport, as users of the Jay Peak and Burke resorts seek easier access by air, Rouelle said. A terminal is critical to offer regular U.S. customs and port of entry clearance to make the airport truly international.

Rotarians asked if they could sponsor or organize a fly-in at the airport, which Rouelle welcomed.

One Rotarian pointed to the benefits of a working airport, where a 18-hour round-trip, overnight drive to Presque Isle, Maine, turned out to be only a 3.5-hour, round-trip plane trip courtesy of Gauvin.