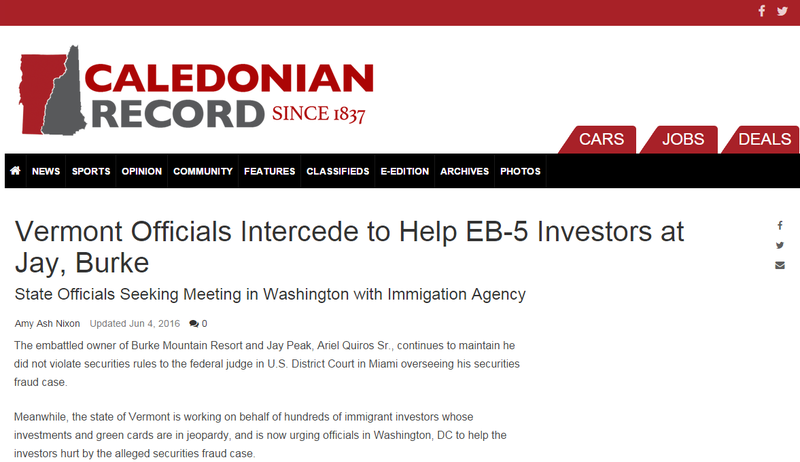 The embattled owner of Burke Mountain Resort and Jay Peak, Ariel Quiros Sr., continues to maintain he did not violate securities rules to the federal judge in U.S. District Court in Miami overseeing his securities fraud case.

Meanwhile, the state of Vermont is working on behalf of hundreds of immigrant investors whose investments and green cards are in jeopardy, and is now urging officials in Washington, DC to help the investors hurt by the alleged securities fraud case.

Quiros and his business partner in the Northeast Kingdom Economic Development Initiative, Bill Stenger, face dozens of federal securities violations charges by the Securities Exchange Commission (SEC) and the Vermont Attorney General in connection with an alleged Ponzi-like scheme the two are accused of carrying out since 2008.

The immigration status of hundreds of investors is in jeopardy because the pair built their resort empire in the Northeast Kingdom using EB-5 funds of more than $395 million in the immigrant investor program which sees foreigners pledge half-million dollar investments in exchange for earning eventual green cards; the granting of the green cards is linked to job creation in the projects.

In a recent letter to the US Citizenship and Immigration Services Investor Program Office in Washington DC, Vermont Agency of Commerce and Community Development Secretary Patricia Moulton wrote on behalf of Vermont’s Regional Center for the EB-5 federal program, “…to advocate for all Jay Peak EB-5 investors currently in the immigration petitioning process for Jay Peak Phases I through VIII.”

Moulton, contacted by the newspaper this week, said she has not had a response to her May 24 letter to the USCIS Investor Program Office, as well as the Office of Public Engagement, also in Washington, DC.

In mid-April both the SEC and the Vermont Attorney General filed coordinated legal complaints against Quiros and Stenger, alleging they had misappropriated more than $200 million in EB-5 investor funds.

Quiros is additionally alleged to have taken another $55 million plus to fuel his lavish lifestyle, including two luxury condominium purchases in New York City and more.

The allegations at this juncture remain civil, but both state and federal authorities have said on the record that the case, as it progresses, may end up with criminal charges.

“As you are well aware, the State of Vermont initiated a civil action alleging investor fraud at EB-5 projects run by Jay Peak,” Moulton wrote to federal immigration officials in Washington last week. “Since December 2014, Vermont’s EB-5 Regional Center, in partnership with the Vermont Department of Financial Regulation, has been conducting an in-depth financial review of the aforementioned projects. The U.S. District Court appointed a receiver who has assumed control of all Jay Peak assets and is in the early stages of seeking to stabilize the business operations, coordinate with the EB-5 investors, and develop a plan to meet the investors’ immigration requirements and protect their investment.”

Moulton continued, “Given the unique circumstances of this particular alleged fraud, we trust USCIS will acknowledge the verifiable job creation that exists in several of the Jay Peak projects as well as the associated quality of the underlying assets and income streams. Taken together, these tangible and definable measures provide Jay Peak EB-5 investors and, ultimately the USCIS, the optionality to formulate favorable investor outcomes.”

To try to help the investors ultimately obtain their green cards as the federal and state fraud case against Quiros and Stenger advances, Vermont officials have made “several reasoned proposals” to federal immigration officials, citing: public policy concerns, what the state terms ‘job pooling concept,’ transferring investors to other projects within the NEK Economic Development Initiative of Quiros and Stenger in order to show the needed job creation for the investors to obtain their green cards, and the coordinated effort between the receiver, the USCIS and the Vermont Regional Center.

“We recommend that USCIS designate ‘extraordinary exemption status’ to all Jay Peak EB-5 investors given that the fraud perpetuated upon these investors, which was implemented by the projects’ principals, was not of their doing,” Moulton asserts to federal officials on the immigrant investors’ behalf.

The USCIS “could conceivably choose to make policy in this extraordinary situation, especially if the business plan is executed and job creation is achieved or progressing as planned,” suggested Moulton.

The concept of job pooling, Moulton explained in her letter, would allow numbers from excess jobs created in the Jay Peak earlier projects completed to count toward the later ones where there is a shortage of job creation in the end to meet the requirements of green cards not yet issued for investors caught in the aftermath of the fraud; she proposes that one umbrella pool the jobs beneath it to assist with the possible timing out issues and deportation faced by the affected investors.

Moulton writes, “According to our analysis, a surplus of jobs exists, thereby creating such consideration. She adds that so doing would also be “…consistent with the fact that the projects’ principals commingled money amongst the projects so that investors’ money actually did create jobs, albeit not in the intended project.”