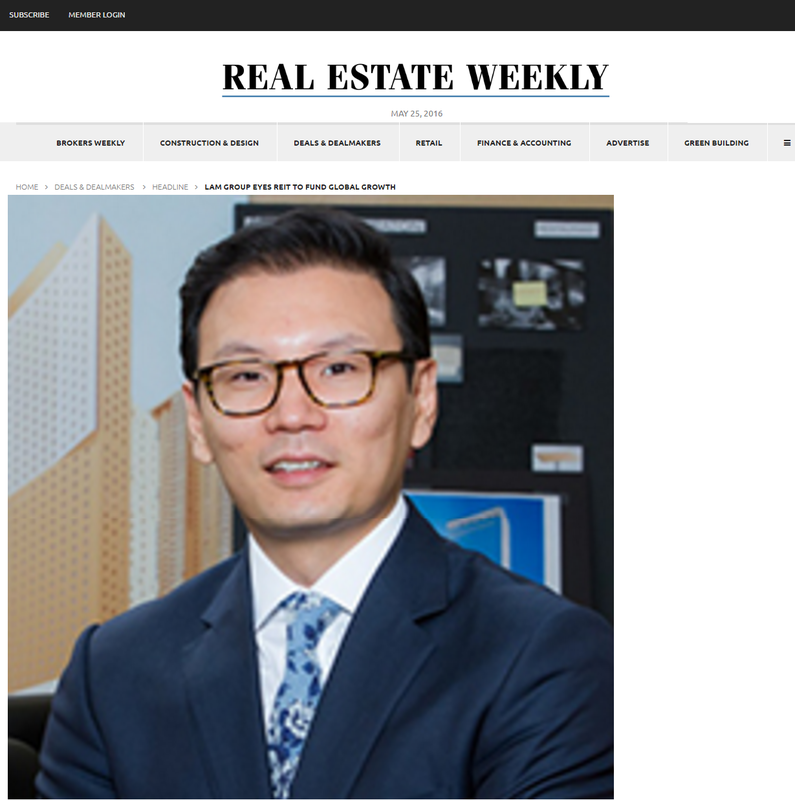 The Lam Group, a family-owned hotel developer long known for relying on its own equity, is contemplating a major shift in strategy.

Vice president Joseph Yi told Real Estate Weekly that the firm is considering the launch of a publicly traded REIT in an attempt to raise more money and compete in an increasingly global investment market.

“Ultimately we know we need to tap alternative sources of capital,” said Yi. “If public companies can tap public money to fund their growth, it’s only natural for us to look at that as well.”

The idea of a public Lam REIT is hard to reconcile with the firm’s reputation as a conservative, low-key family investor — an image best encapsulated by its Chinatown office.

A company’s office can say a lot about its culture. To reach The Trump Organization’s headquarters in a glassy Midtown skyscraper, a visitor has to enter through a palace-like lobby with marble-covered walls and elevator doors glistening in gold.

Douglas Durst, co-owner of an organic farm and developer of environmentally friendly office buildings, oversees his real estate empire from One Bryant Park, a Platinum LEED-certified tower that recycles rain water and has its own power plant in the basement.

And then there’s The Lam Group, arguably New York City’s most prolific hotel developer. The company sits in a slim eight-story, pre-war building in Chinatown, surrounded by bargain restaurants and a car park. At the front door, no name tag points to the building’s famous tenant. The narrow corridor leading to a single elevator has the worn-down charm of your grandmother’s apartment building.

Once upon a time, the building at 202 Centre Street housed John Lam’s garment factory, after the immigrant from Hong Kong had worked his way up from factory worker to manager to owner. Later, when Lam became a full-time developer, he moved his offices into the building, adding two glassy, modern floors to its top.

That The Lam Organization is still headquartered at 202 Centre Street is a sign of the pride John Lam takes in his humble origins – an all-American tale of bootstrap-pulling he likes to recount at length. It also says a lot about the company’s indifference to the vanity circus that is New York’s real estate industry.

The Lam Group has never bought a famous Midtown hotel for an eye-watering price. When most investors fall into a buying frenzy, the company usually sits still.

When others cut their losses, it often buys up land at bargain prices, as it did in the years after 2008. “As multi-generational holders, we are disciplined investors,” said Yi.

So far, the company has been a conservative investor. It always puts up the entire equity portion of its deals in cash and invests primarily in the market it knows best: New York City. But that may change.

Long focused mainly on New York City, Yi said the Lam Group is now looking to invest more heavily in other states and countries. For example, the company recently went under contract to develop a full-service hotel in California.

But in order to expand more aggressively, it needs new sources of equity. “Global growth can’t just be achieved through our talent alone,” Yi said.

Yi said the Lam Group is internally discussing the launch of a publicly traded REIT, in an attempt to become more competitive in a market flush with money. However, he cautioned that the regulatory burden of a public listing and changing stock-market conditions might still cause the company to refrain from such a move.

In a more immediate strategy shift, the Lam Group is now looking for joint venture partners on its projects – something it hasn’t done in the past.

For now, the company is still more than busy with its numerous hotel developments. Three hotels in Lower Manhattan, all on sites bought in 2007, will open by the end of this year. The company is also developing two Renaissance Hotels, one on West 25th Street in Chelsea and one on 125th Street in Harlem. The Lam Group’s largest development to date will be a 460-room Virgin Hotel at 1205 Broadway in NoMad on a parcel it bought in 2011 for $300 per buildable s/f.

These projects are part of a citywide hotel construction boom that has sparked fears that developers might be adding too many new rooms. But Yi is confident there is enough demand to meet the growing supply.

He argued New York City still has far less rooms per visitor than cities like London and Paris. More importantly, he still sees a lack of supply in the luxury market.

This is why the Lam Group is shifting away from its traditional focus on the mid- to upscale hotel market, and is developing high-end hotels like the two Renaissance projects.

While the Lam Group is currently an active developer, Yi said the company is reluctant to buy more parcels because of what he calls frothy prices.

“We bid on a lot of sites in 2014,but the competition outbid us,” he said. “However, I believe some of those sites will be available in one or two years, when the market plateaus or even goes down.”

The Lam Group may be changing the way it raises equity, but its time-tested, anti-cyclical investment strategy is clearly not up for debate.