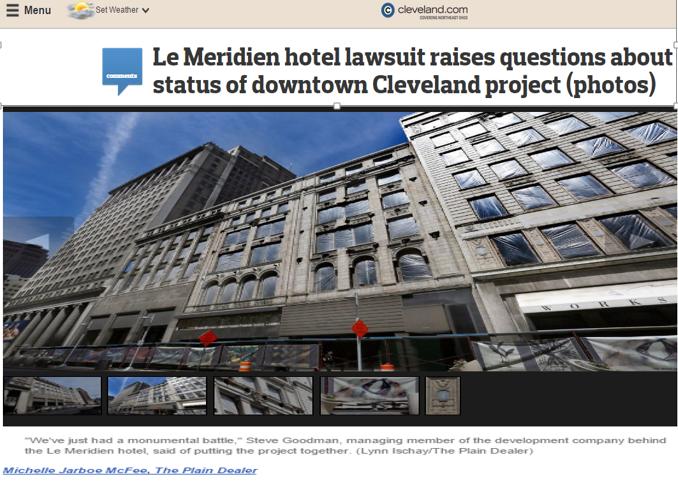 A group of local investors in the Le Meridien hotel project in downtown Cleveland has sued the developer, in a case that raises questions about the viability of a slow-going makeover on Euclid Avenue.

Seven East Side residents collectively put up $900,000 for the project in 2011. Now they claim that their "investment in what they thought would be another world-class hotel in downtown Cleveland was nothing more than smoke and mirrors," according to an April 10 filing in Cuyahoga County Common Pleas Court.

The investors are lobbing allegations of misrepresentation and mismanagement at companies tied to a California developer, various project partners and a Beachwood businessman who amassed local money for the hotel. Their lawsuit names more than a dozen defendants, scattered across the country.

Steve Goodman, managing member of the development group, called the lawsuit "meritless" in a telephone interview this week. He described the investors' claims as "bogus" and said he expects to repay them, buying out their stake in the project, within the next few weeks. "We've been given until early June to respond [to the lawsuit]," said Goodman, who lives and works in California, "and it's my hope and belief that we'll have this all settled and done with before we have to respond."

The investors' claims point to broader ambiguity about the status of a key downtown development project, one that would remake one of the last blighted stretches of Euclid between Public Square and Playhouse Square.

The 206-room Le Meridian is slated to fill the empty John Hartness Brown Building, which from the street looks like several buildings running from 1001-1021 Euclid Ave., and a neighboring building at 1101 Euclid Ave. Plans for the hotel, to be managed by Le Meridien parent Starwood Hotels & Resorts Worldwide Inc., include interior parking, a street-level restaurant and a rooftop lounge.

Goodman said façade work and construction, discussed since at least 2010, could start within weeks. That's important, since the developers face a June 1 deadline to demonstrate that they have financing and are starting renovations if they want to hang onto $11 million in valuable state preservation tax credits.

Otherwise, the state will rescind those credits, originally awarded in 2007.  The developers would have to reapply, in a competitive process that now caps awards at $5 million per project, in most cases.

Goodman said the Le Meridien financing will fall into place in stages, with the last pieces coming together in June. The hotel, he added, should open in early 2017.

"We've just had a monumental battle," Goodman said of moving from a proposal to an actual project. "A lot of loose ends. A lot of things that, I'll take the blame here, I should have done some more careful due diligence. ... We've had a lot of delays and a lot of uphill battles getting the capital together."

Yet the investor lawsuit, government documents and interviews turn up inconsistencies about the project's funding structure and timing.

For example, a financing plan provided by Goodman shows a $1 million loan from Cuyahoga County, generated from the county's share of casino-tax revenues. But the county hasn't received, much less approved, a loan application. And county records show that the building owner, a company called JHB Hotel LLC, is $113,069 delinquent on property-tax payments.

"It's an important project, so we'd like to see it get done," Ittu said. "We're really very preliminary in our look at the underwriting of it."

One of the biggest complications for the Le Meridien – and, as Goodman tells it, the cause of the most recent delays – is that the developers aren't taking out a traditional first mortgage. Instead, they're amassing a $42.5 million loan from wealthy overseas investors, who are participating in a federal program that offers U.S. residency to foreigners who put money into job-creating projects here.

Once little-noticed, that EB-5 visa program has skyrocketed in popularity during the last few years, thanks to development-financing challenges in the wake of the recession and strong overseas interest in U.S. real estate. Money from the program has flowed to local projects including the Flats East Bank and expansions at University Hospitals, through a government-designated regional center called the Cleveland International Fund, which is not involved with the Le Meridien.

Heightened demand is causing backups in EB-5 project approvals. And the government is taking a closer look at the program – up for reauthorization this year – because of some high-profile cases of fraud and misrepresentation.

On Feb. 19, the Le Meridien project finally received its approval letter from U.S. Citizenship and Immigration Services, which oversees the EB-5 program. That letter talks about a $35 million pool raised from 70 investors and a construction project with a 34-month timeline.

But Goodman said the team is raising $42.5 million overseas, from investors in Dubai, India, Vietnam and China. At $500,000 per investor, that means the pool actually would involve 85 people – who each need to create at least 10 jobs in order to receive U.S. residency for themselves and their families.

The construction timeline that Goodman laid out is shorter than 34 months – though the developers already have spent more than $4 million, including $3 million in Clean Ohio funds for site cleanup and city money from a vacant-properties program, to prepare the buildings for the hotel makeover.

Those discrepancies matter because changes to the project funding and timeline could impact the number of jobs the Le Meridien supports during construction and upon opening. Changes in the jobs figures mean increased risk for those overseas investors seeking permanent residency and greater access to U.S. health care, schools and other amenities for their families.

In an email Thursday evening, Goodman said the fluctuating figures aren't significant. "The project is the project, and we have moved this number around a couple of times," he wrote in response to a question about the differences between the $35 million figure in the letter and the $42.5 million overseas offering.

The Northeast Ohio Regional Center, based in Wooster, is the government-designated conduit for the EB-5 deal. The regional center was created in 2009 but has never done a project. Its president, Kevin Burwell, left in October and has not been replaced. Two board members at the regional center didn't return phone calls about the Le Meridien this week.

"It doesn't surprise me what you're telling me," Burwell said, when reached by phone. "But it does lead to some other questions, in my mind, about the regional center, because I don't think anybody's minding the store there."

The city of Cleveland didn't respond to emailed questions about its potential financial participation in the project.

An executive at Global X, a local company that facilitated a conservation easement on the John Hartness Brown Building, said that the developers have spent a lot of time and effort trying to make the project work.

It's a priority to cleaning up that part of Euclid Avenue ... it's also a brand and a flag at the highest level.

"But they have failed in certain key areas," Timm Judson, Global X's chief investment officer, said, pointing to the EB-5 fundraising delays as an example. "We have been tremendously disappointed with the progress in those key areas and have made our displeasure known to the developer."

In simplest terms, this type of conservation easement is a preservation tool that permanently restricts modifications to a building and, in return, generates money for the property owner through a tax deduction.

The Historic Gateway Neighborhood Corp., a neighborhood nonprofit, holds that easement and will keep tabs on the condition of the building. Tom Yablonsky, the nonprofit's executive director, said he has no doubts about the Le Meridien.

"We're very supportive of the project," he said, describing the developers and their consultants as collaborative and involved in the downtown community. "We expect it to move forward. We want it to move forward. It's a priority to cleaning up that part of Euclid Avenue ... and it's also a brand and a flag at the highest level, which is something that's good for the city. These folks brought all those things to the table. Our experience with them is that they're very real."

In the lawsuit, they claim that repeated restructuring of the project has diluted their stake, and that their money seems to have evaporated. They want to see records and financial statements for various companies tied to the project. And they want their money back, with interest.

"I believe that everything is moving along much slower than we'd like, and it creates all sorts of ancillary problems," Goodman said. "But the project is moving forward, and it's going to get built. ... We still have everybody's support.

"I think," he added, "this kind of lawsuit doesn't help." 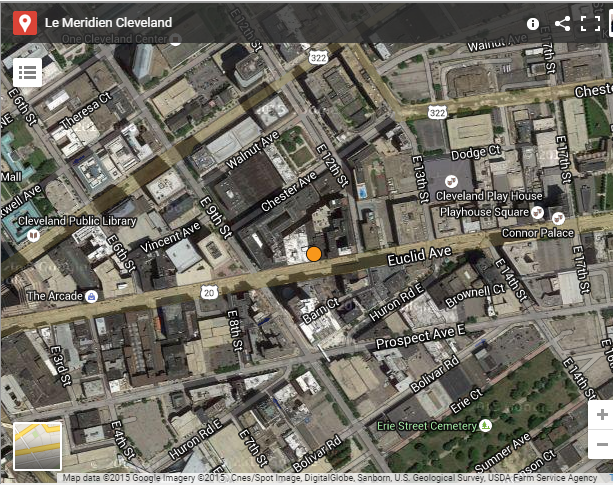