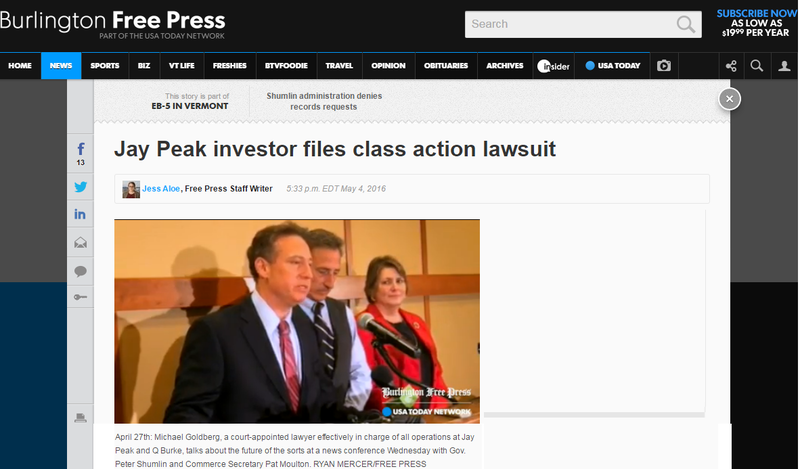 Investor Alexandre Daccache filed the lawsuit in an attempt to recover the money "misused, commingled, and stolen by Quiros and Stenger with the assistance of Raymond James and Burstein" for all the investors, according to court documents. The lawsuit accuses the defendants of violating a federal racketeering law, or the RICO Act, which was designed to fight organized crime.

"The members of the RICO enterprise had a common purpose: to increase and maximize their profits by illegally diverting funds that they knew belonged to investors for improper and unauthorized purposes. Defendants shared the bounty of their enterprise by sharing the illegal profits generated by the joint scheme," Daccache's lawyer, Tucker Ronzetti, wrote in the complaint, filed Tuesday.

Last month, the Securities and Exchange Commission, along with the state of Vermont, accused Jay Peak developer Quiros and CEO Stenger of fraud related to the EB-5 program, which allows foreigners to gain U.S. residency if they invest $500,000 in projects in economically depressed areas. Burstein and Raymond James were not named as defendants in the SEC's case.

Jay Peak and Q Burke are in federal receivership, which places them under control of Michael Goldberg, a court-appointed lawyer.

Goldberg told reporters last week he had met, directly or indirectly, with hundreds of the investors. Ronzetti said his firm was coordinating with the receiver. The two have worked together on a number of occasions.

"We look forward to working closely with the receiver and trying to make all the investors whole," Ronzetti said.

Daccache is accusing Burstein, the broker on the Raymond James account holding investor funds and Quiros's former son-in-law, of substantially assisting Quiros and Stenger and failing in their fiduciary responsibility.

Daccache, a Brazilian citizen, invested $500,000 in August of 2010, as well as paying $50,000 in administrative fees. According to the complaint, Stenger told him he could expect returns of 2-6 percent annually, despite knowing the money would be diverted for unauthorized use or the personal gain of defendants.

In return, Raymond James made more than $2 million in interest from the margin loans, according to the complaint.