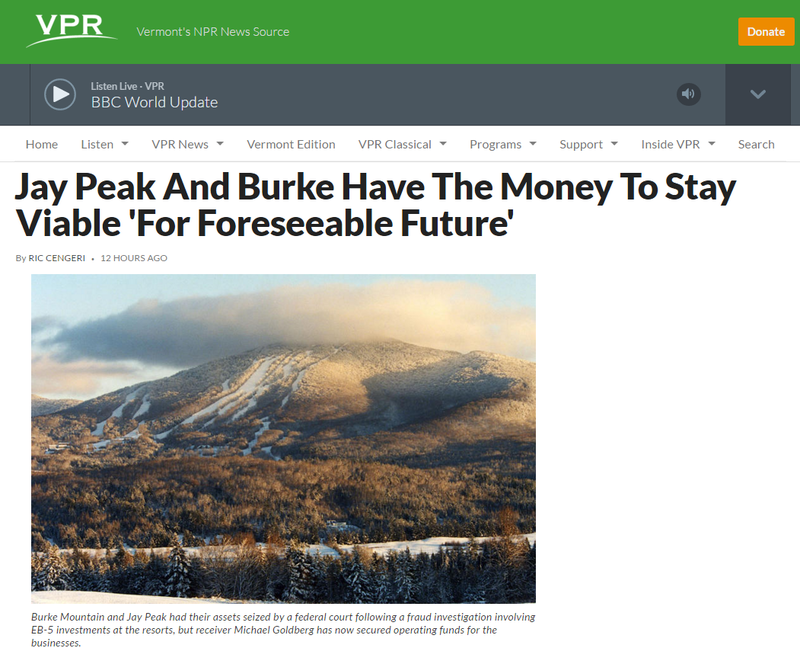 The business executive running two Northeast Kingdom ski resorts involved in a federal fraud investigation says both businesses have enough money to stay viable for the time being.

Steve Olson is chief executive officer of Leisure Hotels and Resorts. The Kansas-based company was hired by a court-appointed receiver to run Jay Peak and Burke Mountain ski resorts after federal securities fraud charges were brought against the resorts’ owners.

“The good news is that since we were able to calculate what the cash needs might be, Michael [Goldberg] has gone to the court and requested funding, and now that has been provided to us,” Olson said. “So for the foreseeable future, we have adequate funds at both resorts to operate on now.”

Jay Peak and Burke are among assets seized by a federal court following a fraud investigation by the U.S. Securities and Exchange Commission. The SEC says Jay Peak CEO Bill Stenger and owner Ariel Quiros misappropriated about $200 million of the $350 million they raised from foreign investors under the EB-5 program.

Olson said that vendors and contractors that are owed money by the resorts will soon be paid.

“The receiver has assured me that the outstanding bills related to construction and or vendors will be funded,” he said.

One contractor is owed about $4 million for work on a hotel and conference center at Burke. Olson said the facility will open in November.