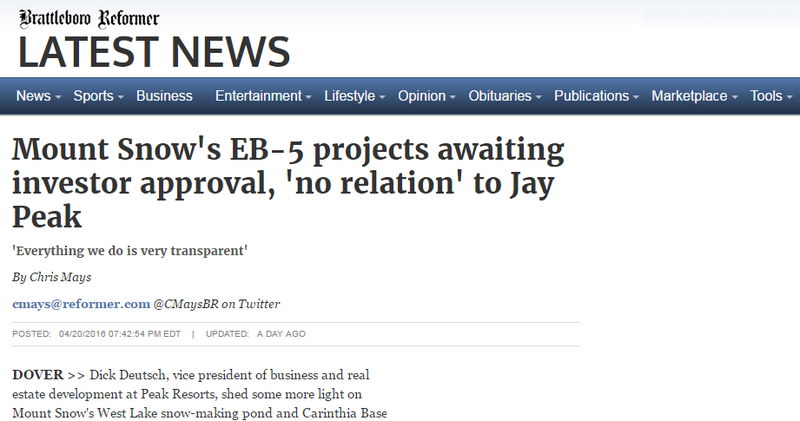 The ski resort is depending on money raised through the EB-5 program, which encourages foreign investment in projects anticipated to create jobs in the United States. It provides investors with citizenship.

"The way our memorandum is written is that when our first investor is approved by the (U.S. Citizenship and Immigration Services) then the funds that are in escrow get released," Deutsch said. "Not only does the USCIS approve the investor and their source of funds, but the USCIS also approves our project. So they kind of happen at the same time."

Troubles up north, where developers using the EB-5 program are accused of fraud totaling $200 million, does not appear to be affecting the holdup at Mount Snow. After an investigation through the Securities and Exchange Commission, Ariel Quiros and Bill Stengler are facing state and federal charges involving projects at Jay Peak Resort and in the Northeast Kingdom.

"There's no relation to Jay Peak," Deutsch said. "We're a totally different company than Jay Peak. We're publicly traded. Everything we do is very transparent. We make public filings every quarter. We're in good standing with the state of Vermont."

He attributes the long wait to the USCIS being "so overwhelmed with petitions," noting that Mount Snow wasn't the only group having this issue.

Mount Snow General Manager Kelly Pawlak previously told the Reformer the resort raised $52 million through the program and it was in an escrow account. When the money becomes available, two pump houses and a valve house would be built. An inflatable dam would be installed in Cold Brook and an underground pipe would connect West Lake to existing pipe near Haystack.

West Lake, the 120-million gallon pond and dam, was constructed last summer. A pipeline from Haystack Mountain to Mount Snow also was upgraded. These improvements are expected to enhance snowmaking capabilities. The finished work was touted by Pawlak.

"Greater pressure at the higher elevations allowed us to utilize more low-energy snowmaking equipment and make snow faster," she said. "Time after time, we were presented with short snowmaking-temperature windows and we were able to recover quickly and efficiently."

Peak Resorts spent "many millions" of its own dollars on West Lake, said Deutsch, adding that it was done in anticipation of the USCIS approving the project in the "normal amount of time."

Unfortunately, Deutsch said, he did not have a timetable for when the company could expect the funds.

"We are now in our 23rd month of waiting, which is a very long time," he said, explaining the USCIS says on their website that this process usually takes 12 to 16 months to complete. "However, we do know they have been deluged with a huge amount of petitions and there's a backlog they're having trouble keeping up with."

"It is very disappointing and it's very frustrating," he said. "But we're doing our best. Our congressional offices have been very helpful in speaking with the USCIS and we're doing everything we can to move our project through the queue."