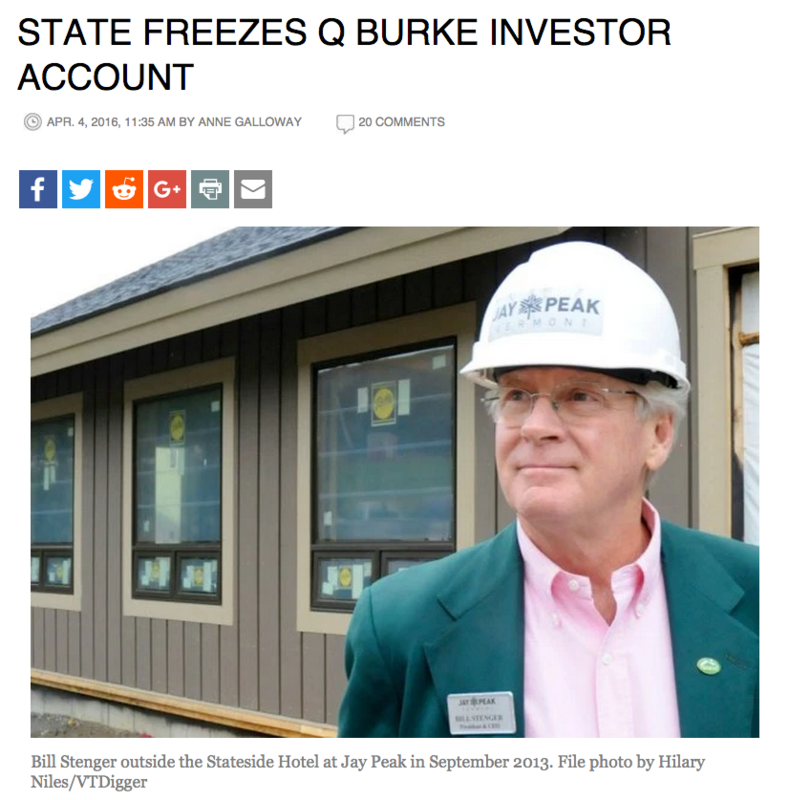 State regulators say developers of Q Burke Hotel have taken “millions of dollars in construction management” fees out of funds for a hotel project at the resort in East Burke.

Until the expenditures are accounted for, Susan Donegan, the commissioner of the Department of Financial Regulation, says an escrow account with funds from immigrant investors will be frozen. Donegan says in a Feb. 16 memo that the developers are required to contribute their own funds to the construction of the hotel and at this point has “seen no indication of such contributions.”

The exact amount of the construction management fees was redacted from Donegan’s letter.

Donegan asks the developers Bill Stenger and Ariel Quiros to explain what happened to the money and how an error in accounting was made. She requests evidence of all contributions to the project that the developer has made to date.

That information, however, has not yet been provided six weeks later, according to a March 25 communication from Donegan with Stenger, and the account remains frozen.

In an email to VTDigger on Friday, Stenger said he and Quiros “are in active discussions with the state on these and other issues and have no comment at this time.”

The developers are required to hold money from EB-5 immigrant investors in escrow under an agreement with the state until a financial review of Q Burke is complete. State officials have been requesting financial documentation from Quiros and Stenger since May 2014.

The $50 million Q Burke Hotel and Conference Center is part of a $120 million athletic center with an aquatic center, a mountain biking center and indoor and outdoor tennis courts. PeakCM is the contractor for the athletic center. According to state documents, there are 103 investors who each provided Stenger and Quiros with $550,000 for the Q Burke Hotel and Conference Center, or about $56.65 million.

While a dispute with the state over $1.1 million for Q Burke Hotel contractor PeakCM has dragged on Stenger has also argued for the release of an undisclosed sum of money for “preopening labor, preopening marketing and developer proceeds.”

In a March 15 letter to Donegan and Patricia Moulton, the secretary of commerce and community development, Stenger says the additional funds are required for operations of the hotel.

Stenger says the hotel cannot open without “trained staff and a market rollout that is professional and effective.”

“If there are reasons for preopening labor, marketing funds and developer proceeds not to be authorized I’d like to know what those reasons are,” Stenger writes.

Stenger in the memo says developer proceeds have been “denied to the developer since July” and that this “needed operational capital” was to be used for planning costs associated with the rest of the Q Burke development — the aquatic center, and tennis and mountain bike facilities. As a consequence, planning for the expansion of the resort is “stalled,” he says.

Stenger says the Q Burke Hotel developers agreed to defer access to developer proceeds “under duress,” as part of the July 13 agreement with the state.

“It is now time to authorize the release of developer proceeds as the need for these funds are urgent and they are appropriately due as part of the Private Placement Memorandum,” Stenger writes.

State officials say the “developer proceeds” are funds developers had planned to take out of the project. Moulton and Donegan say the developers should be putting their own money into the project — not taking money out.

The state wants to know why Quiros and Stenger have not shown they are making contributions of their own money in the project as stated in an agreement with investors.

In her response dated March 25, Donegan asks Stenger to cite language in the private placement memorandum — the investor agreement — disclosing use of investor funds for pre-opening, marketing and developer fees.