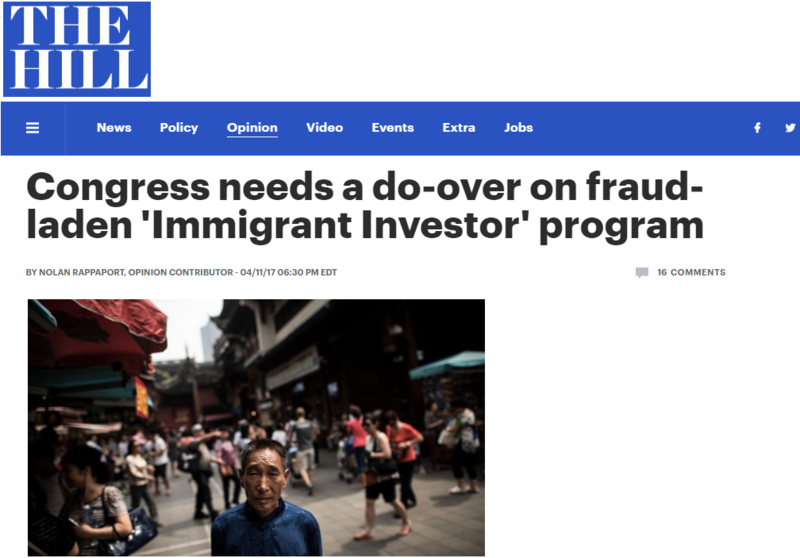 From California to Vermont, fraud is part of the EB-5 Immigrant Investor Program (EB-5 program), established by Congress in 1990.

The program offers lawful permanent resident status to foreign investors and their families to encourage them to invest in new businesses here that will benefit our economy and create jobs for American workers — but the program is rife with complications.

Has EB-5 achieved its objectives?

House Judiciary Committee Chairman Bob Goodlatte (R-Va.) observed at a recent March hearing on the EB-5 program that it is “riddled with fraud and abuse and has strayed away from the program Congress envisioned when it created the program decades ago.” The program “is in desperate need of reform.”

The EB-5 program requires a $1 million investment in a new business that will create at least 10 full-time positions for American workers. The amount is reduced to $500,000 if the business is established in a Targeted Employment Area (TEA), which is defined as “an area that, at the time of investment, is a rural area or an area which has experienced unemployment of at least 150 percent of the national average rate.”

Investors are also able to pool their investments with others to facilitate the development of larger projects.

Many other investors from mainland China are waiting for EB-5 visa availability. As of Nov. 1, 2016, there were 22,910 of them on the waiting list for EB-5 visas. This was 93 percent of the people on the list.

Circumventing laws from the get-go

Chinese EB-5 investors have to take $500,000 or $1,000,000 out of China to satisfy the EB-5 program investment requirements, but the government of China has imposed a $50,000 per year restriction, per individual, on taking money out of China.

It is possible to get approval from China’s State Administration of Foreign Exchange to take more than $50,000 out of China, but it is difficult and requires assistance from a skilled Chinese attorney. Such a discrepancy between what the EB-5 program requires and what the Chinese government allows means investors who do not have approval must find a way to circumvent the restriction. Such a willingness to circumvent the law is hardly a desirable trait in a businessman.

According to the House Judiciary Committee ranking member, Rep. John Conyers (D-Mich.), the result of this gerrymandering is that, “the vast majority of EB-5 investment funds are going to projects in some of America’s wealthiest corridors.”

A study conducted by the NYU Stern School of Business found than more than 99 percent of the EB-5 projects qualify as Targeted Employment Areas. “As evidence that virtually any location in the U.S. may constitute a TEA, even the Beverly Hills Waldorf Astoria, located in Beverly Hills 90210, qualifies.”

This situation may be due in part to the fact that state governments designate the high unemployment areas, and they are subject to pressure from local special interest groups.

Sen. Chuck Grassley (R-Iowa) testified at the EB-5 hearing that the minimum investment level has not been increased in 25 years. Investment funds are not vetted adequately, and foreign governments are not prohibited from owning or operating the regional centers. Also, background checks are not performed on the people associated with regional centers.

Fraud also has been a problem, as in the California case.

So, should the EB-5 program be terminated?

Yes, Congress has had more than 25 years to fix the EB-5 program. There is not going to be a legislative “fix.” The only viable alternative is to terminate it and start over.

I have a few suggestions for the new investment program. It should:

Some lawmakers have given up already. Rep. Steve King (R-Iowa) and Sen. Dianne Feinstein (D-Calif.) introduced bills to terminate the EB-5 program. These members have the right idea. It is time to put an end to a failing, faulty program and implement immigration policies that actually yield the intended result.