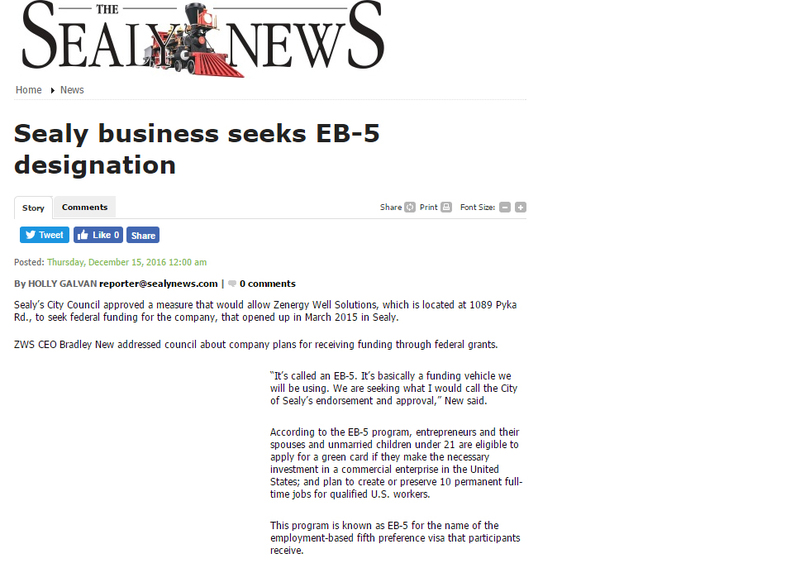 Sealy’s City Council approved a measure that would allow Zenergy Well Solutions, which is located at 1089 Pyka Rd., to seek federal funding for the company, that opened up in March 2015 in Sealy.

“It’s called an EB-5. It’s basically a funding vehicle we will be using. We are seeking what I would call the City of Sealy’s endorsement and approval,” New said.

According to the EB-5 program, entrepreneurs and their spouses and unmarried children under 21 are eligible to apply for a green card if they make the necessary investment in a commercial enterprise in the United States; and plan to create or preserve 10 permanent full-time jobs for qualified U.S. workers.

This program is known as EB-5 for the name of the employment-based fifth preference visa that participants receive.

According to the Department of Homeland website, Congress created the EB-5 Program in 1990 to stimulate the U.S. economy through job creation and capital investment by foreign investors. In 1992, Congress created the Immigrant Investor Program, also known as the Regional Center Program. This sets aside EB-5 visas for participants who invest in commercial enterprises associated with regional centers approved by United States Citizenship and Immigration Services (USCIS) based on proposals for promoting economic growth.

“Of course fraud is the first thing that you will hear about any program,” said Kim Melonec, Executive Director of Sealy Economic Development Corporation. “As we are all aware there is good and bad about many programs. The percentage of bad for this program is probably not any different than any other industry.”

Melonec spoke to council regarding the EB-5 program.

“There have been many successes. However, I would like to reiterate tonight that we are not here to endorse the program or even the company’s project. The targeted unemployment area letter only speaks to the unemployment of the area noted in the analysis, which includes the location of the business on Pyka road,” Melonec said.

For an area to be designated as a TEA, the EB-5 project must be located in either a rural area or in a location that has high unemployment.

The analysis council received is from impact data scores produced by an Austin firm that has been in business since 1993.
“In my experience this firm has been very credible and produces reliable and outstanding work, and is well known for their economic development,” Melonec said.

“We understand fully that this council needs additional information to be educated on the EB-5 program. You have heard from the company and their plans for expanding,” Melonec said.

“The city’s letter is just one of the many documents included in the overall package that will go to the (USCIS) for careful review and the final say,” she said.

Melonec explained that this is a way to bring jobs to the Sealy area.

“I ask that you consider this resolution tonight to allow this existing business, located in our city limits, to utilize an economic development tool available in this state and others for gap financing to expand and grow their business,” Melonec said.

Sealy City Manager Larry Kuciemba said he feels that this is an economic tool that should be used by the city.

“I feel very strong for endorsing the signature on the letter [that would] establish this TEA area so this company can grow. This is a mechanism of economic development and this company is able to qualify for that,” Kuciemba.

Councilmember Janice Whitehead questioned where the people hired would come from.

“You said there would be 25 to 30 jobs. Would there be local jobs? Since this does have to do with an immigration program, would you be bringing in immigrants?” Whitehead said.

New explained that the immigration program is only for the investor.

“There is a visa program attached to a bunch of guidelines. We will have a federal mandate to hire a certain number of employees and to very diligently tract where we spend that money,” New said. “The initial investment will provide some local jobs but they are not all local to the city because some are going to be coming from the surrounding cities.”

All other council members were asked if they had any additional questions or comments.

“I think that it’s an opportunity that we should take advantage of, to grow the economic devolvement of the city,” said Councilmember Jennifer Sullivan.

Sullivan made a motion with a second by Koy. The vote passed 4-2 with the two nays being Whitehead and Vrablec. Mayor Mark Stolarski was not present at the meeting.