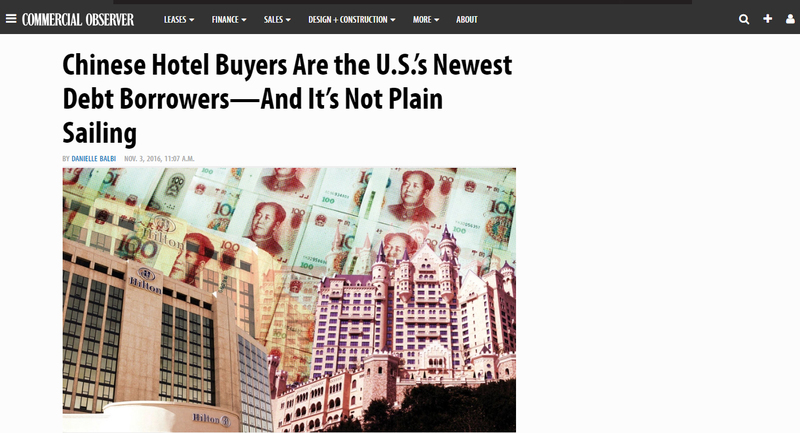 CHINA CALLING: CHINESE INVESTORS, WHO HAVE BEEN POURING MONEY INTO U.S. COMMERCIAL REAL ESTATE AS NEVER BEFORE, NOW COMPRISE THE NEWEST SUBSET OF HOTEL BORROWERS IN THE U.S.

The entrance of Chinese capital into U.S. real estate isn’t new. But it’s certainly evolving—as the last month alone has made even more players apparent with China Life’s purchase of a $2 billion stake in Starwood Capital Group’s U.S. hotel portfolio and the announcement that Chinese aviation insurer HNA Group would be snatching up roughly one quarter of Hilton Worldwide Holdings from Blackstone Group for $6.5 billion. And both these deals come on the heels of Anbang Insurance Group (the buyers of the Waldorf Astoria New York for $1.95 billion in 2014) closing its $6.5 billion buy of Strategic Hotels & Resorts from Blackstone.

“We have not seen any kind of diminishing investment appetite out of Asia,” said Jared Kelso, a managing director in Cushman & Wakefield’s hospitality group. “In fact, I think it’s increasing and this really is just the tip of iceberg. I think it’s going to continue coming and I think the investors that we’re seeing are increasingly more knowledgeable and savvy and that’s why you’re seeing people like HNA [Group buy a 25 percent stake in Hilton].”

While Chinese investment into the U.S. economy is certainly not exclusive to hospitality—Asian investment on the whole soared to $47 billion in 2015 from $4.3 billion in 2009, according to CBRE—this year so far, Chinese investors account for 76 percent of overseas capital invested in U.S. hotels, which is already more than double the 32 percent last year. Year-to-date, Chinese investors have deployed $7.7 billion of capital into U.S. hotels, eclipsing the $2.5 billion they invested at the same point 2015, according to data from JLL.

“Generally, Chinese commercial real estate investors are very comfortable with hotels,” Jerome Sanzo, the head of real estate finance at Industrial and Commercial Bank of China, told Commercial Observer. “They’re probably more comfortable with hotels than many other property types or other segments of the market. We think there will continue to be a lot of interest from large Chinese commercial real estate investors in U.S. hotels, particularly in high-quality, select-service or limited-service hospitality, especially if those properties are in key gateway markets such as New York, Los Angeles and San Francisco.” 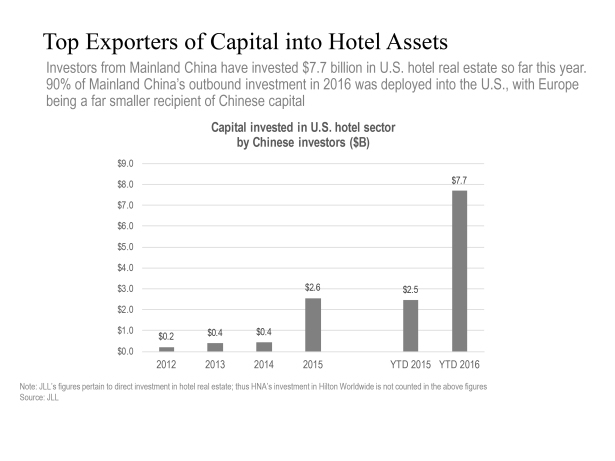 MONEY TALKS: Investors from Mainland China have invested $7.7 billion in U.S. hotel real estate so far this year, and 90 percent of China’s outbound investment in 2016 was deployed into the U.S., with Europe being a far smaller recipient of Chinese capital.

With that expected continuation of offshore investment, U.S.-based lenders are faced with an entirely new subset of borrowers. And while the Chinese have shown significant interest in investing in the Hiltons, Starwoods and Radisson Hotels, their ability to take out cash to fund those buys or fund new hotel developments isn’t always a walk in the park.

“It’s very difficult for an Asian company, particularly a Chinese company, to get standalone financing,” said a lender who spoke on the condition of anonymity. “The lender will look for a solid, well-capitalized U.S. partner who will handle the financing arrangements, especially for ground-up developments.”

Part of the challenge associated with lending to a new entrant into the U.S. market is determining a borrower’s creditworthiness, whether an individual or a large company.

“All banks have stronger KYC [know your customer] requirements, where you have to go back and get information about where the equity is coming from,” the source said. “You can do it with certain Chinese names, especially large state-owned enterprises or large, publicly traded companies, but for a lot of the other ones it’s very difficult to get the appropriate information.”

In some cases, a foreign borrower will bring in a U.S. partner on a deal. Kevin Davis, an executive vice president in JLL’s hotels and hospitality group, referenced a deal he is currently working on, where “Asian capital has been identified to recapitalize a portfolio of full and selective-service hotels.”

The deal will likely be funded by a U.S. group he said, and the financing can be brought in several ways. “There can be a recapitalization where the U.S. partner [the seller] stays in, and because the U.S. partner may have U.S. banking relationships, those loans can be financed through U.S. lenders,” he said. The execution of that deal would be straightforward and carry a leverage of anywhere from 60 to 70 percent.

If the Asian buyer were to purchase the portfolio of hospitality assets outright (without a U.S.-based partner), Davis said that depending on the cash flow of the underlying properties, the borrower could bring in debt from either a U.S. lender or a foreign lender—it just comes down to the cost of capital and leverage.

Davis also noted that U.S. lenders will provide slightly lower leveraged loans to those new borrowers as a means to adjust for perceived risks. In other cases, foreign investors will use their own equity to buy into a deal and bring in debt at a later date, he added. 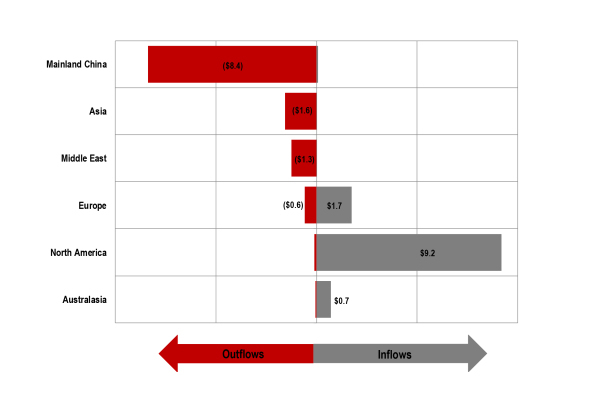 Year-to-date, China dominates the outbound market when it comes to hotel transactions. The U.S. is largest market for inbound capital, driven by Anbang’s purchase of Strategic Hotels & Resorts, and Europe is no longer attracting largest share.

When transacting alone, another obstacle that Chinese borrowers run into comes during the structuring of a mortgage. U.S. banks are unlikely to take guarantees, even nonrecourse carveout guarantees, because they may not be familiar enough with a company, the anonymous source told CO. Those banks are also concerned with whether or not a Chinese company will be able to get a deal approved and the money out of China in a timely manner.

However, those types of concerns are not exclusive to the new class of Chinese borrowers. “That’s frequently true in a lot of cases,” said Heidi Learner, the chief economist at Savills Studley. “You may have an investor or consortium of investors express interest, and then at the last minute someone changes the terms of the deal or someone gets cold feet and the deal falls apart. It’s a risk associated with any sale or transaction.”

Additionally, there are plenty of capital sources outside of U.S.-based banks and funds, especially if a borrower has been active in other markets.

“It’s more about your banking relationships,” Kelso said. “You don’t necessarily need a US partner to borrow money here. Plenty of investors have international banking relationships that are comfortable following their clients to the US, like HSBC or Bank of East Asia.”

Hotel development is a different story, in part because banks face constrained capital as a result of the High Volatility Commercial Real Estate rule, which drives up the cost of capital for acquisition, development and construction financing regardless of who the borrower is.

Sanzo of ICBC said that while the bank is open to new hotel financing, they are generally cautious when it comes to those types of development loans.

“If it’s a redevelopment deal, or ground-up deal, it’s really important that the foreign borrower has a strong U.S. development partner that can ultimately provide the bank with confidence in that they have the expertise to complete a conversion or get a deal constructed,” Davis said. “If you have a site in New York City and are planning a 400-key hotel, you need a developer who has actually developed in New York and has a reputation in New York.”

It’s not just massive corporate entities that love U.S. hotels. EB-5 money—which comes from the immigration program that allows foreigners to invest in U.S. development projects in exchange for a greencard—has been pouring into the U.S., primarily from China, and hotel development projects just make sense with their requirements for the program.

Jill Hamer, a registered representative of the EB-5 group at NMS Capital, said that hotel developments are particularly attractive to EB-5 investors because, given a construction period is longer than 24 months, the investor can meet or exceed the requirement of creating 10 new jobs.

“There are three types of EB-5 job creation: direct, indirect and induced,” she explained. “Direct jobs are jobs actually created by the project, for example, a maid who works in a hotel. Indirect jobs are created as a result of increased activity near a project, like the wait staff at a nearby restaurant. Induced jobs are created by the increased spending due to the creation of direct and indirect jobs, like a cashier at a local supermarket.”

Whether big or small, these Chinese investors are here to stay and will soon blend into the U.S. commercial real estate borrower landscape. The catalyst might not boil down to one particular issue, but some who have worked with Chinese investors say general buying has two causes: economic imperialism and escapism.

“The Chinese government in general has a policy of financial imperialism,” said Robert “Toshi” Chan, the partial owner of the Flatiron Hotel. “They want to use their money and tell their people to go buy all. Say it in Chinese: Go out and buy. That’s a form of imperialism, not with guns but with your money.”

The other reason, he said, is because those in power, like politicians, are fearful of retribution. “Corruption is so rife in China, so they’re going after everyone right now,” he said. “They set up what I call a Gestapo line. They started very small, going after one person. They set up a line where people can call to give tips to rat on this one person. “Do you have any idea? We’re putting this person on trial.”

But outside the political fears from within the country, the U.S. market just makes sense, whether hotels or not.

“Part of the reason the Chinese have looked to invest overseas is because of their concerns of a further yuan devaluation,” Learner said. If the yuan were to depreciate, investments like HNA’s buy into Hilton, or Anbang’s buy of the Waldorf, would result “in a real return for them just on a currency basis.”

It’s also a diversification play. Gilda Perez-Alvarado, a managing director at JLL’s hotels group, spent the last three weeks in Asia and pointed to Chinese investors’ interest in not only commercial real estate but also technology, health care and other sectors. “We’re not really dealing with hotel-specific investors,” she said. “These are general investors who are looking to balance their port by adding lodging properties.”