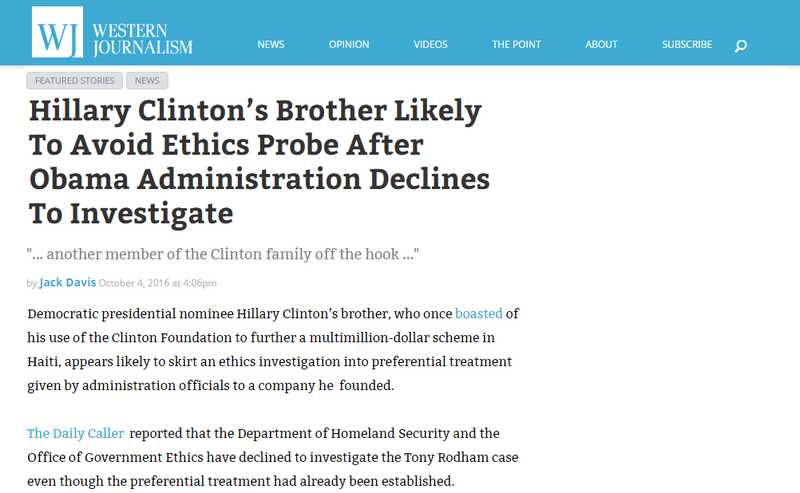 Democratic presidential nominee Hillary Clinton’s brother, who once boasted of his use of the Clinton Foundation to further a multimillion-dollar scheme in Haiti, appears likely to skirt an ethics investigation into preferential treatment given by administration officials to a company he founded.

The Daily Caller reported that the Department of Homeland Security and the Office of Government Ethics have declined to investigate the Tony Rodham case even though the preferential treatment had already been established.

Mayorkas oversaw a program called EB-5, which offered a fast track to a green card for foreign investors who put $500,000 into a job-creating American business. The program’s popularity exploded under his stewardship.

He drew the wrath of the inspector general for fast-tracking visa applications for a company called GreenTech Automotive, run by Rodham and former Virginia Gov. Terry McAullife.

However, despite the findings of the inspector general, nothing happened.

When the Immigration Reform Law Institute, a watchdog group, sought to learn about the investigation through a Freedom of Information request, the group was told there was never any recommendation made to go further with the case.

The news disgusted one commentator.

“Now, the government is letting another member of the Clinton family off the hook,” wrote Andrew Mark Miller on Young Conservatives. “This time it’s Hillary’s brother along with the incredibly corrupt Terry McAuliffe who is a good friend of the Clintons.”

Miller summed up the incident: “More of the same.”

“This is exactly what the American people are tired of. You have to imagine that this story will only add to the growing disapproval with government that has fueled the Trump campaign for about a year,” he wrote.

“Politics over everything. That’s how President Obama and Hillary Clinton operate,” he added.

Despite the lack of action, the report had been clear about Mayorkas’ activities.

The 2015 report said investigators had interviewed 15 whistleblowers when it investigated Mayorkas.

“Each conveyed the same factual scenario,” the report said. “Certain applicants and stakeholders received preferential access to DHS leadership and preferential treatment in either the handling of their application or petition or regarding the merits of the application or petition. … Many witnesses provided emails, written contemporaneously with the events, to support their allegations of special access and treatment.”

The case of Clinton’s brother was one special case Mayorkas handled.

When it appeared Rodham’s venture was not going to be funded, “Mr. Mayorkas told his staff that he wanted to review the decision. … Many EB-5 officials found this highly unusual because past USCIS Directors typically had not scrutinized individual decisions; they found this level of scrutiny unsettling,” the report said.

Mayorkas even vowed to write the report on his own, outside the office, the report said.

“One meeting participant said that ‘everyone froze’ when Mr. Mayorkas said, ‘Let me take it home and rewrite the report,’” the report said. “The participant was ‘stunned’ by Mr. Mayorkas’ suggestion, saying ‘the entire turn of events made me extremely uncomfortable.’ Another participant told us the request made it appear that Mr. Mayorkas was dictating the results, which ‘looked bad.’ Ultimately, the participants dissuaded Mr. Mayorkas from rewriting the decision himself.”