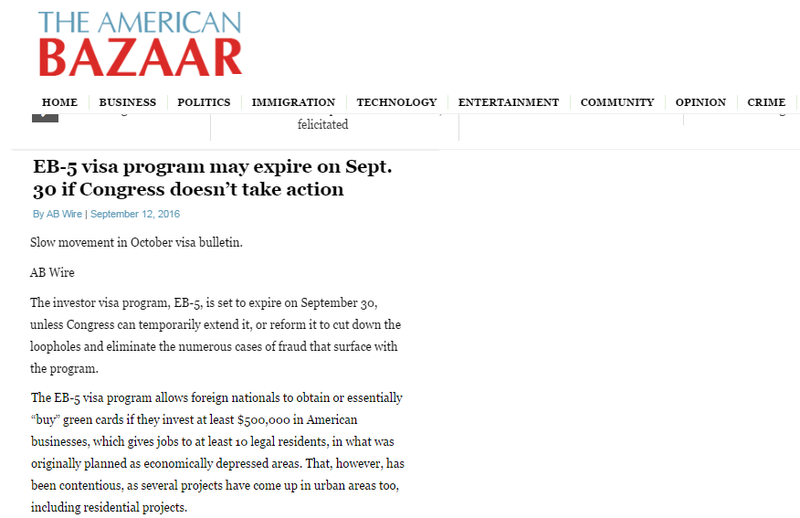 The investor visa program, EB-5, is set to expire on September 30, unless Congress can temporarily extend it, or reform it to cut down the loopholes and eliminate the numerous cases of fraud that surface with the program.

The EB-5 visa program allows foreign nationals to obtain or essentially “buy” green cards if they invest at least $500,000 in American businesses, which gives jobs to at least 10 legal residents, in what was originally planned as economically depressed areas. That, however, has been contentious, as several projects have come up in urban areas too, including residential projects.

A 9-month extension for the program was included in last year’s omnibus spending bill with no changes to the program even though there was bipartisan support to end the program after a GAO report revealed that the visa was vulnerable to fraud, reported NumbersUSA.

After this report was released Sen. Dianne Feinstein (D-Calif.) wrote an op-ed that called for an end of the program saying, “simply put, EB-5 sends a terrible message to the millions of immigrants patiently waiting their turn to enter the United States legally…It says that American citizenship is for sale, and that’s not what our country stands for.”

This bill was struck down by opposition from Sens. Chuck Schumer (D-N.Y.), John Cornyn (R-Texas), and Jeff Flake (R-Ariz.) who want to grandfather in current EB-5 applications from these anti-fraud requirements and keep the EB-5 investment money toward urban areas, reported Numbers USA.

Sen. Chuck Grassley (R-Iowa) said that the involvement of “the EB5 Investment Coalition, the Chamber of Commerce, and the Real Estate Roundtable — with their force in the backrooms of the Congress, kept us from getting the legislation passed.”

The New York Times reported the EB=5 visa program has been marred by fraud and used to build large projects in wealthier areas like Manhattan and the Las Vegas Strip instead of high-unemployment or rural areas.

Federal investigators have also discovered that attempts to infiltrate the program were made by people with possible ties to Chinese and Iranian intelligence, and that international fugitives who laundered money in their home countries gained citizenship through the program.

More recently, federal prosecutors in April charged two Vermont developers, Ariel Quiros and William Stenger, with defrauding investors from at least 74 countries. Federal and state officials said the two raised $350 million through the EB-5 program for an array of projects including a ski resort.

According to a 52-count civil complaint filed by the federal Securities and Exchange Commission and a 15-count complaint by Vermont, the developers engaged in a “massive eight-year fraudulent scheme” in which they “systematically looted” millions of dollars from the foreign investors. Quiros was accused of using $50 million for personal expenses including a luxury condominium at Trump Place in New York.

Stenger announced in a statement this month that he had reached a settlement with the federal government. The case against Quiros is pending, reported Times.

Also, the expected movement in visa priority dates did not materialize for the EB-5 visa category, as the new October bulletin reveals.

The date for final action for the EB-5 visa category for mainland China-born applicants advanced only one week from Feb. 15, 2014, in September, to Feb. 22, 2014. Furthermore, the filing date chart retrogressed by over a year, retreating from May 2015 in September to June 2014 in October.