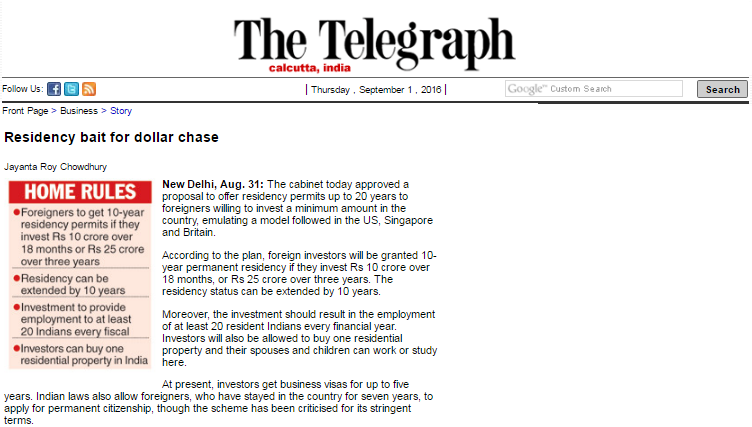 The cabinet today approved a proposal to offer residency permits up to 20 years to foreigners willing to invest a minimum amount in the country, emulating a model followed in the US, Singapore and Britain.

According to the plan, foreign investors will be granted 10-year permanent residency if they invest Rs 10 crore over 18 months, or Rs 25 crore over three years. The residency status can be extended by 10 years.

Moreover, the investment should result in the employment of at least 20 resident Indians every financial year. Investors will also be allowed to buy one residential property and their spouses and children can work or study here.

At present, investors get business visas for up to five years. Indian laws also allow foreigners, who have stayed in the country for seven years, to apply for permanent citizenship, though the scheme has been criticised for its stringent terms.

Finance ministry officials said the "residency for investment" scheme was similar to a US visa programme - EB-5 - which asked immigrants to invest between half-a-million dollars and $1 million in businesses that create at least 10 full-time jobs.

"The only difference is that we have not brought in the US concept of targeted employment area where investments under EB-5 are routed to zones where unemployment is high, such as the former automobile city of Detroit," said officials.

However, Britain is reworking the scheme as much of the investment under this rule is by Russian and Chinese oligarchs in the unproductive real estates of London. The British visa programme grants residency depending on the investment, which could be in the range of £1-£10 million.

Merchant bankers said the scheme would attract investors from neighbouring Asian countries caught in political or security risks, including Bangladesh, Myanmar, Afghanistan as well as central Asian nations such as Iran, Iraq and Turkmenistan.

"These are the obvious candidates. I would also rule in Indian-origin investors from Hong Kong and Fiji who have not yet got Australian or Canadian citizenship. Rich Indians settled in east Africa may opt for this visa programme," said Amit Banerjee, a merchant banker specialising in Asian funds.

Foreign direct investment into India climbed 23 per cent to $55 billion in the 12 months ended March 2016.