Can $250 million and a Ferris wheel finally turn the Queen Mary into a Long Beach tourist destination? 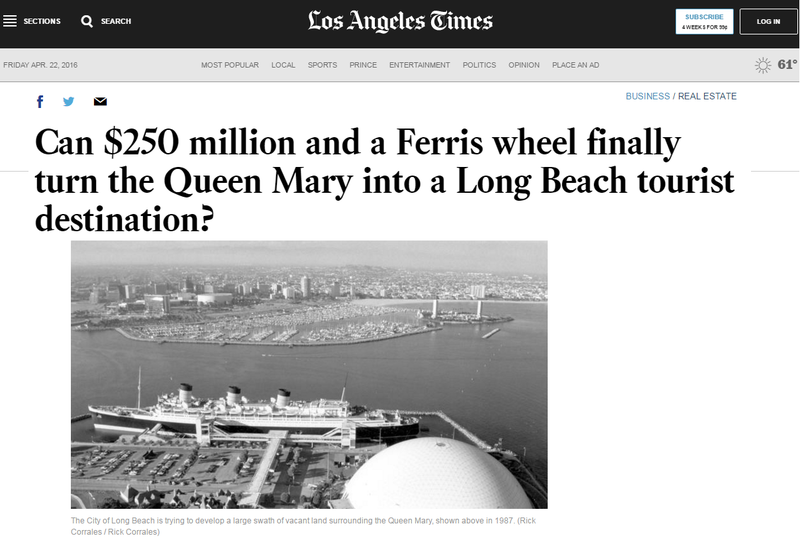 When one of the most famous ocean liners in the world sailed into Long Beach in 1967, city boosters figured they were well on their way to creating a must-see tourist destination.

But in the decades since, proposals to build attractions that would complement the Queen Mary — from a Disney marine park to a science fiction museum — have been trumpeted, only to fade away.

Now, the city is trying once again to develop a large swath of vacant land surrounding the historic vessel turned hotel, and it's banking on a relatively unknown L.A. real estate company with a big plan: a $250-million entertainment and retail complex that might even feature a giant Ferris wheel.

"The idea is to do something spectacular on the water that will also connect to downtown," Mayor Robert Garcia said.

The company, Urban Commons, was chosen by the city late last year as the new leaseholder of the marine complex. The company formally took over the lease this week and is working with a task force appointed by the mayor on ideas for developing the surrounding 45 acres, now mostly parking lots.

While plans are still preliminary, company principal Taylor Woods said he would like to add to the 314 staterooms available on the ship. He envisions a 200-room landside boutique hotel, restaurants, a marina and an amphitheater for thousands to enjoy live music and events — all linked together by jogging and bike paths near the water.

Woods said a giant Ferris wheel is also a possibility, as long as it wouldn't detract from the Long Beach skyline.

Such attractions have become increasingly popular in recent years since the 443-foot high London Eye opened along the Thames in 2000. Others built since then include a 550-foot wheel in Las Vegas.

"This is a tremendous opportunity to transform a beloved Southern California icon into a beloved world-class destination," Woods said.

Garcia said the amphitheater, marina and hotel are ideas that have been discussed as possible, but he emphasized that nothing has been finalized.

The question is whether Urban Commons can deliver where other companies have failed.

Even Howard Hughes' massive Spruce Goose wooden airplane, which went on display in 1982 in a giant dome next to the ship, was taken apart and shipped to an Oregon museum in 1993. The dome is now used as a terminal for Carnival Cruise Line.

But the Burbank entertainment giant declined to renew its lease in the early 1990s and instead built the California Adventure amusement park next to Disneyland.

In 1995, Queen's Seaport Development Inc., formed by businessman Joseph F. Prevratil, took over the lease and floated various plans over the years, including a science fiction museum and time-share condominiums. But in 2005, Queen's Seaport filed for bankruptcy.

Urban Commons took over the lease from Garrison Investment Group, a New York company that had held the lease since 2009. It is working out final terms with the city on a new 66-year lease of its own.

Michael Conway, the city's director of economic and property development, said one reason past plans were stymied was the lease didn't allow for the land to be subdivided, preventing developers from getting financing to build individual projects.

"This will change in the new lease," he said in an email.

Woods said Urban Commons has been holding substantive meetings with city officials and the Queen Mary Land Development Task Force and hopes to have a master plan for the city's approval within a year. He hopes the whole development will be finished within five years.

Urban Commons, based in downtown Los Angeles, has a portfolio that includes a nearly 800 room hotel near Walt Disney World, along with hotels in Denver, Pasadena and Miami, according to the company.

The firm also said it broke ground on a new hotel project in Grover Beach along the Central Coast in November and has other "projects currently under development, including hotels, apartment buildings and mixed-use properties."

Its hotel near Walt Disney World is named Nickelodeon Suites Resort, but in June the resort will stop featuring Nickelodeon branding and entertainment offerings.

In a statement, Nickelodeon said it and Urban Commons "have mutually agreed to not extend the partnership," while "Nickelodeon will continue to broaden its recreation portfolio by partnering with leading hospitality companies around the globe."

Bruce Baltin, a hospitality consultant with PKF Consulting, said he wasn't very familiar with Urban Commons, other than they've been busy. "They have been pretty aggressive," he said.

Although previous leaseholder Garrison did not undertake any major development, the company started a series of events to attract more visitors to the complex, including a Halloween festival, dubbed Dark Harbor, that drew tens of thousands of people last year.

Woods said he would like to expand events and further renovate the ship, which also features restaurants and several ornate ballrooms that host weddings and conferences. Garrison spent some $13 million improving the ship.

"The entire property should be enhanced with a greater touch of luxury," Woods said, noting the staterooms should have more of a "spa" feel and the original woodwork should be restored.

Garrison had hired Evolution Hospitality, a Newport Beach firm, in 2011 to run the ship. Urban Commons plans to retain Evolution as the operator.

Built in 1934, the Queen Mary was billed as the fastest and most luxurious cruise ship in the word — the Duke and Duchess of Windsor, as well as Elizabeth Taylor, took to the high seas on the liner.

During World War II, the ship transported soldiers to the European front, earning it the name the Gray Ghost. The city of Long Beach bought the ship in 1967 from the Cunard Line shipping company.

Woods said Urban Commons will spend $10 million to $15 million to renovate the Queen Mary and an additional $250 million to develop the surrounding land, money the company plans to raise.

One possible financing avenue is through the federal Eb-5 visa program, which allows foreign investors to gain permanent U.S. residency in exchange for investments that create American jobs.

Urban Commons is approved to raise and use funds through the program, though a company spokesperson said the Queen Mary project "does not include that component at this time."

While many details remain to be worked out, Garcia called the deal with Urban Commons the most promising one he's seen.

"This is farther than we've come in many years," he said.