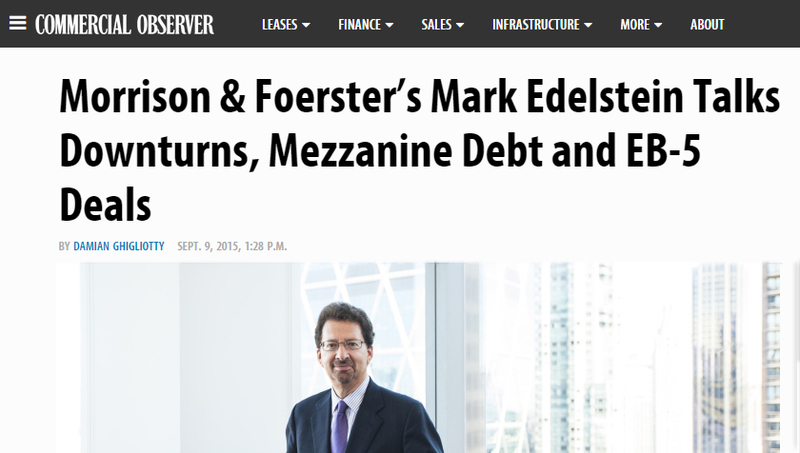 Mark Edelstein, partner and chair of the real estate finance and distressed real estate practices at Morrison & Foerster, has been with the global law firm since 1999. Based out of the firm’s New York office at 250 West 55th Street, Mr. Edelstein oversees a team of more than 80 attorneys and represents some the world’s biggest lenders and developers. The New York native, who was born in Manhattan and raised in the Bronx, has worked on several high-profile transactions within the past year. He represented Hines and Goldman Sachs in the $860 million construction financing for their joint venture MoMa Tower at 53 West 53rd Street and Bank of New York Mellon and Wells Fargo in their $411.5 million construction loan for the Durst Organization’s rental tower at 625 West 57th Street. Since the last downturn, Mr. Edelstein has also played a key role in several major restructurings and bankruptcies, including Extended Stay Hotels’ $8 billion bankruptcy in 2009 and General Growth Properties’ $27 billion bankruptcy in 2010.

In the 1990s you handled restructurings and workouts for the lenders to Leona and Harry Helmsley and Donald Trump, among others. What did you learn from working on the less glamorous side of the commercial real estate business?

Mr. Edelstein: Around 1989, I saw that the market was likely going to tank and so I went to the workout and bankruptcy guys at my old firm and said, “I think we should prepare because there’s going to be a wave of bankruptcies and distressed real estate deals.” We created a distressed group that year, and then in 1990 the real estate market came to a halt and we had five or six years of workouts, involving folks like Harry Macklowe, Alvin Dworman and Olympia & York. By the mid-’90s, the market came back and I returned to the real estate practice.

My personal view was colored by that experience and it dawned on me that you could actually have a countercyclical real estate department at a law firm, which makes us somewhat unusual. There are some practices that are innately cyclical, such as mergers and acquisitions, capital markets and construction. So the question for me was how do you work in a business that always has its ups and downs and always stay busy? When the last recession hit in 2008, we had been gearing up for that and as soon as we hit the bottom, we went out after the biggest workouts in the country. We got hired on General Growth, representing the largest creditor in that case, which was the largest real estate failure of the downturn.

What are some of the other litigations you worked on during that time?

We took one case up to the U.S. Supreme Court and got a unanimous verdict for a very important principal. We worked on another case involving a $500 million land loan, which sounds crazy, outside of the Vegas Strip in Nevada at a time when land wasn’t going for 2 cents on the dollar. We got paid in full after four and a half years of litigation. We did an involuntary filing for J.P. Morgan, Wells Fargo and Crédit Agricole—the first time in the history of J.P. Morgan and Wells Fargo that they had filed an involuntary bankruptcy against a developer.

Over the course of that time we kept people very busy and never laid anyone off in our group during the recession. The better players in the market, including the best lenders, equity investors and developers, have gone through at least one cycle. When you’ve survived a downturn, you know what can go wrong when the market is healthy. Of course, I’d rather stay on the healthy side of the business if I had the choice.

On that note, you’ve also represented lenders on some of the biggest deals since the beginning of the recovery. Which of those stand out as the biggest accomplishments?

Two of the tougher deals we worked on were the $525 million financing led by J.P. Morgan for the conversion of St. Vincent’s Hospital and the $700 million construction financing led by Bank of America for Extell’s One57 tower. Not that they weren’t great projects, but their timing was early since they came right after the market started to bottom out. Lenders are risk adverse by nature and the words “construction loan” hadn’t been uttered for some time. “Condominium” was another word not often used, so to do condo construction was a very hard thing during the downturn.

Both of those deals were complete homeruns for the developers and the banks, but at the time, no one knew how long it would take for the market to correct. The construction loan on One57 was fully paid back in the past 12 months.

There’s been a lot of positive real estate news in recent years, but we’ve also seen several lawsuits in 2015, many of them involving mezzanine lenders. Have you had the pleasure of working on any of those?

We haven’t worked on as much of what I call tranche warfare as we did during the last downturn, but now we’re moving back into territory that is starting to remind me of the pre-2007 period. After the downturn, S&P and Moody’s basically announced that we should never go back to the days where we had 10 tiers of mezzanine debt. Extended Stay is a good example of that. We had more than 20 tiers of CMBS bonds and behind them 10 tiers of mezzanine debt as well as several different layers of equity. Those structures are prone to lots of litigation when things go south.

We thought the structures would simplify, but now we’re looking at our most recent deals, and while they’re still underwritten on a healthy basis, we’re seeing those structures creep back. We do fear that if the structures get much more complicated, we’re going to ultimately see more litigation. Being lawyers, we’re nervous by definition. At the same time, the activity in the city is starting to raise a couple of eyebrows and we want to make sure that we’re not creating inventory for the next wave of workouts.

Are you worried for your clients?

Back in the ’90s, you saw a lot of cranes and they were all building office space. Today, you walk around the city and most of the cranes are building residential towers, many of them condos. The condo construction deals can be a little nerve-racking because it’s like musical chairs. At some point the music’s going to stop and someone’s going to get stuck with a partially built condominium, so you hope it’s never one of your clients.

There’s a lawsuit that was recently discontinued that involved a $22 million mezzanine loan on the Charles condo development at 1355 First Avenue. The dispute apparently arose from the mezzanine lender seeking to change the terms of the subordinate debt. Are cases like that common?

We were involved in that deal on the EB-5 side. I wouldn’t say that case is endemic of the market, but it does illustrate that there’s a big difference between the mezzanine lenders out there right now. There are big companies like MetLife, Vornado and SL Green that do mezzanine debt. But then a lot of the EB-5 deals that we see are done in a mezzanine format and a lot of the folks who run those deals are less experienced. The regional center on the Charles condo deal happens to be as experienced as they come, but they’re still new to the whole subordinate debt financing game. You might have lawsuits like that one due to the amount of new entrants into mezzanine debt.

I do think there will be more lawsuits with EB-5 deals as well. Probably not in New York as much, but a lot of the folks involved in those deals don’t have a background in real estate, so many of the projects that are financed through EB-5 might not have penciled out otherwise. And then, of course, every couple of weeks there’s another EB-5 fraud case.

Do you foresee any big changes in the EB-5 program after Sept. 30?

A year ago, we were telling clients that come now, August of 2015, the fundraising for EB-5 would come to a trickle, since, historically, that’s what happened. It’s actually been the complete reverse of what we expected, since Congress has made it clear that they’re going to extend the program. There’s a relatively finite amount of money that can go into EB-5 deals, about a few billion dollars a year, and yet the desire for EB-5 funds in New York projects continues to skyrocket.

What’s actually happening right now is that there is an avalanche of filings in Washington from developers looking to have their projects approved. That’s because immigration lawyers are advising them that if they want to grandfather themselves under the current program they better get their filings before the immigration services by Sept. 30. That’s taking up a bunch of our time [laughs].