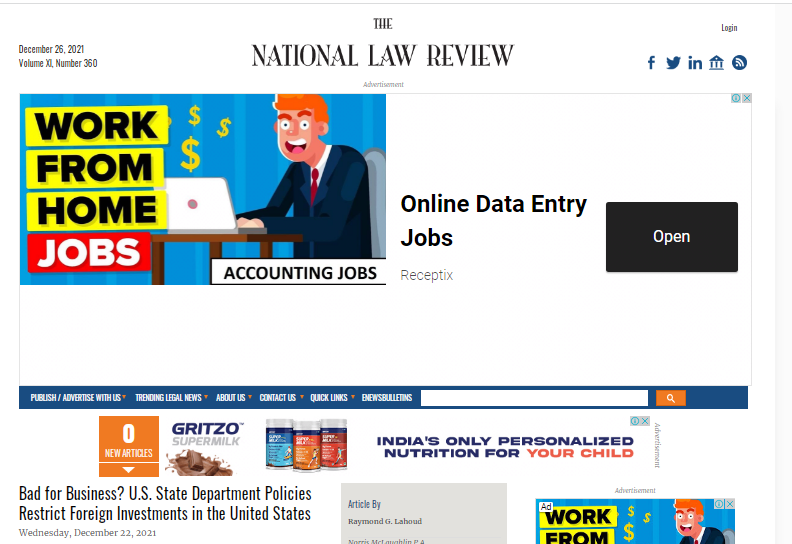 While the U.S. economy continues to grow, foreign investors are having increasing difficulty investing in businesses within the United States. Several U.S. consulates have restricted or outright suspended the adjudication of E-visa applications, contributing to a significant decline in foreign investments in U.S. businesses.

One category of E visas is the popular EB-5 visa (employment-based fifth preference), which affords foreign investors the ability to become lawful permanent residents of the United States if they invest substantial capital to finance a business here. These investments, which generally require between $500,000.00 and $1 million, serve to promote job creation in targeted regions in the United States. In fact, EB-5 visa investments are credited with providing the country much-needed capital during the Great Recession.

Decline in Foreign Investments
Despite the economic support they have provided the United States, foreign investments have been on the decline for the past several years. According to the U.S. Department of Commerce Bureau of Economic Analysis, foreign direct investment declined by 61% between 2018 and 2020, from $312 billion in 2018 to $221.2 billion in 2019 to $120.7 billion in 2020. Given such a precipitous decline in such a short time, it is necessary to determine what is fueling this trend.

Delays and Stoppages in E Visa Processing
These declines are likely caused by several factors, but one that cannot be ignored is the chilling effect caused by lengthy delays in the processing of E visas. EB-5 petitions, for instance, have one of the longest processing times, with current wait times of 44 to 77 months, and even longer for certain countries. The long waits continue despite recently announced guidance by the U.S. State Department easing the processing restrictions associated with the COVID-19 pandemic.
Unfortunately, it appears no immediate solution is in sight. At some U.S. consulates, including the U.S. consulate in Bogotá, Colombia, adjudication of E visas has completely ceased.

Ongoing Issues for Foreign Investors
A recent article by Forbes highlights the ongoing issues foreign investors are experiencing. Recent communications from the Bogotá consulate indicated they were unable to handle E visas at this time. The Istanbul consulate, citing the pandemic, said the same thing. These delays have rightfully frustrated foreign investors who are being forced to wait, sometimes for years, to start a business in the United States or invest here. The lengthy delays continue to block foreign investment in U.S. businesses across the board.

While this issue continues to be a problem for foreign investors, it is not without proposed solutions. The U.S. government has the option to advise U.S. consulates that they do not have the discretion to simply refuse to adjudicate visa applications, including E visas. By eliminating the discretionary aspect of visa processing, it is possible to kickstart the adjudication of the backlog of E visa petitions.

Until something changes, however, countless noncitizen investors will be forced to continue to wait.