Will The EB-5 Regional Center Program Ever Be Renewed? 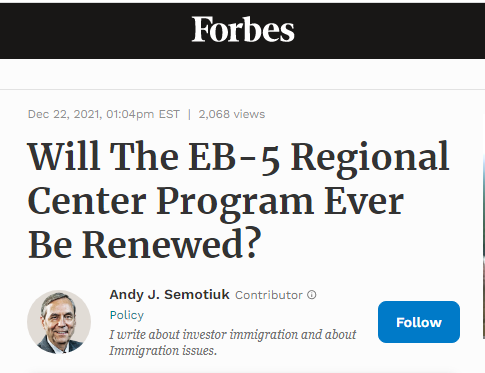 Let’s face it, things are not looking good for the re-authorization of the regional center EB-5 program any time soon. By way of background, the Immigrant Investor Regional Center Pilot Program program was created by Congress in 1993. The pilot program established EB-5 regional centers designated by the United States Citizenship and Immigration Services to increase foreign investment and job creation. The major advantage of the regional center designation was that it could take advantage of indirect job creation (such as counting offsite jobs linked to construction) and thereby lessen the burden of job creation requirements under the EB-5 program rules.

100,000 Foreign Investors In Limbo
At this moment it appears that the program, which lapsed on June 30th, 2021 and left almost 100,000 investor immigrants in limbo, will remain closed, likely at least until February 18th, 2022 at the earliest. On that date, Congress will face another financial deadline requiring the passage of a new Continuing Resolution to keep the federal government operating. The best supporters of the EB-5 regional center investor immigration program can hope for is to persuade Congress to reinsert the program, with or without minor variation, into the Congressional automatic budget renewal process - not an easy task. Alternatives like a stand-alone EB-5 bill, or some breakthrough involving EB-5 measures being incorporated into the Build Back Better, have all but evaporated as Democrats in the Senate have encountered setbacks and the Congressional schedule is increasingly jammed with other legislative priorities.

Time To Reconsider Strategy
It is time to reconsider strategy on the regional center EB-5 program. The priority now needs to be a rescue plan for those foreign investors whose petitions are stalled because of the sidelining of the program. As soon as possible, a bill like the Foreign Investor Fairness Protection Act should be passed by Congress to use grandfathering, a long established legal procedure that will likely meet with bipartisan support to set things right. Such a step would help all the foreign investors who acted in good faith under then existing law when they invested into a regional center project under the EB-5 program before the program sunset. There is no reason why such foreign investors should continue to be held hostage by Congressional delays in addressing the issue of what is to be done with the EB-5 program. Failing to act soon will only increase frustration, make enemies out of foreign investors caught up in the frey, probably spark a rash of law suits, and leave America’s image overseas tarnished by its incompetence at sorting out the problem.

Which Way Forward?
As for the way forward, it looks like the new standard bearer of U.S. foreign investor immigration is going to be the EB-5 direct investor program. That program seems increasingly more desirable in the eyes of both foreign investors and U.S. developers. There are several reasons why it is winning the favor of investors and developers alike. For one thing, the size of projects is smaller and the number of investors in each proposed project is reduced considerably so the projects seem more manageable. Furthermore, the arithmetic of job creation counts only direct employees and not with indirect jobs. That makes the projects under consideration seem better thought out and more conservative in terms of risk. Also, the most recent State Department Bulletin shows priority dates are current for investors worldwide. Finally, a key factor turbo-charging the success of the direct investor EB-5 program at the moment is that the required investment amount is only $ 500,000. It remains to be seen what will happen if that requirement is changed.

What Happened To Regional Centers?
Many of us were surprised when in June 2021, suddenly the regional center program was sidelined. It seemed almost impossible for the U.S. not to reauthorize the program in some way given the tremendous investments the program was bringing in every year, regardless of reservations people had. Covid-19 seemed to make processing grind almost to a halt adding a lot more stress for investors who were confused by what was happening. When the program lapsed the biggest questions centered on whether investors would still be able to get their green cards and what would happen to their investments given the new circumstances. Passing a grandfathering provision along the lines suggested above would at least deal with these concerns.

Gazing Into The Crystal Ball
Looking into a crystal ball, one can estimate that the chances of a re-authorization of the EB-5 regional center program declining with the passage of every day. However, one should never discount America. You just never know.