The LIKE Act: An Invitation To Invest In The US Tech Industry

The success of the EB-5 program has highlighted the world’s faith in the US economy and the fact that the US is one of the easiest and most accessible countries in the world for business. The US is a utopia for startups and tech companies, having the largest and most sophisticated economy in the world , in addition to  world-leading support ecosystem and massive venture capital ready to back promising businesses.  Historically, EB-5  projects that focus on technology have not been able to compete with real estate.  The LIKE Act leans towards entrepreneurial immigrants within the Tech industry, allowing another path to immigration through investment. A bill like this is well overdue!  It is not a replacement for EB-5 but can be seen to complement it.

On July 26, 2021, US Congresswoman Zoe Lofgren (D-CA), Chair of the House Subcommittee on Immigration and Citizenship, introduced the Let Immigrants Kickstart Employment (LIKE) Act (H.R. 4681). Similar to the Entrepreneur in Residence Program that was created by Obama, and subsequently cancelled by Trump, this is a nonimmigrant visa rather than an immigrant visa.

This bill encourages immigrant innovators to establish and develop venture capital-backed start-up companies in the United States to stimulate economic growth, create jobs in the US, and enhance the country’s competitive advantage on the world stage. If passed, the LIKE Act would create a new visa category – the W visa – allowing immigrant entrepreneurs to stay in the US for a period of three years. To qualify for this potential visa, one must:

W visa holders could receive additional extensions of their temporary status up to five years so long as they retain an ownership interest in the start-up entity and the entity meets certain growth-related conditions, such as job creation and revenue generation. Similar to the EB-5 Program, the LIKE Act can also be an alternative path to permanent residency. Founders can apply for lawful permanent residence if the start-up entity meets certain additional requirements that demonstrate the founder has a track record of success in business development.

The Rise of Start-Ups

Start-ups are fundamental to US job creation, generating an average of 3 million net new jobs annually. They create more than four times as many jobs than mature companies that have been operating for 11 or more years and are responsible for virtually all net new jobs created over the last couple of decades. Some of the US’ most successful companies – such as Moderna, Tesla, and eBay – are immigrant-founded start-ups. However, despite widespread evidence that highly skilled immigrants are crucial to the growth of the US economy, current immigration laws do not provide a viable visa option for such individuals to start a new venture. Presently, at least 25 countries have a version of a start-up visa, including Canada, the UK, Australia, Germany, and Sweden. Meanwhile, with US immigration policy pushing away entrepreneurs, the US share of global venture capital has fallen from 84% in 2004 to 52% in 2019.i

Similar to both the E-2 and EB-5 visas, the LIKE Act would allow immigrant investors to earn lawful status in the United States. However, there are some key differences between the three programs. 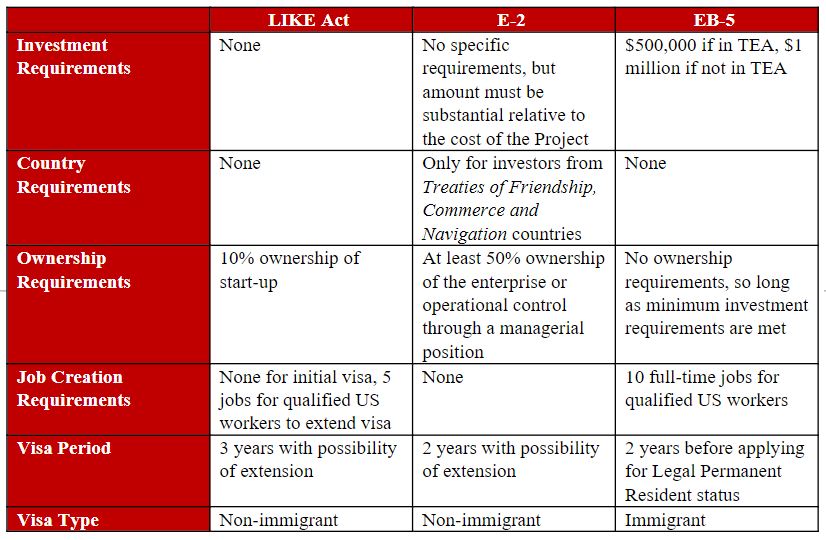 The LIKE Act has received support from a myriad of organizations, including: the National Venture Capital Association, Center for American Entrepreneurship, FWD.us, Engine, TechNet, New American Economy, the Economic Innovation Group, and the Federation of American Scientists.

However, despite its growing support, many remain cautiously optimistic about the bill’s passage as it remains in the early stages of the legislative process. The bill has yet to be co-signed by any additional members of Congress and faces a lengthy reviewal and voting process within the House Judiciary Committee before it can be passed to the House and Senate.

Representative Lofgren is hopeful that, if passed, the LIKE Act will bring more money, jobs, and entrepreneurial spirit to the US, while also giving immigrants the opportunity to pursue their innovative ideas. “We can make the United States more prosperous by passing bills like the LIKE Act that stimulate the economy, curb brain drain, create jobs for American workers, and restore our country’s standing as the number one choice for the next-generation of entrepreneurs worldwide.”

Mona Shah, Esq. U.K. born and a former British Crown Prosecutor, Mona has over 28 years of legal experience with extensive knowledge of all facets of U.S. immigration law. Recognized as one of the industry leaders in EB-5, tackling complex issues, Mona has received many accolades for her work, including being voted a top 25 EB-5 attorney in the U.S. seven years in a row; top Global Migration Lawyer (U-Global), Top lawyer by Who’s Who International; and Top attorney of North America. A part-time adjunct professor at Baruch College, Mona is also a published author, and Lexis Nexis Practice Editor. Mona regularly speaks worldwide and has been interviewed by mainstream news channels, including Fox Business News and Al Jazeera, and quoted in major newspapers, including the New York Times, Bloomberg and Axios. Mona hosts and produces Global Investment Voice Podcast series (145+ episodes). MSA have worked with the top echelon within the industry and have been instrumental in the success of numerous projects. Marketing overseas for many years, MSA have successfully raised millions of dollars in investor capital.

Sarah Salarano is a paralegal at Mona Shah & Associates Global. She graduated from Emory University in December 2020 with a degree in Political Science and English.

Kyra Aviles is a paralegal at Mona Shah & Associates Global. She graduated from Oberlin College in May 2021 with a degree in Political Science and Law & Society.