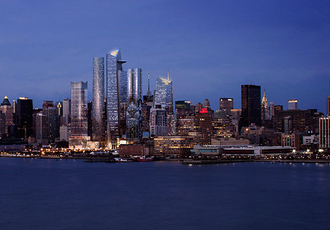 The lending and investment company has applied to be an EB-5 regional center in New York, a designation that will allow Greystone to raise cash from foreigners who invest at least $500,000 in U.S. projects in exchange for a green card.

The business of giving American green cards to foreigners who invest at least $500,000 in U.S. real estate projects has gained yet another participant in New York City, where the program, known as EB-5, has become an increasingly common way to finance major developments.

Greystone, a real estate lending and investment firm, has applied to become a so-called EB-5 regional center in New York and the Northeast, a designation that will allow the company to raise cash from foreigners seeking to secure permanent residency here. Developers use these centers to access EB-5 funds. Greystone also hopes to potentially use EB-5 fundraising capabilities to finance its own upcoming projects.

EB-5 has exploded in popularity as developers have sought to tap more foreign cash for projects in the city's booming real estate market. According to Justin Gardinier, an executive at Greystone who will be running the firm's EB-5 program, it is often used by builders as a form of mezzanine debt, a secondary mortgage on top of traditional bank financing to cover more of the cost of development. The funds sourced from EB-5 investors come at a substantial discount to typical loans of this type.

"We see the mezzanine loans as the sweet spot for the program," Mr. Gardinier said. "Today, the best construction mezzanine loan is probably 10% to 15% in interest. Through the EB-5 program, developers can access the same type of capital for about half of that."

The program has become popular in recent years. Nationwide, $2.6 billion was raised through EB-5 last year, with more than a third of that going to projects in New York City, according to Mr. Gardinier. The program generated only a fraction of that investment a decade ago, he said.

Several large developers, including Silverstein Properties, the Durst Organization and the Related Cos., have scrambled to tap EB-5 money. Related is in the process of becoming a regional center in order to source hundreds of millions of dollars through the program for its $20 billion Hudson Yards development. Silverstein Properties has set itself up as a regional center as well.

The program is administered by the federal government and allows foreign investors to receive residency in the U.S. Developers who use the program qualify by demonstrating that their projects meet certain criteria for creating construction jobs and other employment opportunities as well as other economic benefits. Investors in the program are mostly from Asia, Mr. Gardinier said. The investors earn a return on their money if the project is successful, but most do it mainly to get a green card, Mr. Gardinier said.

The number of regional centers has grown rapidly in recent years as developers have sought the designation to access money directly. Mr. Gardinier estimates there are currently more than 50 regional centers in the city, up from just a handful five years ago.