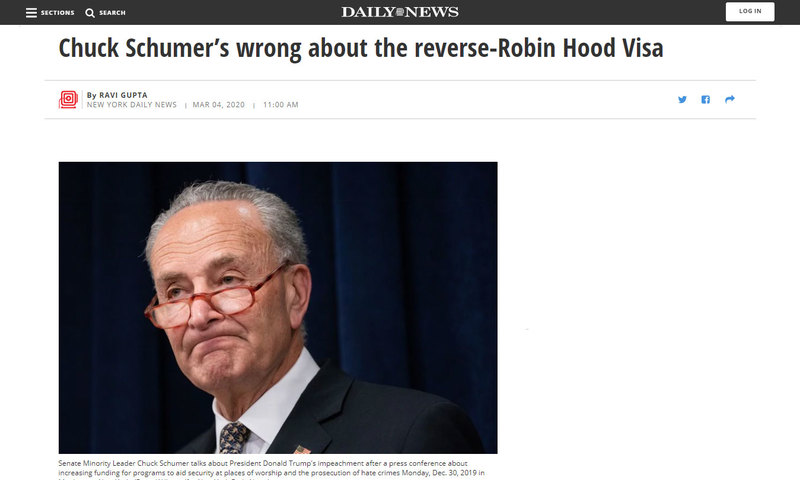 Senate Minority Leader Chuck Schumer talks about President Donald Trump's impeachment after a press conference about increasing funding for programs to aid security at places of worship and the prosecution of hate crimes Monday, Dec. 30, 2019 in Manhattan, New York.

Hudson Yards opened its doors last spring to much ridicule, called a “mini Dubai” and a “bargain-basement building-by-the-yard.” But as ugly and inaccessible as the project appears, the biggest sin is how Hudson Yards was paid for. The luxury mega-project was in part possible because of over $1.2 billion in financing through an obscure visa called the EB-5 — a visa that allows foreign nationals to purchase green cards in exchange for investing in American real estate projects.

The federal government recently moved to rein in this program, but our very own Sen. Chuck Schumer — along with Lindsey Graham and two other Republicans — is sponsoring a bill to weaken regulations and make it easier to qualify for the visa.

Why is Schumer teaming up with Republicans to weaken restrictions on this visa? One factor may be the senator’s extensive campaign contributions and close ties to companies that benefit from EB-5 capital. Developer Bruce Ratner, who built Barclays and Atlantic Yards with $475 million in EB-5 funds, is a long-time ally of Schumer’s. Employees of Related Companies, the developer of Hudson Yards and in some years the largest recipient of EB-5 funding, have donated $140,000 to Schumer during his tenure in the Senate. Fragomen, a law firm with a significant EB-5 practice, donated over $150,000 to Schumer between firm employees and its PAC. Other beneficiaries of the EB-5 program, such as Kushner Companies and Silverstein Properties, have donated significant sums to Schumer as well.

There’s a reason why wealthy donors like this program. EB-5 visas overwhelmingly fund projects in cities with already skyrocketing costs of living, like New York and Los Angeles. And the projects that use EB-5 funds are often targeted to the rich, such as the Waldorf-Astoria Beverly Hills, the Century Plaza Hotel in L.A., and Skyrise Miami. Cities that already have a surplus of the mega-rich and luxury towers end up with more of both.

At a time of record and rising inequality, we should ask why our immigration system prioritizes wealth at all. This is a visa program that gives the wealthy cheap access to capital to build playgrounds for the privileged while providing a loophole for even more wealthy people to move to places like New York City.

This is not how the program was designed. Its intent of the program was to spur development in high-unemployment neighborhoods. Foreign investors qualify for the visa with smaller investments if their project falls within an area designated as high unemployment or rural. These distressed areas are called targeted employment areas (TEAs).

But there’s no restriction on how large a TEA can be, which has led to gerrymandered districts that stretch far and wide to connect affluent neighborhoods to poorer ones — allowing for luxury developments financed through a program designed to spur jobs in low-income neighborhoods. As City Lab’s Kriston Capps explained, “The EB-5 looks like a form of reverse-Robin Hooding: Developers in wealthy districts tap unemployment in poorer ones in order to unlock foreign capital intended for distressed areas.”

The program has also been rife with fraud. As the New York Times reported, investigators have uncovered “numerous cases of fraud, discovered individuals with possible ties to Chinese and Iranian intelligence using fake documents and learned that international fugitives who have laundered money had infiltrated the program.”

In an attempt to rein in this program, the U.S. Citizenship and Immigration Services issued regulations in 2019 that include significant increases to investment requirements for EB-5 visas and strengthened oversight of recipients. But Schumer is pushing to weaken these restrictions. He wants to lower the threshold of capital required for investment outside of distressed areas— all but eliminating the incentive to invest in places like Harlem. His bill would also make it easier for investors to enter the country before their green cards are approved.