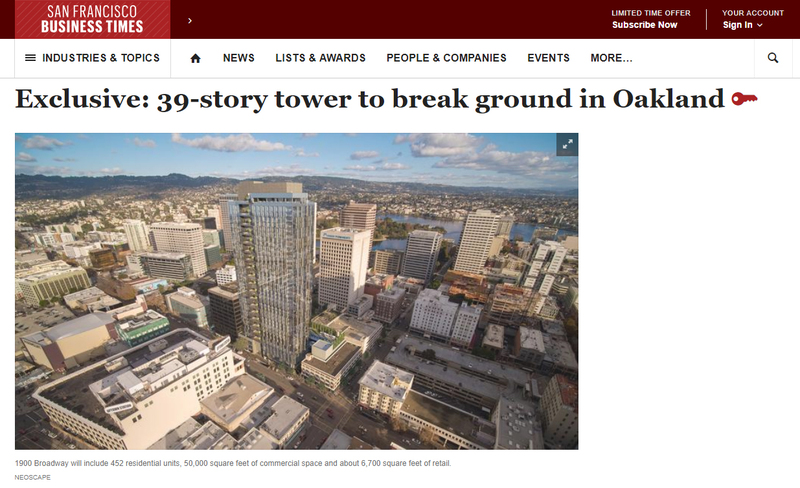 Lincoln Property Co. and Behring Cos. have partnered to build the massive mixed-use project at 1900 Broadway.

An ambitious 39-story tower next to Oakland's 19th Street BART Station is poised to break ground.

Construction at 1900 Broadway will kick off in June, with a projected opening date in 2021, developer Lincoln Property Co. and capital partner Behring Cos confirmed.

The mixed-use project will consist of 452 residential units, plus about 50,000 square feet of commercial space and 6,700 square feet of ground-floor retail. Entitlements also include restoration of the four-story Tapscott Building that has occupied the 19th Street and Broadway corner for nearly a century.

"It’s, in our view, as good of a site as there can be as it relates to public transit, housing and amenities," said Brandon Wang, executive vice president of Lincoln Property Co.

Several potential co-working tenants have expressed interest in the commercial portion in order to have access to clients living in the same building, said Colin Behring, CEO of Behring Cos. Of the residential units, 24 will be four-bedroom “co-living" apartments that can be shared in an effort to bring down rent. Behring declined to share the development cost of the project or rent estimates.

A slightly different version of the site was first approved back in 2015, after which developer Seth Hamalian of Mission Bay Development Group searched for financing. Behring Cos. was in contract to buy the property as of last January, the Business Times reported, but the deal hasn't officially closed yet, according to one source familiar with the matter.

This is Lincoln Property's first Oakland project. The company has a retail-and-office project under construction at 300 Grant Ave. in San Francisco's Union Square area, and has previously worked with Behring Cos. and a subsidiary of Chinese developer Gemdale Corp. to build 350 Bush St. and 500 Pine St.

Danville-based Behring Cos. has other EB-5 funded projects in the works, including three Oakland-Emeryville residential buildings with developer Madison Park Financial. The federal EB-5 program lets foreigners put at least $500,000 in American ventures to create 10 new jobs — in exchange for a green card at the end of two years.

Oakland has emerged as the next hotspot for both developers and tenants alike as the San Francisco market tightens. Earlier this week, TMG Partners project won approvals for a huge office tower down the street at 2201 Valley St, while Square, Inc. leased all of Uptown Station at 1955 Broadway in December.

Meanwhile, the city plans to add up to 29,000 new residential units and nearly 14 million square feet of office space in downtown alone before 2040.

People want to live closer to where they work, Behring said, and with both more office and residential supply hitting the market, retail and foot traffic will also get a boost.

"Oakland is just going to be an entire ecosystem for a new level of productivity," Behring said.

Solomon Cordwell Buenz and Thornton Thomasetti are the architects for the project. Suffolk Construction is the contractor.