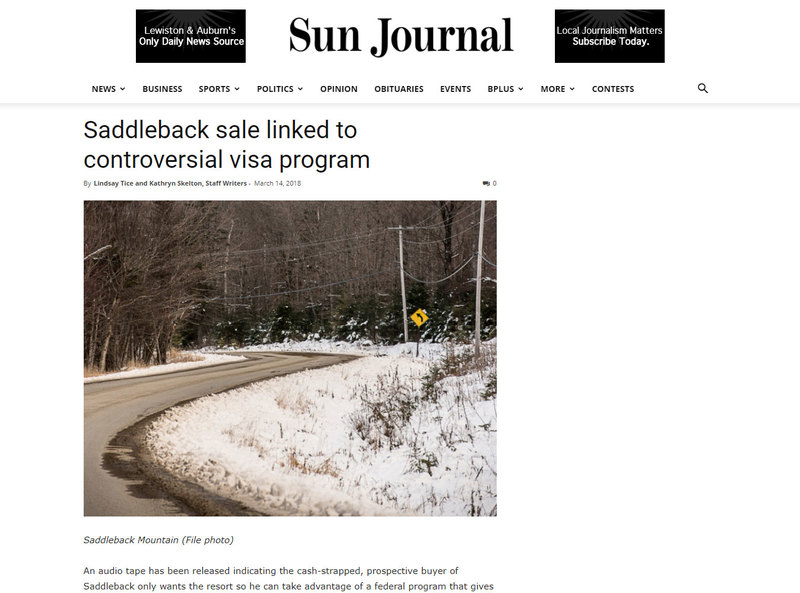 An audio tape has been released indicating the cash-strapped, prospective buyer of Saddleback only wants the resort so he can take advantage of a federal program that gives U.S. visas to rich foreign investors, prompting a Maine official Wednesday to call such a situation fraudulent if true.

Maine Department of Economic and Community Development Commissioner George Gervais said he had no desire to “take chances on projects that have no interest in actually following through.”

“There’s fraudulent activity that we want nothing to do with,” Gervais said. “If putting a project out there as a way to attract investments that have no intentions of getting off the ground, yeah, I’d say that is (fraud).”

Last summer, after searching for a buyer for two years, owners Bill and Irene Berry and Majella Group announced a “historic deal” for Australia-based Majella to buy the Rangeley resort, ski lifts, lodge and 6,337 acres.

Majella CEO Sebastian Monsour laid out plans to make Saddleback the “premier ski area in North America” and called reopening a “priority” as recently as October.

But in audio recorded in a September staff meeting and leaked to News Center Maine by a former employee, Monsour said he had “very, very, very” few funds and would be late on payroll.

According to News Center Maine, the sale to Majella has not been finalized eight months after it was announced.

The EB-5 program provides foreign investors with visas to live in America if they give at least $500,000 to a qualified project in the U.S. The program, administered by the U.S. Citizenship and Immigration Services, has been promoted as a way to infuse American projects with cash and to create jobs, but it’s also been the subject of much scandal.

In some cases, developers pocketed foreign investors’ money without completing a project, leaving them without their money or a visa.

In 2013, the U.S. Securities and Exchange Commission issued an alert to warn investors about scams seeking to exploit the EB-5 program. The program remains controversial, even as it is touted by those related to President Donald Trump. The Securities and Exchange Commission is currently investigating the family business of Jared Kushner, Trump’s son-in-law, over its EB-5 use.

While foreign investors and projects can connect on their own, the vast majority go through Regional Centers approved by U.S. Citizenship and Immigration Services. One of those Regional Centers was based at Saddleback, but it disbanded with no projects a few years after it was created.

Maine has three approved EB-5 Regional Centers. Two are based in the Boston area. The third is headed by the Maine Department of Economic and Community Development, or DECD.

The DECD won Regional Center approval last fall. Its center is expected to be operational in the next month or two.

Gervais said Majella had been interested in going through the DECD’s center for an EB-5 project at Saddleback, but the center wasn’t yet approved at the time. After it won approval, Gervais said, the DECD heard nothing more from Majella.

“Once we got approved, they stopped talking,” he said.

The DECD is establishing policies and procedures for its new center — important, Gervais has said, considering the alleged fraud and other problems that have plagued some centers, including a variety of scandals at centers in Illinois, New York, Vermont and Washington.

Gervais said he would not be interested in using the EB-5 program without producing a project — a situation Monsour seemed to have in mind for Saddleback, based on the leaked Majella tape.

“We want quality projects that will use EB-5 as it was originally intended to be used and attract foreign investment to the state,” Gervais said. “We need projects to be successful and be able to attract even more investment and other good projects down the road, so we can’t take chances on projects that have no interest in actually following through.”

Gervais said any developer that applies to the DECD’s Regional Center — including Monsour, if he chose to — will have to pass “a rigorous due diligence process.” The center, he said, will sponsor “only projects that have a high likelihood of success.”

The Berry family has owned Saddleback since 2003 and invested more than $40 million in improvements, according to published reports.

In July 2015, the family announced that without cinching a $3 million loan for a faster chairlift in the following two weeks, the upcoming ski season would be called off, and it was.

Saddleback had drawn 80,000 to 100,000 skier visits a year and employed 300 people during the winter, making it the third-largest employer in Franklin County, according to a news release at the time.

The community has had teases regarding new ownership — and high hopes — ever since.

A clerk at the Loony Bin Variety in Rangeley said people coming into the convenience store Wednesday were “bummed” at the idea of Saddleback not opening.

“I think the thought is it’s not going to happen,” he said. “(Majella) doesn’t give anybody any information about what’s going on — this is the first time anybody’s heard (anything) about it since they bought it.”

Ginny Nuttall, the designated broker and owner of Noyes Real Estate in Rangeley, said skiers aren’t looking for real estate locally but the market has kept moving right along by snowmobilers who are.

She said she was disappointed but not surprised to hear of the audio.

“I would like to see the opportunity for somebody else to purchase it because it doesn’t appear that this group is going to be able to go forward,” Nuttall said. “We need somebody who can come in and has enough money to not just run the ski area but develop it.

“Saddleback has a lot to offer the area,” she said. “The Berry family did what they could. They worked hard to make the mountain a good family skiing area, but we need it open again.”