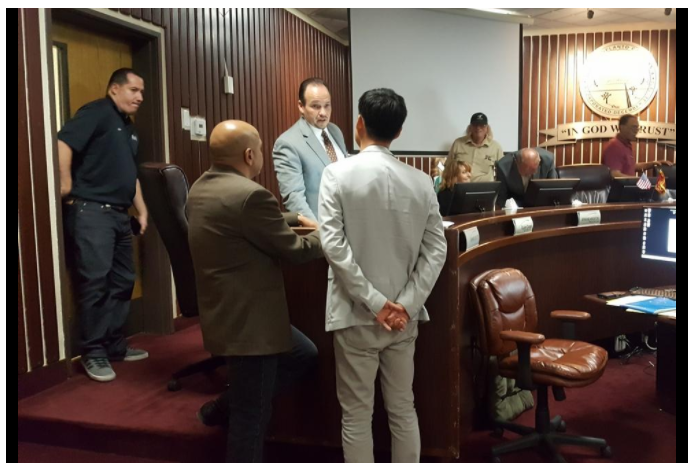 ruct a massive entertainment hub here, a project that would ultimately become one of the largest inside the city and potentially the hallmark of its turnaround.

Backed by PDI Developments Group Ltd., which represents a consortium of investors from Asia seeking to finance and develop large-scale projects in the U.S., the proposal calls for a hotel, convention center, retail shopping, restaurants and entertainment space, including a museum, on roughly 40 acres.

The project is planned near the corner of Air Expressway and Bellflower Street and could be completed by 2020, officials said.

On Tuesday, the City Council approved a memorandum of understanding with PDI, only the first step of what City Attorney Ruben Duran said would be a “well thought out, well managed, well planned development process.”

NJ Hahn, the project’s principal assisting the city and the investors, cited the burgeoning commercial cannabis industry’s expected ability to grow the city as the impetus for investor attraction and said the project could boast a landmark visible to commuters on busy Highway 395 and offer hospitality to visitors.

“But we want it to be more than that. We want it to be a place where people in the town can come by and hang out and do shopping and enjoy food and everything,” Hahn told the Daily Press. “I haven’t seen any other project that’s going to do that.”

Jessie Flores, the city’s economic development consultant, said the project represented Adelanto’s first true instance of leveraging Highway 395 as an asset and that the project’s timeline could be shortened due to the city’s quick-working planning department, which had earlier been outsourced to the private sector.

“We move pretty fast in the city of Adelanto. We’re a very unique city and our planning department, our land use department, is second to none as you well know,” Flores told the Daily Press. “We can streamline projects faster than any other city. So they estimate a three-year project, we can probably pull it off in two years especially now that you’ve got the funding.”

The project will be entirely bankrolled through the EB-5 Immigrant Investor Program, where entrepreneurs and spouses and unmarried children under 21 years old are eligible to apply for permanent residency if they accomplish two particular goals: Invest in a commercial enterprise in this country and plan to create or save 10 full-time jobs for qualified American workers.

It was created in 1990 by Congress to entice foreign companies to invest in job creation and capital projects in the U.S.

Hahn, who is overseeing other projects in the city, said he was working with four major asset management companies in South Korea that have already pledged the funds, which will be used for the epicenter, tentatively called “Landmark Synthesis Mall,” as well as another business venture in either Los Angeles or Orange county.

The agreement signed Tuesday will be part of a package Hahn said will jump-start the process, adding investors were also involved in a 77-story, three-tower project based in Houston.

Councilman Ed Camargo described the project as “incredible,” yet also tempered his enthusiasm amid reservation over the funding mechanism.

“On the EB-5 program, I know five, six years ago that was something the city was looking forward going in to ...,” Camargo said. “But it had a lot of ups and downs on it, and there were some concerns with the program itself.”

It garnered renewed attention in May, when the Associated Press — in detailing the program’s ties to developments connected to President Donald Trump and his son-in-law Jared Kushner, a senior adviser in the White House — reported on the program’s ills.

“The U.S.’s EB-5 program has been heavily criticized by government watchdogs and targeted by lawmakers of both parties in Congress, who say it promotes fraud and helps developers building megaprojects more than struggling communities,” the AP reported.

They noted that California Sen. Dianne Feinstein, a Democrat who once referred to EB-5 as a “Ponzi scheme,” had introduced a bill to end it and that Iowa Sen. Charles Grassley, a Republican, had said it “poses significant national security risks” and “may be facilitating terrorist travel, economic espionage, money laundering and investment fraud.”

“Defenders of the EB-5 program say it creates jobs and provides vital funding for projects across the United States,” the AP added, “from massive developments in New York to hotels, restaurants and small businesses in the Midwest and on the West Coast.”

Flores said there had been “no hesitation” to engage in a project funded entirely through EB-5, pointing to PDI’s experienced legal team on such matters. And Hahn, speaking generally, suggested the program had failed in the past because either the money wasn’t on time or that projects had used EB-5 only for partial financing combined with other sources.

The project garnered considerable excitement from Council meeting attendees and policymakers Tuesday, with Mayor Rich Kerr urging, “let’s sign the damn thing,” and John “Bug” Woodard offering up a single question: “How long does it take us to get the tractors out there?”

“We’re building a city, that’s the bottom line,” Flores said. “And we’re not waiting for anyone or anything.”