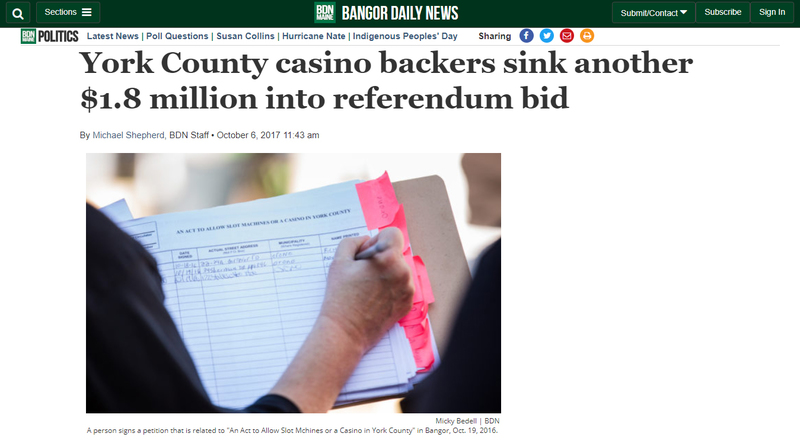 A person signs a petition that is related to "An Act to Allow Slot Mchines or a Casino in York County" in Bangor, Oct. 19, 2016.

The backers of the referendum effort for a York County casino put another $1.8 million into their campaign in less than two months, giving $100,000 to the firm of a former Maine attorney general who has supported the bid.

Documents filed Thursday with the state are the first look at the finances of Progress for Maine, a political action committee formed in August. It’s run by U.S. Virgin Islands developer Shawn Scott, who would have rights to the casino through one of his many companies.

All of the PAC’s $1.8 million came from Atlantic & Pacific Realty Capital LLC, a New York City-based company controlled by Scott and the head of a firm that operates in China to support the American EB-5 program, which gives green cards to foreign investors in new U.S. businesses.

That isn’t the first money spent to support the casino bid. Scott’s sister, Lisa Scott, ran a committee that sank $4.3 million into the campaign by April’s end. The Maine Ethics Commission started investigating that effort in June after Lisa Scott revised past campaign finance filings to say the money came from her brother’s Las Vegas company and a Japanese consulting firm.

Progress for Maine made a large build-up in less than two months. Nearly $575,000 alone has gone to Goddard Gunster, a Washington, D.C.-based political consulting firm that helped engineer the 2016 “Brexit” campaign when the United Kingdom voted to leave the European Union.

Another $200,000 went toward TV ad production and $100,000 went to the firm of former Maine Attorney General Andrew Ketterer, a Democrat who first identified himself as Progress for Maine’s lawyer at an August ethics commission meeting.

The campaign offered Ketterer up to the Maine media as an interview subject on the casino’s merits earlier this week. He told Maine Public that he has “studied the issue pretty carefully and I think it’s a good choice for Maine.”

Progress for Maine is being opposed by A Bad Deal for Maine, a PAC linked to Churchill Downs, the Kentucky-based gambling giant that owns Oxford Casino, which is one of Maine’s two casinos alongside Hollywood Casino in Bangor.