Changes on the Horizon: Discussions of Looming EB-5 Reform

The last six months have seen a lot of drama for the EB-5 Regional Center Program (“the Program”). Starting with the release of S. 1501 in June of last year – one of the first major bills proposing reauthorization and reform of the Program – an avalanche of draft bills, extensions, and revision attempts seems to have bowled over Congress and the EB-5 community. While the final result has been an extension of the Program without any changes until next September 30th, it is clear that reform is on the way.

One of the largest looming changes is the overhaul of Targeted Employment Areas (TEAs) – surely in response to well-covered controversy. Some critics have speculated as to whether TEAs allow “gerrymandering,” taking the Program away from “its roots,” and have voiced other concerns. Almost every new bill proposal to reform the Program has included changes to the TEA process, and most approaches have differed considerably. It seems safe to say that the future of TEAs will be drastically different – and likely much more complicated.

Before delving into our predictions of the future of TEAs in EB-5, let’s review the current process.

According to the federal legislation of the Program, a project location can be certified as a TEA if it meets the requirements for a Rural TEA or a High Unemployment TEA. This flowchart shows the current practice of determining whether a project location is eligible to be a TEA. 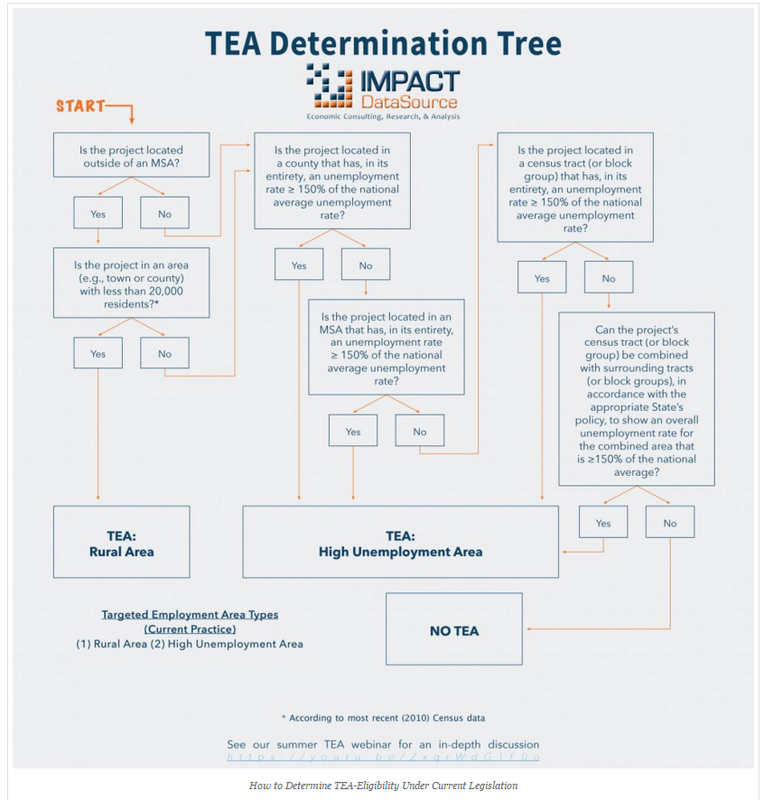 If a project location meets the requirements for a Rural TEA according to the US Census Bureau’s most recent decennial Census (currently, the 2010 Census), then it does not need to be “certified” prior to the submission of EB-5 petitions (I-824s or I-526s). Applicants need only include the relevant Census data with their submissions.

If a project location is eligible to be a High Unemployment TEA, it must be certified prior to submission of the petition(s) – i.e., a certification letter must be included in the materials sent to USCIS. Currently, certification comes from the state where the project is located, and each state has its own designated authority in charge of certifying TEAs. Therefore, one must request certification from the state-specific authority, which differs by state – for example, in California, TEAs are certified by the Governor’s Office of Business and Economic Development and in New York, by the New York Department of Labor.[1]

Since there are only two ways for a project to be considered a TEA (Rural or High Unemployment), it seems that the TEA process should be pretty simple, right?

Well … unless the project is in a Rural TEA location, then, no – not really.

For High Unemployment TEAs, there are two main issues that one must consider: what are the rules for forming the TEA, and which data is correct? The answers to these questions vary by state.

Example: How Forming a TEA Differs Between California and New Mexico

Since each state is in charge of certifying TEAs, the rules on forming TEAs are set by that state – therefore, there are multiple interpretations of how one can achieve TEA-eligibility, depending on where the project is located. Some states follow stringent criteria, while others are very liberal. See the example box to the right.

(Note that if a project location qualifies at the county- or MSA-level, some of these concerns are mitigated.)

Additionally, the data that the TEA-certifying authority uses when making the unemployment calculations varies by state as well. Most states, but not all, use data from the 2013 American Community Survey (ACS) (which must be combined with the most recent unemployment data from the Bureau of Labor Statistics for census tract-level TEAs). Furthermore, most states use calendar year data, but some states use fiscal year data or rolling year data.

Yeah, it’s confusing. Table 1 shows a summary of which of these two concerns one needs to consider when determining a project’s TEA-eligibility, based on the different ways a High Unemployment TEA could be determined. 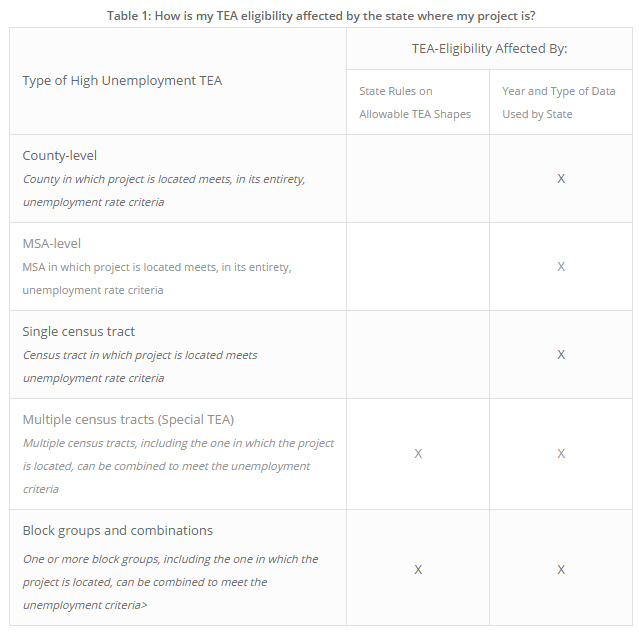 Back to the Interesting Part of the Story

But it looks like current practice is going to change – and it could change drastically. The proposed reforms to the TEA process have run the gamut – from no changes to TEA designations in H.R. 616[2], to all but eliminating TEAs in S. 1501[3], to a rather convoluted strategy involving five types of TEAs in a discussion draft that circulated Congress in mid-December[4]. In general, the proposed bills revising the Program have shown increased stringency in the determination of TEAs.

That last proposal – the discussion draft with five types of TEAs – seemed to be the closest that any legislation has come to passing in Congress and therefore might represent a convergence of reform approaches. We will review the changes presented in that proposal in our next article.

And don’t worry – we are closely following the legislation discussions and are ready to update our services as soon as a new law passes.