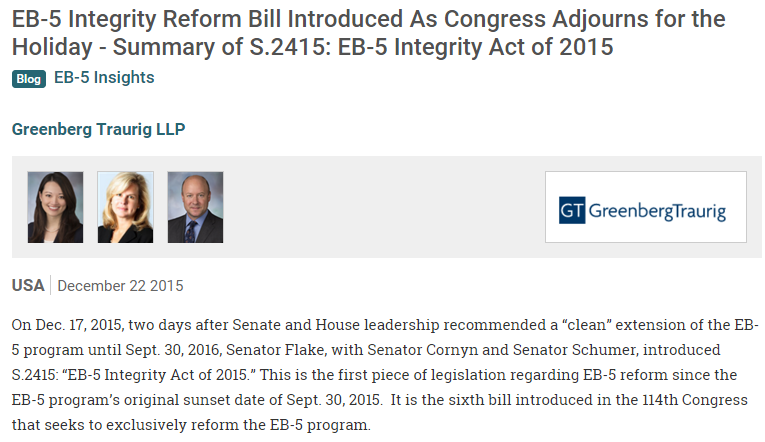 On Dec. 17, 2015, two days after Senate and House leadership recommended a “clean” extension of the EB-5 program until Sept. 30, 2016, Senator Flake, with Senator Cornyn and Senator Schumer, introduced S.2415: “EB-5 Integrity Act of 2015.” This is the first piece of legislation regarding EB-5 reform since the EB-5 program’s original sunset date of Sept. 30, 2015.  It is the sixth bill introduced in the 114th Congress that seeks to exclusively reform the EB-5 program.

Unlike most of the bills introduced in this Congress, this bill includes a provision for permanent reauthorization of the EB-5 program. Much of the proposed reforms focus on integrity measures that have been championed by the EB-5 industry throughout the year. The majority of the provisions mirror the reforms sought in S.1501 and the discussion drafts that circulated amongst stakeholders in November and December 2015. The following are some of the main integrity measures designed to reform the EB-5 program:

This EB-5 Integrity Act of 2015 does not include reforms to current policies such as the definition of Targeted Employment Areas or minimum investment amounts.  It is likely that when Congress returns from the winter recess for the second session of the 114th Congress, hearings and additional legislation may follow.  The EB-5 Integrity Act represents another step by Congress toward the significant reform of the EB-5 Regional Center Program.  The EB-5 Regional Center Program is set to expire on September 30, 2016.