After Overwhelming U.S. Visa Program, Where Will China’s Emigrants Go Next? 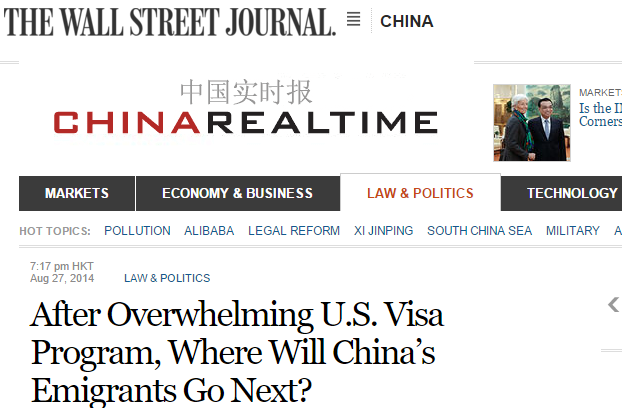 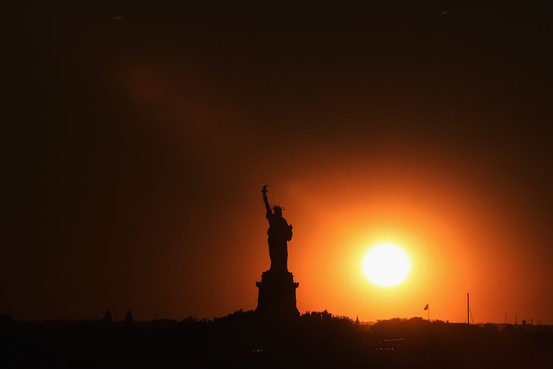 Wealthy Chinese hoping to move abroad have overwhelmed the immigration departments of the U.S. and Canada—their favorite destinations—this year. But will China’s rich who want a visa head elsewhere or will they hold out for the American dream?

The answer, immigration experts say, is both. Australia, Europe and the Caribbean are emerging as destinations for China’s rich, while Chinese investors still keen on moving to the U.S. are told to expect wait times as long as five years for their visas.

A U.S. State Department official told the Journal that the EB-5 program—which grants visas to those who invest $500,000 in a range of development projects—has hit its quota of 10,000 visas for the fiscal year and won’t receive new applicants until Oct. 1. Chinese applicants made up about 85% of the 10,000 visas granted under the program. It’s the first time in the program’s 24-year history that the quota has been reached.

Mr. Wang tells new clients to expect between three to five years to obtain a EB-5 visa and forecasts delays will only get worse in the future. 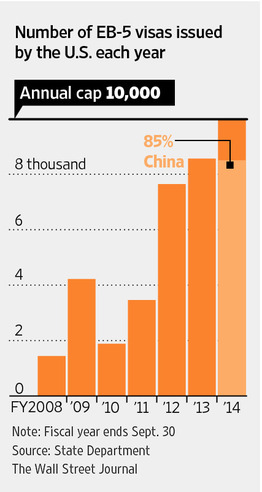 “For those who want to send their children to study in the U.S., we strongly advise them not to wait before the children get too old,” he said.

In February, Canada shuttered its investor-immigration program, which granted visas to those who lent 800,000 Canadian dollars (US$734,245) interest-free to one of the country’s provincial governments. The government said the program didn’t bring enough economic benefit, “significantly undervalued” Canadian residency and promised a new investor immigration program would replace it, though none has yet been launched.

At the time of the program closure, there were an estimated 48,000 applications made by mainland Chinese with the Canadian consulate in Hong Kong, and wait times were expected to be as long as five years. Those applications were canceled with the ending of the program. Some Chinese have tried to sue the government to have their visas processed, but the courts ruled against them.

The long delay in U.S. visas and the shuttering of the Canadian program is driving many Chinese to seek alternative destinations. Australia is emerging as a landing spot for the extremely wealthy, after the country launched its Significant Investor Visa program in November 2012, which grants residency visas to those who put 5 million Australian dollars (US$4.7 million) into a government-approved investment. At the end of July,  88% of the 343 such visas granted were to mainland Chinese, representing a total of A$1.5 billion worth of committed investments.

Glenn Ferguson, an immigration lawyer in Sydney who is handling about 25 investor immigration cases for Chinese applicants, said a visa can be granted within three months there. “It’s relatively quick,”  he said. “Compared to other programs, it’s expensive, but so far, the cost hasn’t been an issue.”

Gerry Power, director of business development at immigration consultancy Henley & Partners in Hong Kong, said his firm expects to see an uptick in business from Chinese looking for visas outside of the U.S. and Canada. Henley doesn’t promote the U.S. EB-5 program but instead steers its clients to more exotic locales like Portugal, Malta, Cyprus, St. Christopher & Nevis and Antigua, all of which grant residency visas to those who buy real estate in their countries.

“We should see more coming to us,” he said. “While we’ve seen a shift to the EB-5 program [after the Canadian program shut down], concurrently, we’ve also seen interest in residency programs like Portugal and Cyprus.”

Back in Beijing, Mr. Wang says that while real-estate-for-visa programs like Portugal’s will appeal to some, Canada, the U.S. and Australia will always remain the top destinations, no matter how long the wait or cost.

“The Chinese are still most interested in going to English-speaking countries. It’s the one language they want their kids to learn.”