Larry Wang has helped thousands of rich Chinese get to Canada. He’s no fan of new immigration policies 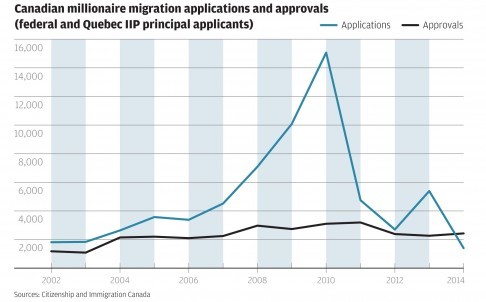 For the first time in recent years, wealth migration applications to Canada fell below approvals in 2014. However, a backlog of Quebec Immigrant Investor Programme applications will likely help maintain approval levels for a few years. Figures shown here include only principal applicants, not dependents. Graphic: SCMP

Larry Wang has quietly helped shape modern Vancouver, though few in the city have probably heard of him - unless they used his services to get here.

As the president of one of China’s top immigration consultancies, Well Trend United, Wang has helped thousands of rich Chinese move to Canada. He says his company, which employs hundreds of consultants around China, has enjoyed two decades of success, having “risen to become one of the largest, most influential immigration consulting firms in China on the back of … Canadian immigration programmes”. Larry Wang, president of Chinese immigration consultancy Well Trend United.But he’s not a huge fan of what he sees in those programmes lately.

Canada’s two largest wealth-migration vehicles were long the Federal and Quebec Immigrant Investor Programmes, which have brought about 200,000 rich newcomers since 1986. Most of them likely settled in greater Vancouver, and most have been Chinese.

But in 2012, the FIIP was frozen, then shut down last year, to be replaced by the Immigrant Investor Venture Capital pilot programme, a scheme which had only attracted six applications worldwide, as of June. The QIIP, meanwhile, last year introduced a tough set of  documentation benchmarks, demanding minutiae of applicants’ sources of wealth and income, and applications are down 74 per cent.

In short, Chinese millionaire migration to Canada is in a state of flux.

“We knew from the get go that the IIVC would attract very little interest, in spite of the Canadian government's claim that it was a replacement for the FIIP,” Wang told me this week. “If the goal of the IIVC was to attract the same applicants for the FIIP, then it was a woefully misguided and ill-designed attempt.  On the other hand, if the goal was to attract the only six people in the world who don't think the IIVC is a terrible programme, mission accomplished!”

Beijing-based Wang says the big problem with the IIVC, at least as a replacement vehicle for the once-popular FIIP, is a question of target audience.

“The Chinese investor applicants who applied for the FIIP and pre-revamp QIIP were typically well-established, already successful businesspeople in their late thirties or older, who achieved their success with neither English nor French language skills, not the younger, entrepreneurial start-up types for which the IIVC was presumably designed,” says Wang.

As for the QIIP, the new documentation rules, as well as a sense of uncertainty, are deterring some of Wang’s clients. “Putting in the time and effort to compile the documents is just the first step,” Wang says. “After a review of the documentation, an interview may be required. Further documentation may be requested. A further review by the federal government is the final stage before visa issuance. At any step along the way, and it is a long way, three years at least, it may be refused.”

[Incidentally, federal data show that 89 per cent of QIIP immigrants end up leaving the French-speaking province for elsewhere in Canada, but Wang says his firm encourages Quebec-bound clients to actually stay there and become part of Quebec society. “It simply makes good business sense for us to encourage this,” says Wang. “Otherwise the QIIP will be shut down.”]

Wang also sees increased competition for millionaire migrants “with the very popular American EB-5 programme and the increasingly popular European programmes coming on to the scene”.

This is not to say that China’s wealthy have turned away from Canada entirely; it remains a popular choice for what Wang calls “the traditional reasons” - quality of life and a good quality of education for their children.

“The interest is definitely still there but suitable programs are not,” says Wang. “If the IIVC is to be replaced by a suitable programme, if the QIIP relaxes their documentation requirements, if more PNPs [Provincial Nominee Programmes] re-open - there are many IFs here - then you will see the numbers return to Canada.”

Yet a pragmatic assessment means that risk has become a major concern, too, in the wake of Ottawa’s axing of the FIIP and subsequent dumping of more than 50,000 applicants and family members from the immigration queue. Most were Chinese. It was a decision that appalled Wang, whose firm helped organise opposition to the move.

Himself a Canadian citizen, who emigrated in the mid-1980s before returning to China to found his business a decade later, Wang sees the IIP’s ruthless termination and Ottawa’s treatment of his clients as a stain on Canada’s reputation, and one that carries racist overtones.

“This is the same country that imposed a head tax on Chinese immigrants and you can understand why many in China believe Canadian immigration policy is anti-Chinese,” says Wang. “Thus, Chinese applicants prefer an immigration programme that is stable and with a measure of guarantee.  After all, human nature is averse to risk.”

2012: All federal IIP applications halted again. Quebec application window opens in March; the target of 2,700 applications is reached in less than a month.