When they got wind that the city commission was about to approve a 14-story hotel next to their 22-story condo at 701 S. Olive Ave. downtown, they fired off angry calls and emails to the mayor and commissioners and girded for battle.

But by Tuesday, West Palm Beach officials had reassured them there’d be no instant approval, that by the time the proposal for a Canopy by Hilton luxury hotel gets vetted by various committees, neighbors will have had two or three months to raise objections and press for design changes.

Condo association president Stuart Agranoff said Tuesday he also heard from representatives of Driftwood Acquisition and Development, who told him that some views on the west side of the condo will be blocked, “but they’re sensitive to that” and there won’t be hotel windows staring into condo windows.

“Everything has been somewhat tempered at this point,” Agranoff said Tuesday morning. “It’s a long way before it gets finished.” 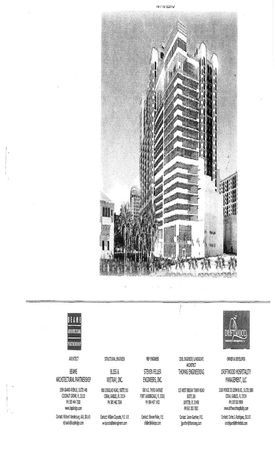 Driftwood plans a 150-room hotel with meeting rooms and a rooftop lounge and pool deck on its site, now a grassy lot at the southeast corner of S. Dixie Highway and Trinity Place, two blocks east of CityPlace.

The hotel’s eastern back could be as close as 25 feet from the western windows of the condo tower, by Agranoff’s estimate.

The project is scheduled for a Plans and Plats Review Committee meeting Nov. 12, an internal meeting with representatives of various city departments, from zoning, to fire and engineering, who will weigh in with critiques of the plan from their specialized perspectives. After that it will require several levels of approvals including a final OK from the city commission.

“We’ve always had in mind how the neighbors will be affected in the whole process,” Carlos J. Rodriguez, chairman and CEO of Coral Gables-based Driftwood, said Tuesday.

The hotel will have a slim design, not one that covers the whole 21,600-foot site, he said. Its first several stories will back up to the condo’s garage and the section above that will not have windows facing the condo tower, he said.

Some units will have views obscured but not many, and they will face “a beautifully designed building, and on top an infinity pool and lounge area,” Rodriguez said. The developer will not request variances to reduce the allowable distance from the condo tower, he added.

The ground floor will have a bar and restaurant open to the public, he said.

The developer will be hiring a local artist to transform the building into a work of art, he said. The Canopy will be “very expensive per room,” the equivalent of a 4 1/2-star hotel, he said.

Assuming the city grants approval, the developer plans to break ground late next year and the hotel should open in December 2017.

“This is a high-end product,” Rodriguez said. “We are dedicating time to design it the right way and make it look nice for the community.”

The hotel will employ about 340 people, about 140 of them for construction and 100 people full time after that.

It is being built with money from foreign investors through the federal EB-5 Immigrant Investor program. Under the program foreign nationals are eligible to apply for a permanent residence if they invest in a U.S. business and plan to create or preserve 10 jobs for U.S. workers, as was done with the Harbourside development in Jupiter.

The hotel will be managed by Driftwood Hospitality Management, the acquisition company’s North Palm Beach-based property management firm. The acquisition company, for which Rodriguez is executive vice president, has three hotels under contract and is pursuing five more projects.