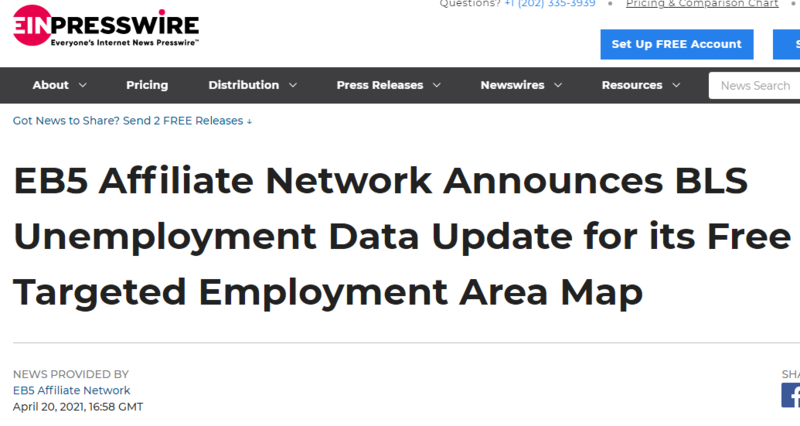 EB5 Affiliate Network (EB5AN), a leading EB-5 service provider, has updated the employment data on its targeted employment area (TEA) map for EB-5 visa investment projects across the United States. The TEA map has been updated to the most current Bureau of Labor Statistics (BLS) annual employment data by county.

One of the most useful features of EB5AN’s free national TEA map is the ability to instantly download a TEA qualification report. To assess whether a project site qualifies as a TEA, EB5AN’s TEA map uses all four approved methodologies permitted by United States Citizenship and Immigration Services (USCIS). The TEA map also indicates whether a project site is eligible for sponsorship through a USCIS-approved EB5AN regional center.

To meet USCIS requirements and be approved for a green card, EB-5 investors must submit a formal TEA qualification report as part of their Form I-526 petition. This report must be based on verifiable third-party data and must clearly show proper use of a methodology accepted by USCIS. EB5AN’s new TEA map allows users to instantly download a full TEA qualification report for free.

If a census tract does not qualify on its own, directly adjacent census tracts can be grouped together to create a custom area that uses the weighted average unemployment rate across any grouped census tracts. EB5AN’s new TEA map expedites this otherwise tedious process by automatically combining census tracts, eliminating any guesswork or errors in determining TEA qualification.

EB5AN’s TEA map is based on the latest available employment data, with the most recent BLS 2020 employment data by county which was released in April 2021. EB5AN updates the map’s underlying data twice a year: once in April when BLS data is released, and once in December when ACS data is updated.

About EB5 Affiliate Network, LLC: EB5AN is a leading national EB-5 consulting firm and one of the largest regional center operators in the United States. EB5AN owns and operates 14 regional centers covering more than 20 states. EB5AN specializes in providing turnkey EB-5 documentation and regional center sponsorship solutions to project developers seeking EB-5 capital for their own projects. The firm is led by an international team from a diverse set of institutional backgrounds in law, finance, management consulting, private equity, and real estate.
Jeremy Shackle
EB5AN
+1 800-288-9138