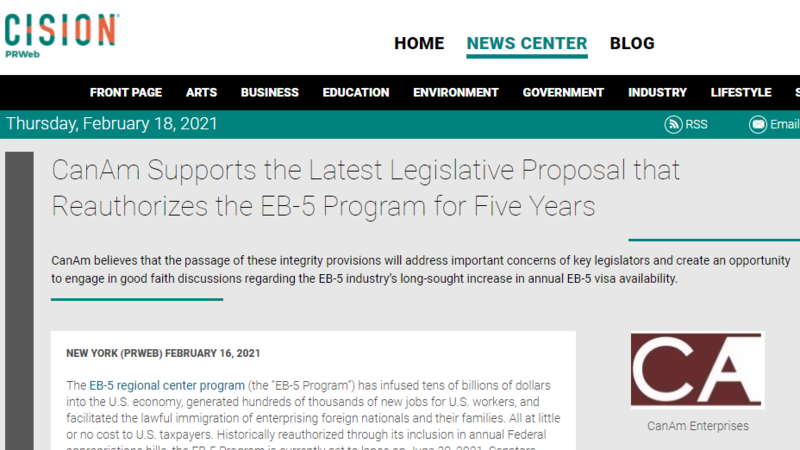 The EB-5 regional center program (the “EB-5 Program”) has infused tens of billions of dollars into the U.S. economy, generated hundreds of thousands of new jobs for U.S. workers, and facilitated the lawful immigration of enterprising foreign nationals and their families. All at little or no cost to U.S. taxpayers. Historically reauthorized through its inclusion in annual Federal appropriations bills, the EB-5 Program is currently set to lapse on June 30, 2021. Senators Grassley and Leahy are expected to introduce bipartisan legislation to extend the EB-5 Program for 5 years and implement various oversight and integrity enhancing measures. CanAm Enterprises strongly supports the anticipated Grassley/Leahy legislation.

There have been numerous lapses in the EB-5 Program in recent years; however, each such lapse was short-term and ended with a further reauthorization. Importantly, no recent temporary lapses led the United States Citizenship and Immigration Services (“USCIS”) to deny, terminate or revoke immigration benefits. Rather, USCIS has typically held investor petitions in abeyance (i.e., put on hold) until the next reauthorization, and in some instances even allowed certain EB-5 filings to continue notwithstanding the lapse.

“It would be a substantial departure from decades of precedent to indefinitely cancel the EB-5 Program, and we simply do not believe that the current pro-immigration administration, Congress or USCIS would retroactively sabotage or otherwise endanger thousands of qualifying EB-5 investor families with pending immigration applications,” said Tom Rosenfeld, President and CEO of CanAm.

CanAm sees a real opportunity to end the streak of consecutive short-term reauthorizations and temporary lapses by securing long-term extension of the EB-5 Program with the passage of the bipartisan integrity provisions long sought by Senators Grassley and Leahy. CanAm, along with a number of industry stakeholders, believes that the passage of these integrity provisions will address important concerns of key legislators and create an opportunity to engage in good faith discussions regarding the EB-5 industry’s long-sought increase in annual EB-5 visa availability.

“At the very worst, in the unlikely event that the Program is not reauthorized,” commented Mr. Rosenfeld, “I am confident that there would be a successful bipartisan effort to undo any harm to existing investor families. Needless to say, CanAm would be at the forefront of a proactive industry effort – both legislatively and through the U.S. federal courts, which generally disfavor the application of regulations retroactively – to ensure that the interests of our investor families are protected.”

For these reasons, CanAm is confident that the EB-5 Program will continue to thrive past June 30, 2021 and we strongly support the passage of the bipartisan EB-5 legislation to be proposed by Senators Grassley and Leahy.