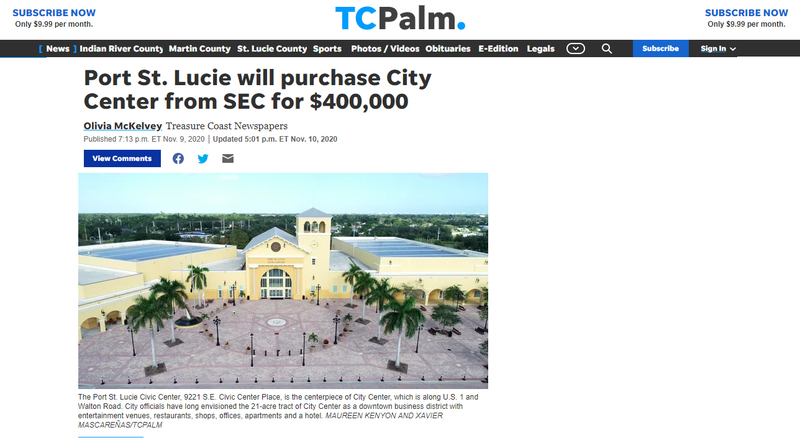 The City Council on Monday approved a plan to buy City Center from the federal Securities and Exchange Commission for $400,000.

An SEC receiver has had control of City Center since 2015 after discovering the developer at the time, a Chinese national named Lily Zhong, was defrauding investors through the EB-5 visa program.

"The city has stood by, and hoped, and continued to wait for the private sector to figure out how to buy City Center from the SEC," Mayor Greg Oravec said. "But we can't wait for that to happen anymore."

While multiple City Council members said they are not "big fans of being in the real estate business," they all backed the move,  aimed at kickstarting development the city has wanted at City Center since 2001.

"We have to control the debt and provide guidance," Blackburn said.

The city's purchase of the 21 acres — between U.S. 1 and Walton Road — comes in the wake of numerous failed attempts to develop City Center since 2005 and other legal hurdles encountered along the way.

The city entered into a public-private partnership with De Guardiola Properties in 2005 to build more than 1,000 residential units, stores,  office space and four parking garages. The city had borrowed money and construction was underway when the Great Recession hit.

By 2010, De Guardiola could not complete the project, unpaid taxes started piling up and the the project faced foreclosure.

Zhong entered the picture in 2015, buying the undeveloped property from De Guardiola for $500,000..

Hope that she would be the one to make the City Center vision a reality was short-lived once federal authorities discovered Zhong was using money from foreign investors, intended for City Center and residential projects in Palm Bay, to instead purchase luxury cars and a boat, according to SEC documents.

Since then, the SEC has been unsuccessful in finding a developer to buy City Center, mainly because of its $46 million in back taxes and assessments.

The City Center property is valued at roughly $15 million, according to property appraisals, but that's without accounting for the delinquent taxes and special assessments.

Take that into account, and its value is negative $25 million — the reason why two interested buyers within the past three years have walked away.

Now the city hope it can avoid avoid scaring off interested developers who, would be the massive tax burden and assessments on top of the purchase price. The move will allow the city to sell off individual parcels to developers and forgo back taxes — the same strategy the city used when purchasing parcels of Southern Grove to avoid foreclosure and tax sales.

Taxpayers should see nocost beyond the $400,000 purchase price, according to Blackburn.

With the city already paying $1.7 million annually for special assessments, officials hope to bring in high-profile deals like they did in Southern Grove, then defer property taxes.

The purchase from the SEC will take up to 90 days, according to Blackburn.

"I do think this is the beginning of the last chapter," Blackburn said. "I think we can now have [City Center] in our control and fulfill its destiny."