Groundbreaking on $1B PhoenixMart Set for November 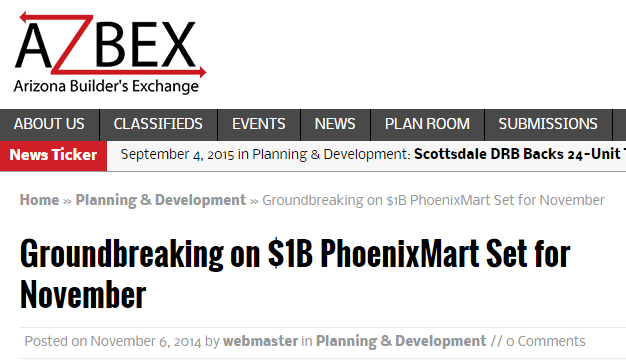 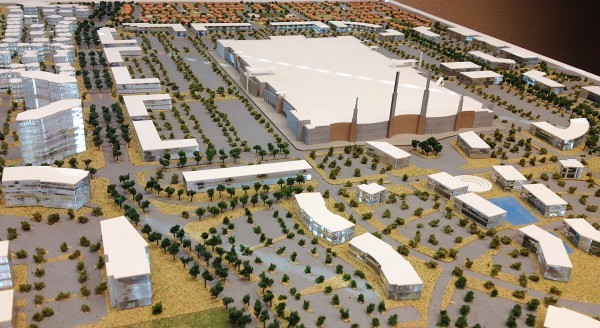 If all goes well, work could begin at full speed in mid-November on PhoenixMart, a global trade center intended to boost U.S. exports by housing 1,740 wholesalers and manufacturers.

The 1.5MSF building, roughly the size of 24 football fields, is the linchpin of the billion-dollar, 585-acre mixed-use project NALTEC, or North American Logistics, Trade & E-Commerce City. It will be built about two miles east of Interstate 10 on the north side of Florence Boulevard.

The development plan is expected to come before Casa Grande’s City Council in the next week or so.

Some initial work has begun and if the city approves a grading permit, work will begin in earnest mid-November, Rob Kobierowski predicted. He is corporate director of planning and construction for the master developer, AZ Sourcing.

PhoenixMart, described as revolutionary by an executive, could be open for tenants in November 2015.

NALTEC’s Phase One, worth more than $200M, includes site work, PhoenixMart, multi-family housing and a hotel (flag yet to be named), for a total of 150 acres. An electrical sub-station on the site will be managed by Casa Grande-based Electrical District No. Two, or ED2.

The design-build general contractor for the PhoenixMart building is Layton Construction Co.  They were chosen for their recent experience building a 1.5MSF distribution center for Fortune 500 retailer Marshalls in a business park at 55th Avenue and Lower Buckeye Road in southwest Phoenix.

Vendors in PhoenixMart will be organized in six areas: electronics and entertainment, fashion and variety, auto manufacturing, office and recreation, home and hotel, and food and beverage.

“Not only is PhoenixMart revolutionary in that we have multiple categories from which customers may choose to visit … but we are open to both wholesale buyers as well as the general public,” said Doug Singer, chief operating officer of PhoenixMart.

“Of the 1,740 suites, a minimum of 152 will be retail oriented selling to the general public. The restaurants and food court will also be open to the public.”

An exhibit hall will cover 52KSF to accommodate 250 trade-show booths.

“We can have a different trade show going on each week of the year,” Singer said.

His goal is to attract trade shows before and after exhibitors go to a larger show in, say, Phoenix or Las Vegas, the top trade-show market in the U.S.

A portion of PhoenixMart will be covered by a second floor of 120KSF for VIP executive suites, an upscale restaurant and bar, and conference rooms and classrooms

At build-out, NALTEC is planned to include a hotel, a spa and resort, office space and 296 multi-housing units built above service entities such as dry cleaners, a chiropractor, an acupuncturist or a yoga studio. It will also include warehouse and distribution space and light industrial.

“The tenants will be the primary driver of jobs,” Kobierowski predicted. “We’ll have employees available for them if someone calls in sick…We’re providing a lot of services, and one is employment.”

Support businesses are expected to be on site, such as accountants, attorneys, business services and rental cars.

Singer said financing is in place through the  EB-5 federal program.

The birth of NALTEC was a vision of AZ Sourcing CEO Elizabeth Mann, who discovered a similar concept in Yiwu, a town southwest of Shanghai.

“We started as a small company with a big vision,” said PhoenixMart President Jeremy Schoenfelder.

Arizona has potential to be trade hub

“We think this project has a lot more to do with the growth of Arizona. Arizona has the potential to be much more of a trade hub than it is. This is part of that,” Schoenfelder said.

Singer said he wants to bring in more U.S. manufacturers to be tenants at PhoenixMart.

“This is much more than a marketing play,” Singer said. “The mart is not meant to be a mall; that’s just part of the project. It’s for people to come in and buy U.S. goods.”

For example, he said, a businessman in Vietnam may want to build a hotel to cater to Americans who want to stay in familiar surroundings.

“The hotel owner could come to PhoenixMart for sheets, towels, wall coverings … everything he needs to furnish the interior of that hotel.”

Singer indicated there are untapped markets.

Even though the U.S. and Europe have suffered from the recession, a lot of other countries have continued to grow.

“China has the largest middle class in the world, and is second in billionaires in the world behind the U.S.,” Singer said.

Other markets rich for tapping, he said, include South America, Central America, Canada and Mexico.

“You can’t find American goods in Mexico,” so a retailer there could buy merchandise at PhoenixMart, he said. “It would be one easy stop here for them. “

Estimates are that two-thirds of goods marketed at PhoenixMart would be U.S-made, Schoenfelder said.

“The U.S. doesn’t market themselves well for export,” he said. “We’ll be a facility to make both importers and exporters happy.”

He said the four ultimate goals of the project are building brands, increasing sales, distributing more efficiently and boosting e-commerce.