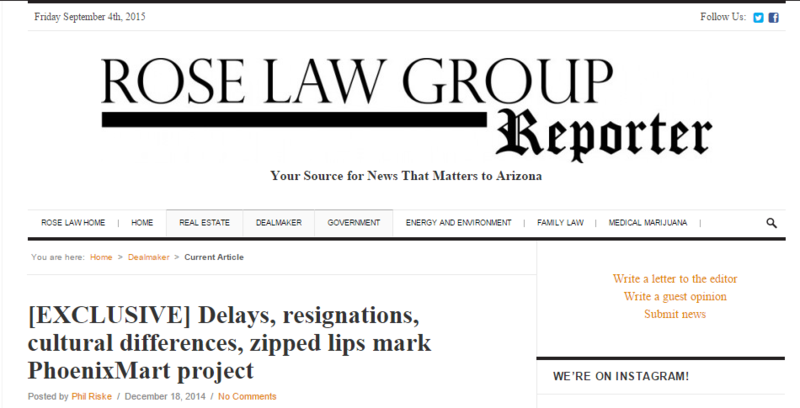 A nation, a workplace, an ethnicity, a passion, an outsized personality. The people who comprise these things, who fawn or rail against them, are behind Merriam-Webster’s 2014 word of the year: culture.

Few people these days are willing to go on the record about frustrations that abound with the massive PhoenixMart project on the outskirts of Casa Grande. As one city official put it, things are being kept “close to the vest.”

The $1B, 585-acre, 1.7-million-square-foot global product sourcing center plan hit the news in 2013, touting an eventual 8,000 direct and indirect jobs, with comments it would change the face of Casa Grande. The development, which broke ground in November 2013, is an international venture of AZ Sourcing, a Chinese company with various real estate/commerce developments in Seattle, Las Vegas, Los Angeles, Phoenix, Hawaii, Mexico, as well as in Shanghai, Beijing and Hainan Island.

During a Casa Grande Planning and Zoning Commission meeting in October, AZ Sourcing then-CEO Jeremy Schoenfelder pushed back that completion date, saying building the facility might extend into early 2016. Construction had not yet begun.

“Every time you come before the committee it’s being pushed back a little bit,” Commissioner Dr. Joel Braunstein said. Two months later, Schoenfelder became the second PhoenixMart boss to resign since the project was announced. He replaced Steve Betts, who moved on to Chanen Construction after only three months with AZ Sourcing.

“In the case of Jeremy, he has been considering an offer from a global company that is more in line with his long term goals for some time, but wanted to make sure the project was far enough along so his leaving would not cause unnecessary delays,” Casa Grande Mayor Bob Jackson said.

Rose Law Group Reporter was unable to contact Schoenfelder, who might still have a financial interest in PhoenixMart, a source familiar with the situation said. Records show in his position he often found himself in the middle of disagreements between farmers and developers as plans for the project moved forward.

While Betts declined to be interviewed for this report, a source speaking only on conditions of anonymity said Betts’ by-the-letter management style conflicted with the Chinese approach to business. The same source said AZ Sourcing has had some problems with Casa Grande city officials over failure to follow various code and other requirements.

Talking to Rose Law Group on background, a former Arizona businessman who has done business the Chinese said they sometimes cut corners and change plans and agreements at the last minute.

“They are difficult to work with,” he said. “Contracts are at a premium in the United States, but because Chinese business culture tends to value careful contemplation and relationships, contracts are less important there. Business people might not ever sign contracts and simply operate on a handshake basis. But even if you do get a contract, don’t expect this to mean the deal begins immediately. The success of a deal will be heavily dependent on ongoing social relationships,” stated a business consulting Website.

Records show that when AZ Sourcing announced the PhoenixMart project parts of the 500-plus-acre project were to be a hotel and residential subdivision, which developers said could house thousands of workers. But later, developers changed course, calling to to turn most of the residential area into a commerce and light industry section. Requests they received indicated that is what potential tenants wanted to see, adding part of the original residential area has a pipeline under it, making development of homes a problem.

The change was approved 6-1, with commission member Joel Braunstein opposed, according to a report of the meeting.

“As I said at the last meeting, this has been almost two years ongoing and there’s nothing been going on, who knows what AZ Sourcing is going to want to do a few years from now? I would like to see them show what they’re going to do before they ask us for all kinds of promises down the road.”

Commissioner Ruth Lynch said, ” This is a huge undertaking, and I didn’t expect to see it built overnight. I just think there are many things going on that the public, me included, has not seen. But that doesn’t mean that things are not being accomplished.”

Phone calls and e-mails to Mann and her communications director requesting an interview were not returned.

“I think everyone is frustrated,” Mayor Jackson told Rose Law Group Reporter. “They have made many commitments to time frames and not met them. That being said, the site needs all types of infrastructure, water, sewer, electric, and roads.

“Coordinating all the players has taken time, the funding is thru EB 5, and the feds have not been very forthcoming with the visa approvals.

“I think they certainly were overly optimistic about their ability to get thru all the issues.”

Jackson said the project will change the face of Casa Grande.

“Sure it will. We will have the ability to have new distribution and light manufacturing companies that are showcasing products in the Phoenix Mart that may need to expand and find our location ideal to serve their customers. It also affords us the exposure to international markets.

A recent editorial in the Casa Grande Dispatch stated:

“Plans for the huge wholesale center PhoenixMart are moving ahead, and the city of Casa Grande has been working on an arrangement to extend a sewer line to the eastside site, with the developers paying much of the cost.

“Besides having a concept that is difficult to understand, PhoenixMart is a major, complex project that requires time to become all put together. Meanwhile, some residents have grown impatient or incredulous. Although a ceremonial groundbreaking was held several months ago, the lack of actual construction will dampen expectations somewhat until the time is right. But the project appears to be very much alive and should mean a major economic boost.”

Timeline for phases of PhoenixMart construction:

The City of Casa Grande approved the Preliminary Plat in July. The Final Development Plan and Final Landscape Plan are under review by the City. Layton Construction has been awarded a Design/Build pre-construction contract for the PhoenixMart building and will be responsible for the final plat, fire model revisions and obtaining city permits for the final building construction documents.

Agreements are in development with Electric, Water, Sewer and Gas to serve the site. The electric agreement with ED2 is under review by the ED2 Board in October. The water master plan was completed in July and the master water agreement will be negotiated in the coming month. Sewer design for the offsite installation is underway. The City selected a Contractor for construction of the offsite sewer line. Discussion with Southwest Gas continues.

The Casa Grande City Council in December unanimously approved a measure authorizing the city manager to acquire the easements and rights of way necessary along the route of a planned $10 million sewer line extension and start any condemnation actions that might be necessary.

The expansion will extend the city’s sewer lines east of Interstate 10 to the 585-acre $1B development.

The Entrance Monument Signs and landscaping are complete.

Progress continues for the Welcome Center at City Gate.   The City approved tenant improvement plans and construction passed several inspections on those improvements. Two areas provide space for visitors to stop in, experience a replica of the suite layout and talk to leasing experts.