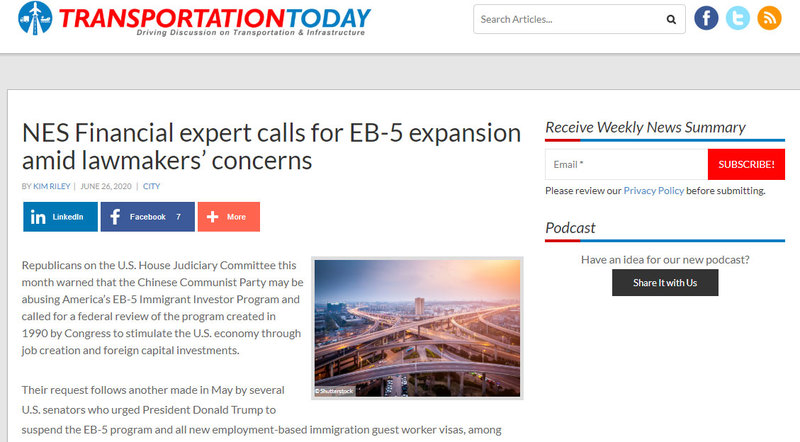 Republicans on the U.S. House Judiciary Committee this month warned that the Chinese Communist Party may be abusing America’s EB-5 Immigrant Investor Program and called for a federal review of the program created in 1990 by Congress to stimulate the U.S. economy through job creation and foreign capital investments.

Their request follows another made in May by several U.S. senators who urged President Donald Trump to suspend the EB-5 program and all new employment-based immigration guest worker visas, among others, given the sharp rise in unemployment due to the coronavirus pandemic.

However, according to one financial expert, the EB-5 program’s goal to encourage foreign investment may very well be the exact remedy needed to help the U.S. economy rebound from the impacts of the COVID-19 pandemic.

“I think it would be a bad idea to suspend the program,” said Reid Thomas, executive vice president of worldwide sales and marketing at NES Financial, a Silicon Valley financial technology company that serves private equity, commercial real estate and Fortune 1000 clientele, providing services such as fund administration and specialized EB-5 administration. “Honestly, I think it would be wise to expand it.”

In fact, Thomas told Transportation Today that federal lawmakers should seek to include EB-5 expansion in the next pandemic emergency relief funding package to help stimulate the economy.

“I think the EB-5 program probably has more security with the background checks and other things than any other immigration program does,” Thomas said. “It’s a shame the bad rap it gets.”

There have been concerns expressed about the EB-5 program’s reputation.

The lawmakers requested that the U.S. Government Accountability Office (GAO) review the extent to which the Chinese Communist Party (CCP) is abusing the EB-5 program, which is overseen by U.S. Citizenship and Immigration Services (USCIS) and provides a path to citizenship for immigrants who invest a certain amount of money and create jobs within the United States.

Some critics of EB-5 have referred to it as the “green card for sale” program and cited instances of fraud.

“Although the EB-5 program’s goal of stimulating capital investment and job creation in the United States is laudable, it has become clear in recent years that the CCP may be abusing the program to gain access to U.S. permanent residency for their members,” the lawmakers wrote in a June 15 letter sent to GAO Comptroller General Gene Dodaro.

For example, between 2012 and 2018, 80 percent of the nearly 10,000 EB-5 visas available each year went to Chinese-born investors, according to the congressmen, who noted that the vast majority of the EB-5 backlog currently consists of Chinese investors.

“The Chinese investors have proven they are willing to wait as long as ten years to receive an immigrant visa,” the members wrote.

And while GAO previously analyzed the progress that the USCIS had made to detect and prevent fraud in the program, its 2016 report on the matter did not examine national security concerns associated with the EB-5 program, according to the representatives.

“As Congress reevaluates our relationship with the People’s Republic of China, the time is ripe for GAO to again examine the EB-5 program,” wrote Jordan and Reschenthaler, who requested that the agency report on several related issues, including any improvements by USCIS to detect fraud in the program, as well as the CCP’s efforts to avoid fraud detection.

But Thomas says that like nearly all unique investment models, the EB-5 program also is susceptible to bad actors. But to help, the USCIS in July 2019 released EB-5 regulations in a final rule to modernize the program and restore to it some level of integrity.

At the same time, U.S. Sen. Chuck Grassley (R-IA), a staunch advocate for years to reform the EB-5 program, in September 2019 teamed up with U.S. Sen. Patrick Leahy (D-VT) to introduce the bipartisan EB-5 Reform and Integrity Act of 2019, S. 2540, which would promote and reform foreign capital investment and job creation in American communities, among other provisions.

Sen. Grassley told Transportation Today earlier this year that both the USCIS regulations and his legislation are needed to fix the flaws in EB-5 and ensure that it works as Congress intended when the program was created.

Despite the politics around the EB-5 program, Thomas does not think the baby should be thrown out with the bathwater, so to speak.

“We just need to be more diligent about the integrity and transparency of the EB-5 fund process,” Thomas wrote in a May 14 guest commentary published in the Silicon Valley Business Journal.

To do so, Thomas suggested the use of end-to-end process management; real-time tracking of the required sector compliance and impact metrics; and onboarding, managing and reporting on large pools of limited partners regardless of average investment size. “This isn’t some pie-in-the-sky proposal; the technology and processes exist to make it happen,” he wrote.

Additionally, while there currently is heightened tension between the United States and China, the U.S. Department of Homeland Security conducts extensive background checks on all EB-5 program applicants.

“There is a tremendous amount of detail in these checks and the documentation takes thousands of pages,” Thomas said. “If some bad actors wanted to come to this country, probably the toughest way for them to come would be through EB-5.”

And while EB-5 is popular in China, there are plenty of other countries with interested investors who are also considering the program, said Thomas. “The demand is there for U.S. immigration in many, many countries around the world,” he said.

Thomas also suggested that the EB-5 program could be included as part of a $1 trillion infrastructure proposal being prepared by the Trump administration.

A preliminary version being prepared by the U.S. Department of Transportation would reserve most of the funds for traditional infrastructure work, like roads and bridges, but also would set aside federal funding for 5G wireless infrastructure and rural broadband, according to Bloomberg, which also reported that the administration sees the pending reauthorization of an existing U.S. infrastructure funding law, which expires on Sept. 30, as a possible way to push through a broader infrastructure package.

Including EB-5 in that package would be a great way to put people back to work that doesn’t cost the American taxpayer anything, Thomas said. “It’s a no-taxpayer-cost stimulus program … that the country could really benefit from.”

Or possibly modifying the EB-5 program to be an infrastructure-type program also could be a good way to create jobs in the near term and get the economy going again, he added, saying the program “is a great tool for infrastructure projects.”

“At the end of the day, EB-5 is a job-creating program, so why shouldn’t it be expanded,” Thomas said.