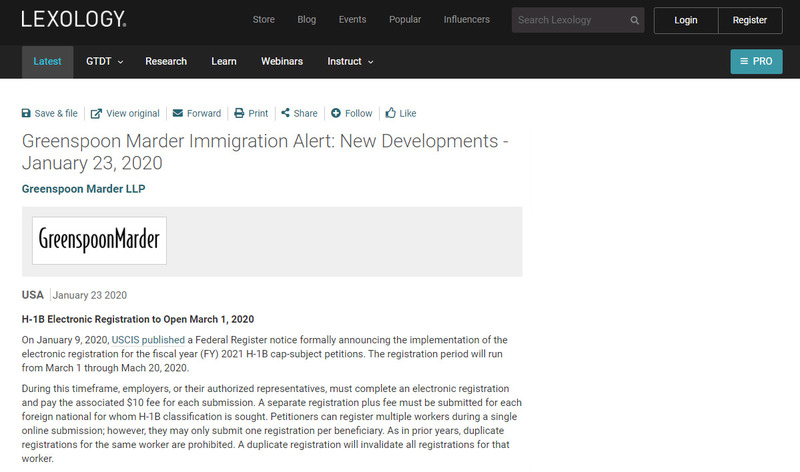 On January 9, 2020, USCIS published a Federal Register notice formally announcing the implementation of the electronic registration for the fiscal year (FY) 2021 H-1B cap-subject petitions. The registration period will run from March 1 through Mach 20, 2020.

If more than a sufficient number of registrations are received during the registration period, a random lottery will be conducted selecting the number of registrations projected as needed for the fiscal year. Selected registrants will be notified by no later than March 31, 2020. These prospective petitioners will have the opportunity to file their cap-subject petition for the named worker, with complete supporting documentation, within the filing period indicated on the eligibility notice.

To date, information about the electronic portal has not been released. USCIS has indicated that it will provide ample time, prior to the start of the registration period of March 1st, for the public to familiarize themselves with the electronic registration system.

The registration requires only basic information about the company and each requested worker, including:

The US Department of State released the February Visa Bulletin. USCIS has not yet announced if it would accept adjustment of status applications based on the Dates for Filings or Final Action Dates chart for family and employment-based preference categories.

As to the employment-based preference category, there was no movement in the Dates for Filing. For Final Action Dates, the new cut-off dates for issuance of an immigrant visa will be as follows: