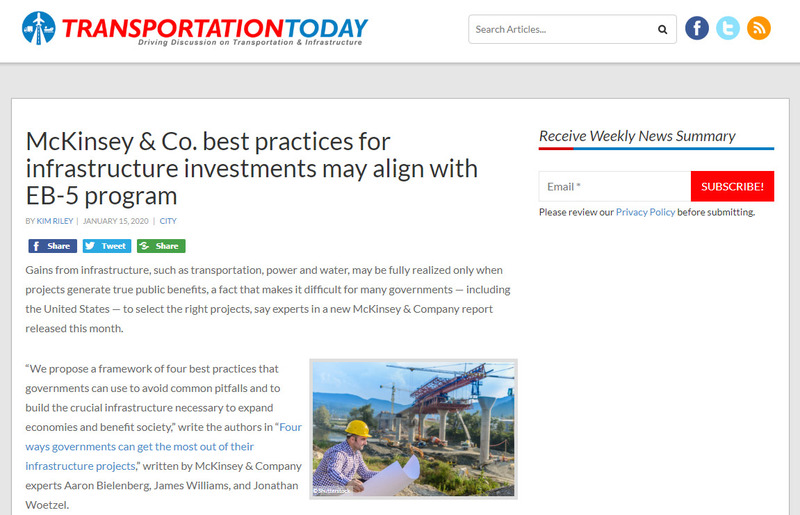 Gains from infrastructure, such as transportation, power and water, may be fully realized only when projects generate true public benefits, a fact that makes it difficult for many governments — including the United States — to select the right projects, say experts in a new McKinsey & Company report released this month.

“We propose a framework of four best practices that governments can use to avoid common pitfalls and to build the crucial infrastructure necessary to expand economies and benefit society,” write the authors in “Four ways governments can get the most out of their infrastructure projects,” written by McKinsey & Company experts Aaron Bielenberg, James Williams, and Jonathan Woetzel.

The report’s best practices are designed to guide governments in their decision-making regarding infrastructure investments, such as ensuring that investments have clear economic and public benefits.

“Governments should consider the effects of infrastructure investments on social equity to ensure that the potential economic benefits are inclusive,” according to the report. “It’s important to consider whether investments support a geographically and demographically diverse range of residents — for example, across income levels, urban and rural areas, and racial and ethnic lines.”

In fact, the McKinsey authors said investments that advance the economic opportunities of the people most in need of them often receive greater consideration.

That’s a premise seemingly aligned with the intent of the federal government’s EB-5 Immigrant Investor Program, which exists to generate foreign investment in economically distressed American communities and rural areas in exchange for foreign investors receiving a green card for themselves and their families.

Projects that include EB-5-funding, for instance, must be constructed in specially designated high-unemployment targeted employment areas (TEAs) that are now designated by the U.S. Department of Homeland Security’s U.S. Citizenship and Immigration Services (USCIS).

Specifically, EB-5 funded projects must have TEAs that have experienced an average unemployment rate of at least 150 percent of the national average unemployment rate and include cities and towns with a population of 20,000 or more outside of metropolitan statistical areas, according to USCIS, which says the stipulations “help direct investment to areas most in need and increase the consistency of how high-unemployment areas are defined in the program.”

To achieve what McKinsey experts cited as a pipeline of such high-quality projects having social benefits, governments should base their project selections on “reliable data and analytics, robust financial models, and designs that meet the needs of citizens.”

“They should consider both the direct impact of an infrastructure project and the indirect effects on the rest of the economy and society,” the McKinsey authors noted.

Such effects, they added, include improvements in the residents’ quality of life, such as by reducing highway traffic “by building a new express lane so that drivers have more time to spend with their families and communities,” or those projects having social and health benefits — like more U.S. citizens being able to access healthcare facilities located closer to their homes.

In fact, investments made through regional centers can take advantage of a more expansive concept of job creation that includes both indirect and direct jobs, says USCIS, which defines a regional center as any economic entity, public or private, that’s involved with promoting economic growth, improved regional productivity, job creation and increased domestic capital investment.

And there are EB-5 foreign investors interested in funding medical facilities, such as the Birmingham, Ala.-based Sunbelt EB-5 Regional Center, one of more than 1,200 nationwide regional centers designated by USCIS to sponsor capital investment projects for investment by EB-5 investors.

Sunbelt — which says it provides investor capital not only for economic growth in its region, but to “make a difference in people’s lives” — received its original USCIS designation as an EB-5 Regional Center initially for the healthcare industry and more recently has grown into other industries, including steel.

One critical way to ensure more inclusive benefits from infrastructure is to engage with the public, the private sector and civil-society stakeholders on a project’s design and implementation, according to the McKinsey report.

“Governments can use public consultations to share information (including the results of economic-, environmental-, and social-impact studies) and solicit feedback on potential projects,” write the authors. “That will increase not only the public’s satisfaction with the infrastructure projects ultimately selected but also the likelihood of equitable outcomes.”
Illustrating such successful community engagement, the authors pointed to the development of a 200-mile power-transmission line in Oregon as an example.

“Early in the permitting process, the project’s sponsor reached out to relevant federal, local and state agencies; Native American tribal authorities; and other affected stakeholders. A project team gathered data about the interests of all stakeholders and formed an intergovernmental working group to engage nongovernmental stakeholders,” the report says. “The team then built a website that featured a road map, informing key stakeholders about their roles and ways of contributing to the planning process.”

Taking such steps early in the process can help ensure that governments select and execute infrastructure projects that support the affected communities and fairly distribute the benefits, wrote the McKinsey authors.