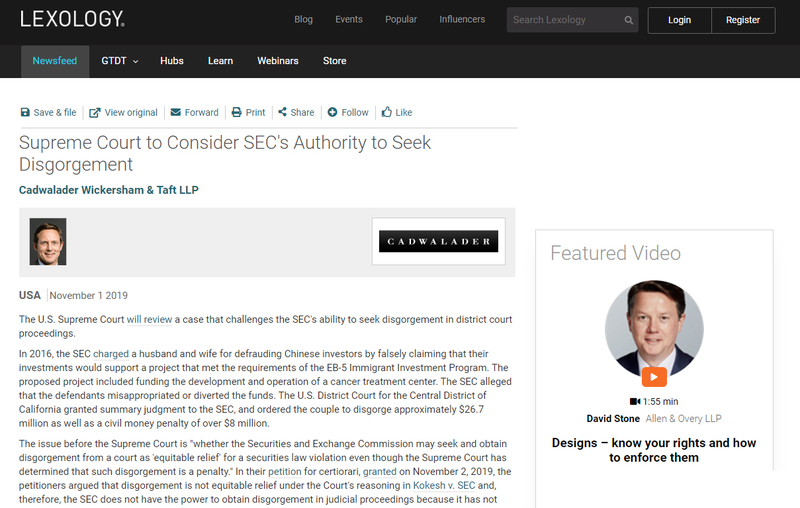 The U.S. Supreme Court will review a case that challenges the SEC's ability to seek disgorgement in district court proceedings.

In 2016, the SEC charged a husband and wife for defrauding Chinese investors by falsely claiming that their investments would support a project that met the requirements of the EB-5 Immigrant Investment Program. The proposed project included funding the development and operation of a cancer treatment center. The SEC alleged that the defendants misappropriated or diverted the funds. The U.S. District Court for the Central District of California granted summary judgment to the SEC, and ordered the couple to disgorge approximately $26.7 million as well as a civil money penalty of over $8 million.

The issue before the Supreme Court is "whether the Securities and Exchange Commission may seek and obtain disgorgement from a court as 'equitable relief' for a securities law violation even though the Supreme Court has determined that such disgorgement is a penalty." In their petition for certiorari, granted on November 2, 2019, the petitioners argued that disgorgement is not equitable relief under the Court's reasoning in Kokesh v. SEC and, therefore, the SEC does not have the power to obtain disgorgement in judicial proceedings because it has not been authorized by Congress to do so.