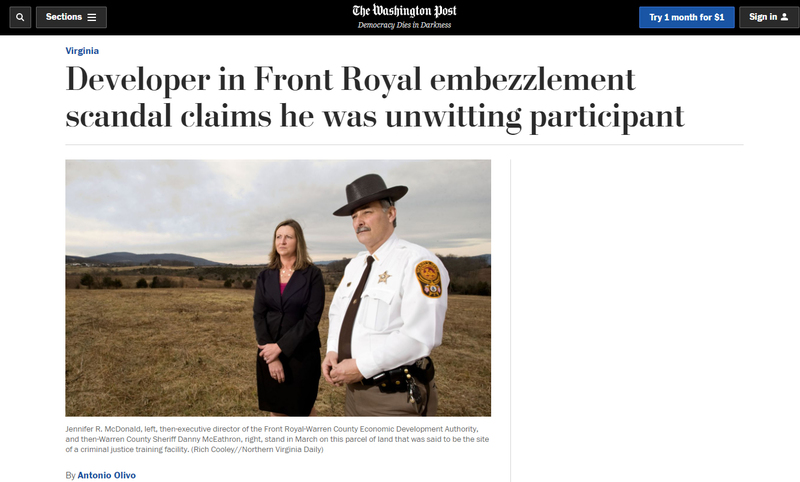 Jennifer R. McDonald, left, then-executive director of the Front Royal-Warren County Economic Development Authority, and then-Warren County Sheriff Danny McEathron, right, stand in March on this parcel of land that was said to be the site of a criminal justice training facility.

The Virginia developer at the center of a massive, still-unfolding embezzlement scandal is seeking $13.5 million in damages from what he says are false claims against him in a lawsuit filed by the Warren County economic development authority.

Truc “Curt” Tran — whose plan to build a data center on a former Superfund site 70 miles west of Washington allegedly launched the $21 million scheme that led to multiple criminal indictments — says in a new court filing that he was an unwitting participant in the proceedings.

Authorities allege that the scam was orchestrated by Jennifer McDonald, the authority’s former director.

Tran has not been charged with a crime, but he is accused in the authority’s civil lawsuit of lying about his ability to finance the now-abandoned $40 million data center project and of fraudulently obtaining a $10 million loan from the authority, with McDonald’s help.

In a counterclaim filed this month, Tran argues that the negative publicity surrounding the authority’s allegations — heightened by ongoing state and federal criminal investigations — ruined his chances of finding investors for the data center and irreparably damaged his reputation and that of his Fairfax County-based government-contracting business.

Neither Tran, who lives in Great Falls and is seeking to be completely removed as a defendant in the lawsuit, nor his attorneys responded to messages seeking comment.

McDonald — who says she is innocent of the 28 state counts of embezzlement, money laundering and obtaining money through false pretenses that she faces in the state criminal case — did not return messages, and neither did her attorney.

Douglas Parsons, the current director of the economic development authority, referred questions to the agency’s attorneys, who did not return messages.

The embezzlement scandal has rocked the small Front Royal community, particularly after former county sheriff Daniel T. McEathron killed himself in May in the face of allegations that he and McDonald stole $3.5 million in authority funds and used it to buy four properties.

McEathron had not been charged with a crime. But several others besides McDonaldhave been charged with felonies, including her husband, Samuel North. Last month, all five members of the Warren County Board of Supervisors, County Administrator Douglas Stanley and current and former board members of the authority were charged with misdemeanor counts of misfeasance and nonfeasance for allegedly allowing the embezzlement and misconduct to occur.

Tran says in his court filing that McDonald used his plans to build a three-building data center complex — on a 30-acre portion of the former Superfund site that once hosted the Avtex Fibers rayon manufacturing plant — to advance her own interests.

In one alleged scam, Tran says, McDonald forged his signature to make it look like he had agreed to finance a police academy to be run by McEathron.

Tran also claims that McDonald falsely informed him that $1.5 million he collected from the authority in reimbursed construction costs for the data center project came out of a state grant. He says he later learned the grant didn’t exist.

And Tran accuses McDonald of lying about the site’s suitability for new construction, allegedly telling him that the dirt was “so clean you could eat off it,” when it still contained chemical waste.

Finally, Tran argues that he obtained the $10 million loan for the project legitimately, and has been making monthly payments on it of $42,160, which a Warren County attorney confirmed to The Washington Post.

The authority’s board approved the loan as a way to start construction on the data center while Tran rounded up financing through the federal EB-5 investment visa program, Tran claims in his court filing.

After the economic development authority filed its lawsuit in March, records show, Tran’s company was terminated from the visa program, which allows foreign investors a path to U.S. citizenship in exchange for the jobs created by their money.