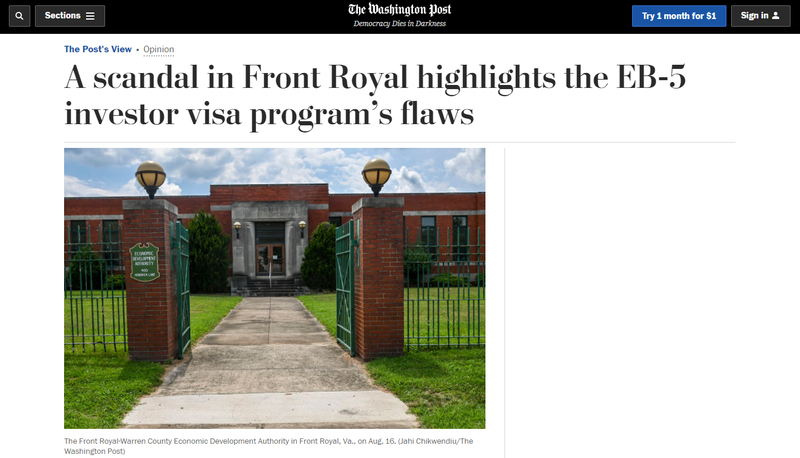 BEST KNOWN to Washingtonians as the northern gateway to Shenandoah National Park, rural Front Royal, Va., has been making news lately for big-city-style scandal. Some 14 current and former high-ranking public officials of surrounding Warren County, elected and non-elected — including five members of the Board of Supervisors — have been indicted for various crimes involving chicanery at the Front Royal-Warren County Economic Development Authority. Facing a civil lawsuit in the case, the former Warren County sheriff killed himself in May.

The officials stand accused of siphoning millions of dollars from revitalization work on the former site of an industrial plant and other projects. The case demonstrates spectacularly, but not for the first time, the pitfalls of often loosely supervised local efforts to attract business. Just last year, a former economic development official in Montgomery County pleaded guilty to embezzling $6.7 million.

What gives the Front Royal case a measure of national policy importance is the role of a federal program — the EB-5 investor visa. Part of the scandal involves plans to bring a data center and retail complex to 440 acres where a rayon factory once stood. Warren County economic development officials said they had recruited a developer who would fund it in part with $40 million from 80 wealthy foreigners, who, in turn, would get conditional permanent residency visas, known as EB-5 visas, if they ponied up the funds. Alas, the investment failed to materialize; the developer, among others, faces a civil fraud lawsuit by the economic development authority. The plot thickens: Developer Truc “Curt” Tran is now countersuing, arguing that corrupt Warren County officials forged his signature on documents and otherwise misled him and that the allegations against him are “completely baseless.”

Controversies such as this — and worse — have surrounded the EB-5 program since it began in 1990. It was intended to create jobs by attracting foreign capital. Over the years, the program has been beset by bureaucratic snafus and outright fraud in which both U.S. communities and would-be overseas participants have been victimized; yet it survives, in part because politically connected real estate developers use it to fund downtown hotel development cheaply.

To its credit, the Trump administration issued tightened rules this year, including by limiting gerrymandering of supposedly economically stressed areas. If these rules had been in effect a few years ago, the Front Royal events might not have occurred. Two longtime Senate critics of EB-5, Charles E. Grassley (R-Iowa) and Patrick J. Leahy (D-Vt.), have introduced a bill to reform the program further, by adding safeguards against corruption and potential national security breaches — a concern given that a disproportionate number of would-be EB-5 investors have come from communist China.

Nevertheless, the bill would give EB-5 five more years of statutory life, even though developers have abundant alternative sources of market-rate funding, the United States is not struggling to create jobs — and the program has never created many. What it has created, time and again, is confusion and false hope in places such as Front Royal.