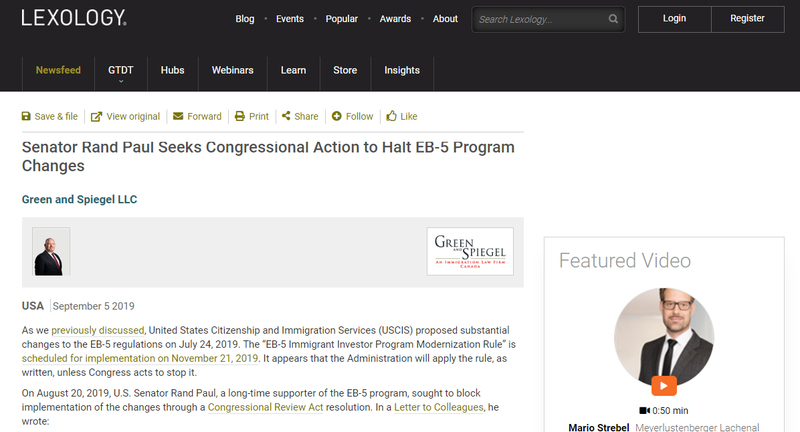 As we previously discussed, United States Citizenship and Immigration Services (USCIS) proposed substantial changes to the EB-5 regulations on July 24, 2019. The “EB-5 Immigrant Investor Program Modernization Rule” is scheduled for implementation on November 21, 2019. It appears that the Administration will apply the rule, as written, unless Congress acts to stop it.

On August 20, 2019, U.S. Senator Rand Paul, a long-time supporter of the EB-5 program, sought to block implementation of the changes through a Congressional Review Act resolution. In a Letter to Colleagues, he wrote:

“By significantly raising the minimum investment levels required for foreign investors to become eligible petitioners under the EB-5 program, this rule may undermine the very purpose of the program, which is to create jobs and grow the economy. Moreover, the rule would severely restrict the role of the states in determining targeted employment areas… Taken together, these regulatory changes will disrupt regional center operations and are likely to reduce the level of foreign direct investment in the U.S. economy.”

As written, the new rules – specifically those nearly doubling minimum investment amounts – will likely reduce the number of EB-5 filings and adversely impact the overall effectiveness of a program that has successfully channeled foreign investment into the US economy. Senator Paul’s efforts to delay implementation may open a window for a broader legislative effort to address EB-5 program challenges like the country cap and adjudication delays. We have previously detailed our opposition to the EB-5 Modernization Rule, although our concerns were largely ignored. We accordingly advise clients to interested in EB-5 to move forward as quickly as possible given significantly worse terms starting November 21.