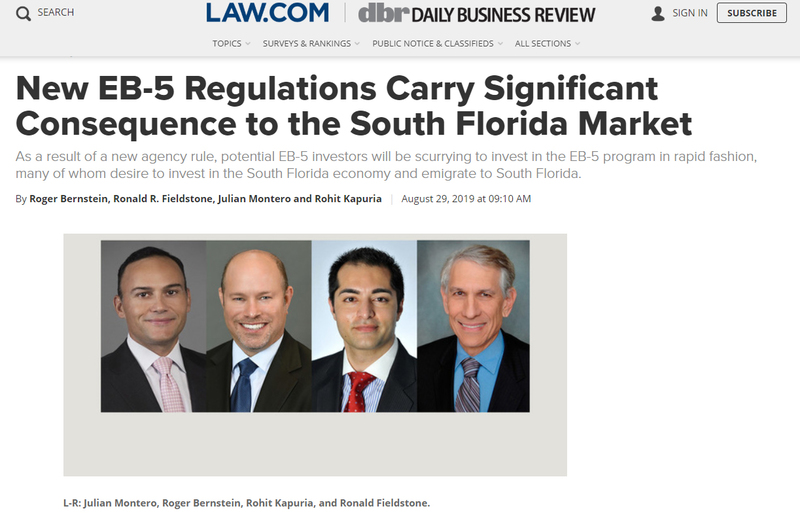 As a result of a new agency rule, potential EB-5 investors will be scurrying to invest in the EB-5 program in rapid fashion, many of whom desire to invest in the South Florida economy and emigrate to South Florida. On July 24, U.S. Citizenship and Immigration Services (USCIS) published a final rule amending the Department of Homeland Security (DHS) regulations governing the employment-based, fifth preference (EB-5) immigrant investor classification and associated regional centers.

The final rule provides, among a number of other changes:

Fortunately, the regulations are NOT retroactive and investors have until Nov. 20 to file I-526 petitions under the existing regulations. Undoubtedly, this will result in a significant uptick in EB-5 investment activity in South Florida as investors scramble to lock in the lower $500,000 minimum investment.

Of major import, the rule increases the minimum investment amount in a TEA from $500,000 to $900,000 and increases the standard investment amount from $1 million to $1.8 million. The price increases were widely anticipated as the investment amounts had not been increased since the EB-5 program’s inception almost 30 years ago. Most industry analysts feel the market will absorb the price increase for the TEA designated projects given that over the past five years, demand for the EB-5 visa far exceeded the 10,000 per year visa allocation. Additionally, because of the increase in the investment threshold, projects will need approximately 45% fewer investors.

Perhaps equally important, the final rule eliminates the ability of a state to confirm TEA designation; instead, DHS will make such designations directly, using a uniform but far more stringent standard. Stripping the designation authority away from each state and giving DHS sole authority to designate what areas qualify as TEA’s as a consequence of what some industry and elected officials felt was a disproportionate investment in low unemployment urban centers. DHS felt that states were far too generous in granting TEA designations using an analysis that currently permits aggregation of contiguous census tracts instead of adjacent census tracts (the latter of which will now be required by DHS). A Government Accountability Office study recently determined that 97% of qualified investment funds were flowing into high density urban targeted employment areas. As a result, the new rule seeks to limit gerrymandering of contiguous census tracts in an effort to direct investments into truly high unemployment and rural areas.

Barring a legislative change or a lawsuit enjoining the final rule, as of Nov. 21, this will be a new reality. The new rule is likely to reduce the number of EB-5 projects in major metropolitan jurisdictions. However, it is expected that South Florida will fare slightly better because of its unique geography (many downtown projects as well as midtown projects will still qualify under the new rule). Nevertheless the impact of the new rule will still be felt. According to a South Florida economist, Scott Barnhart, up to 70% or more of existing South Florida EB-5 projects may no longer qualify as TEA designations under the new rule.

The positive news is that South Florida will remain a top EB-5 market. Our region has experienced a significant influx of LatAm EB-5 investors over the last few years and this trend is likely to continue, despite the expected increase in investment amount. The primary driver for LatAm EB-5 investors continues to be socio-economic and political challenges felt in several LatAm countries. Furthermore, given its close cultural, geographic and economic ties to the region, South Florida will continue to be the primary beneficiary of capital from LatAm.

It is important to recognize the many benefits that a healthy EB-5 program represents to South Florida. The program will produce even more tangible economic benefits if Congress is able to pass meaningful and long-term legislative reform that provides visa backlog relief and a more timely adjudication of EB-5 petitions.

Roger Bernstein is a partner in Saul Ewing Arnstein & Lehr’s Miami office and is vice chair of the firm’s global immigration and foreign investment practice group.

Julian Montero is a partner in the firm’s Miami office who represents clients in general business and transactional matters including cross-border transactions. He regularly advises foreign investors on strategies for successfully acquiring or establishing businesses in the United States.

Rohit Kapuria is an attorney in the firm’s Chicago office where he focuses on corporate and securities law, including handling private offerings under the EB-5 investor visa program.