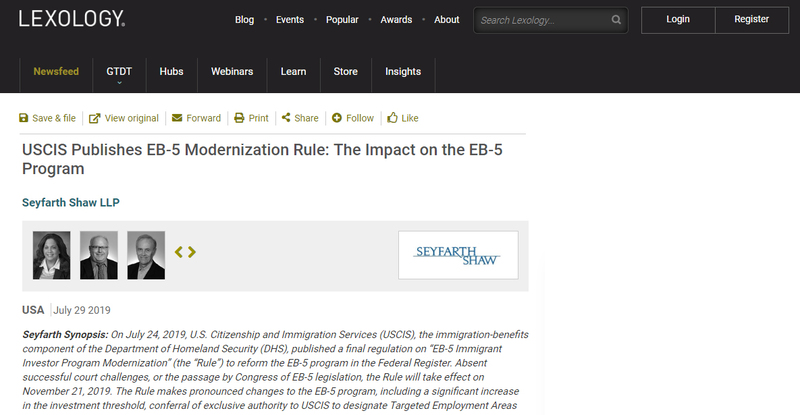 On July 24, 2019, U.S. Citizenship and Immigration Services (USCIS), the immigration-benefits component of the Department of Homeland Security (DHS), published a final regulation on “EB-5 Immigrant Investor Program Modernization” (the “Rule”) to reform the EB-5 program in the Federal Register. Absent successful court challenges, or the passage by Congress of EB-5 legislation, the Rule will take effect on November 21, 2019. The Rule makes pronounced changes to the EB-5 program, including a significant increase in the investment threshold, conferral of exclusive authority to USCIS to designate Targeted Employment Areas (TEAs), and retention of priority dates for petitioners. The text of the Rule can be found here.

The changes imposed by the Rule include the following:

The changes in the requirements for qualifying as a TEA include the following:

Given these major changes, such as a notable increase in the minimum investment amount, the change in the authority to designate TEAs, and the narrowed down definition of TEAs, it is foreseeable that there will be an influx of EB-5 applications in an attempt to be grandfathered under the current rules. This will certainly result in further application processing delays and possibly the further tightening of standards by USCIS.

The Rule further provides that there will be no loss of an investor’s immigrant visa priority date if there are any amendments to the project documents that may be required as a result of investor disclosures under the securities laws due to the changes in the EB-5 program implemented by the Rule. It remains to be seen how USCIS will apply this provision since the agency has kept in place its existing material-change policy which triggers a loss of priority date if a new I-526 petition is required.

A quick search on the internet shows many regional centers, and attorneys, are advocating the rapid filing of skeletal petitions in order to invest with the lower amount. A skeletal filing is made with very little information included on the source and trace of EB-5 funds by the investor. The 120-day delay between publication and implement of the Rule should make it easier to file a more fulsome application before the new standards take effect. Investors should be forewarned that the skeletal-submission approach may meet with rejection by USCIS (for lack of sufficient initial evidence) or trigger the issuance of a burdensome or impossible-to-fulfill USCIS request for additional evidence.

To the extent, however, that investors find themselves with no choice but to file something without all the relevant information and documentation, investors should at least take care to include any evidence of lawful source of funds in order to avoid requests for additional evidence from the USCIS or even denials. It is also critical to review the potential source of funds with a qualified attorney to identify any potential issues with respect to either the ability to verify the source of funds or the compliance of the proposed source of funds with the requirements of the EB-5 Program as it is impossible to make changes once the investment and filing are made.

There is sometimes an alternative source of funds available which may be easier to satisfy the EB-5 requirements than the original source considered. A dialogue with an expert could ferret that information out. For example, an investor considering the use of a gift from a family member may not understand they will need to detail the legal source of those funds, which may prove more difficult than first contemplated as the gift or may not be willing or able to provide the level of detail in terms of documentation the USCIS is expecting to see.

In the context of a regional center investment, investors should be careful to diligence projects, including a detailed review of the offering documents, economic analysis, and business plan, in order to protect their investment and ability to obtain permanent residence. Consideration should be given as to the impact of a slowdown of investment capital coming into the project after the thresholds are increased, leaving projects at risk of not being completed or delayed because of inadequate funds. Investors should inquire about that impact if any.

Of course, this final regulatory action was preceded by several years of activity on Capitol Hill in pursuit of changes to the EB-5 program, many opposed and blocked by industry, but which are reflected in the final regulation. It’s possible that dissatisfaction with the Rule will create pressure on the Hill to revisit many of these provisions and result in a compromise that would trump the Rule. However, it’s a lot easier to kill something on the Hill than to get it enacted. Further, it is very unclear how the replacement of Representative Bill Goodlatte (R-VA.), who was much involved in past legislative EB-5 debates, as chair of the Judiciary Committee with Representative Jerry Nadler (D-NY) affects the Hill’s dynamics. Needless to say, Chairman Nadler also has other priorities attracting his attention at this time.