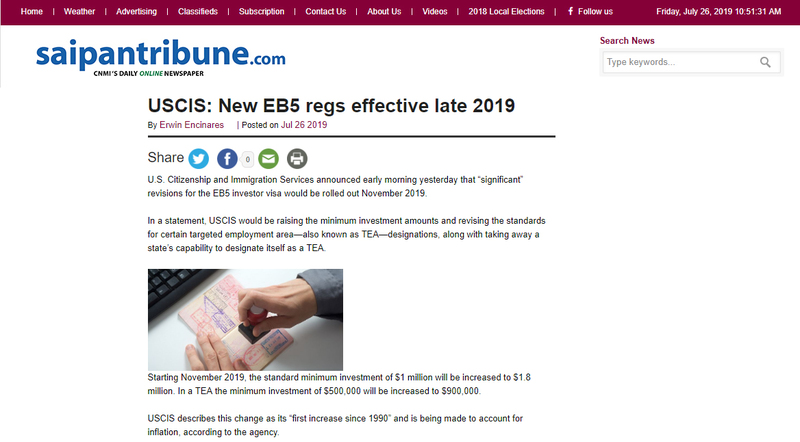 U.S. Citizenship and Immigration Services announced early morning yesterday that “significant” revisions for the EB5 investor visa would be rolled out November 2019.

In a statement, USCIS would be raising the minimum investment amounts and revising the standards for certain targeted employment areas—also known as TEA—designations, along with taking away a state’s capability to designate itself as a TEA.

USCIS describes this change as its “first increase since 1990” and is being made to account for inflation, according to the agency.

The new regulations on the visa also remove a state’s capability to designate itself as a TEA. USCIS now holds that capability.

According to previous regulations, a state is designated as a TEA if its unemployment is 150% of the national average. However, due to the manipulation of boundaries of an electoral constituency, according to the USCIS, it eliminated that capability for states.

“Gerrymandering of such areas was typically accomplished by combining a series of census tracts to link a prosperous project location to a distressed community to obtain the qualifying average unemployment rate,” USCIS noted.

“[The U.S. Department of Homeland Services] will eliminate a state’s ability to designate certain geographic and political subdivisions as high unemployment rates; instead, DHS would make such designations,” it added.

The statement further noted that the designations would be directly based on revised requirements in the regulation limiting the composition of census tract-based TEA’s.

“These revisions will help ensure TEA designations are done fairly and consistently, and more closely adhere to congressional intent to direct investment to areas most in need,” USCIS stated.

In the CNMI, Tinian’s Alter City Group is a company that had its EB5 designation approved last August 2018. Saipan Tribune attempted to reach out to the company regarding possible repercussions on the new regulations but there was no response as of press time.